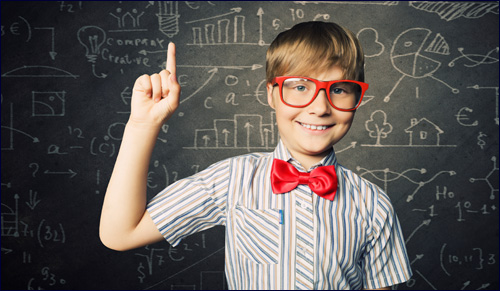 Studies show that most young kids are creative geniuses. Then what happens?

The Brooklyn wedding hall can hold about 500 adults. There were close to 1000 children in the room, all boys. Thankfully, the sugar had not yet been served. We were taking part in a special father/son learning program that had offered food, prizes, and performances by a magician and a master storyteller.

The first performance was to begin and the room was relatively quiet until the magician asked for a volunteer from the audience. 750 little hands shot up in unison, joined by 750 choruses of “Me! Me! Me!” The aggressive hand raising techniques from my childhood classrooms had not changed much over the years. The magician tried to narrow the field of candidates and said, “For this trick I’ll need someone strong, and someone who can sing, as well. And most important… I need someone who is smarter than me!”

I looked around and 750 hands remained raised.

I tried to imagine this scenario in a college classroom with a professor asking for volunteers from among his college students. At the first request perhaps 20 percent of the students would offer their services. If the professor proceeds to add further qualifications such as artistic talent or physical strength, a bunch would lower their hands. I looked at my son and wondered if in the next 15 years he’d go from “Me! Me! Me” to “Him! Him! Him!” And if so, why?

Dr. Ken Robinson, a British professor of education and a noted author and lecturer, describes a study of creativity that involved 1500 preschool children. The researchers gave children paper clips and asked them to imagine other uses for the item that did not involve holding sheets of paper together. The researchers had previously determined that a person who could think of 50 or more uses for a paper clip would be considered a creative genius.

98% of young children were creative geniuses. By adulthood it dropped to 2%.

They were surprised to learn that 98% of young children achieved this level. The test was then given to the same group of children at age 10 and age 15. The number of creative geniuses had dropped to 50% and 30%, respectively. By young adulthood the number who were able to think up multiple uses for the paper clip dropped to 2%!

What had happened to all those who were potential creative geniuses 15 years prior?

Dr. Robinson explains that children are born with the ability to see things from many angles, so they are naturally creative. This allows them to achieve high scores on the paper clip test. When children are educated in school they usually learn that there is one way to answer questions or to solve problems. Slowly but surely their natural creativity is stifled.

I witness this idea every morning around 6 am after I’ve used up all my snooze button chances. I slowly make it down to the basement where my three children have been up since 5 am creating a new universe out of a combination of Legos, Clics and Magna Tiles, all held together by paper clips. Creativity and energy go hand in hand. For a child, life is exciting because there is so much to accomplish.

In the story of Joesph and his brothers, Benjamin is taken captive by Joseph, the viceroy of Egypt. Yehuda, who had assured his father Yaakov that Benjamin would return home safely. stands up for his youngest brother and tells Joseph, “How can I return to my father when the ‘na’ar’ (young man) is not with me?” The simple meaning of this verse is that Yehuda cannot bear the thought of facing his father back in Canaan without his younger brother at his side. The Chassidic Rabbis offer a deeper explanation. Yehuda’s rhetorical question is one that all of us have to ask ourselves after our lives of 120 years. How can we ascend and stand before our Father in Heaven when the ‘na’ar’ – that part of us that is young – is no longer within me? God has given us all a gift of youth and creativity; we cannot let that flame wither.

It’s been a long day. After 14 hours of non-stop activity I convince my kids to get into pajamas despite their protests. As I tell them a story and I watch them slowly drift off to sleep, I gaze at them and ponder, what is the secret to their inexhaustible drive and passion? What is it that excites them so much about life?

Every morning when my kids go to the playroom, they don’t remake the project they made the day before; they create something totally new.  Maybe it will work, maybe it will fail. But they will relish the attempt to go where they hadn’t gone before. They are driven by curiosity and stimulated by the new information they obtain.

Adults have a tendency to become complacent. We’ve learned what we’re good at, and we’ve stopped doing what we’re not. Life then becomes routine, and the thrill of discovery becomes a thing of the past. How do we awaken the child within? Aside from spending more time with children, make the investment to learn a skill or a subject you’ve thought about but abandoned in the past – a language, an instrument, an athletic endeavor, or Torah wisdom. Once you’ve stepped out of your comfort zone you will be better equipped to challenge the status quo in other areas of your life and you’ll be enthused by what you discover. Tap into the creative genius inside.

Sorry to end the article so abruptly. My swim instructor is taking me into the deep end today.