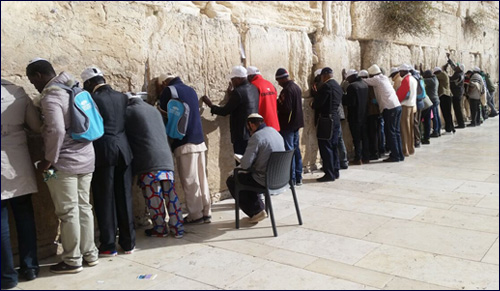 In Israel, taxi drivers are more religious than anyone you know outside of Israel. Anyone.

I have just returned from a trip to Israel, and just when I thought it wasn’t possible, I have learned new ways why I love the Land and its people. What follows are just a few of them.

1. In Israel everyone from the cashier at the supermarket to the guy at the local cell phone store – all people who you have never met – will call you “Mommy.” This will happen whether you are a mother or not, or whether you are a woman or not. I am neither. I believe it is a term of endearment meaning “sweetie” which at first I did not find very endearing, but then it grew on me. I came to enjoy being a Mommy.

2. Wherever you go in Israel, you may bump into a famous rabbi, so be ready with that existential question you’ve been thinking about. For example, I went to the Mahane Yehuda Souk in Jerusalem and saw former Chief Sephardic Rabbi, Rav Shmuel Amar. Just hanging out. If you look closely in this picture, you will see two of my favorite things: Rabbis and Halva. Together at last. 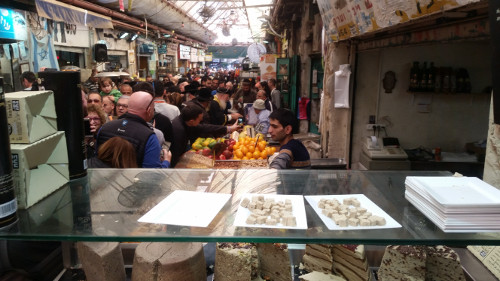 3. The weather in Israel is great. Who needs Florida when you have Israel? But Israelis have clearly been spoiled in this regard because if the temperature dips below 60 degrees Fahrenheit (15 Celsius), Israelis run for their lives. See this picture below. I wasn’t wearing a jacket and even worked up a little sweat, while these fine Israelis are wearing winter coats, scarves and ski hats like they are staving off hypothermia. Israelis are the toughest people I have ever met, except when it comes to weather. 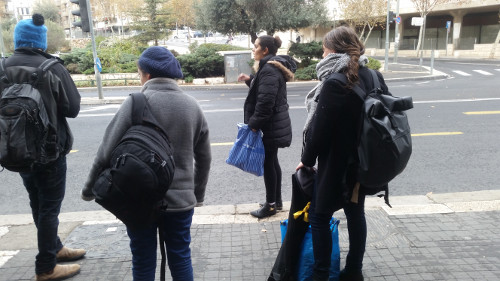 4. Israelis don’t like wasting time. This applies to many things including how they name certain foods. I saw a juice stand selling “mitz yarok”, or “green juice”; a lolly pop is called “sucaria al makel” or “candy on a stick”; and cream cheese is called “gvinat shamenet” or “fat cheese.” Not leaving much to the imagination there! I also found the name of this store interesting. “Moreno: Mishpacha Shel Pitzuchim” which means, “Moreno: A family of Nuts.” The store does indeed sell nuts, but I’m not sure what this says about the Moreno family. 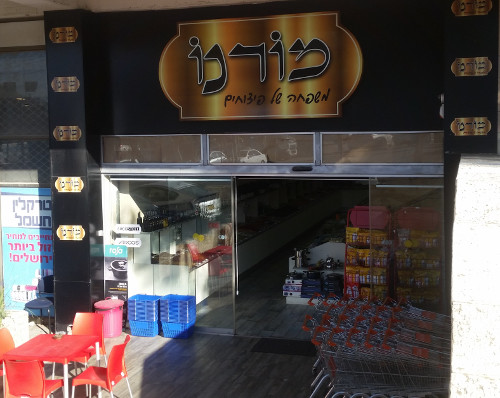 5. Israel is the only country where proprietors tell you that their restaurant is not kosher. I don’t think if you walked into a McDonald’s in New Jersey they would inform you that their establishment is not kosher. But walk into a non-kosher restaurant in Israel, and you will find out very quickly. This will inevitably be followed by an explanation as to why they aren’t kosher – really all of the ingredients are kosher but they are open on Shabbat. Or their restaurant isn’t kosher but their home is, and you are invited for Shabbat dinner anytime.

6. Even the animals in Israel are nosey. I have heard it said that Israelis are a nosey people – this is a misunderstanding of their intention. They just care about you and want to know where you are from and where you are going – at all times. This attribute seems to extend to the locals animals. Seriously, the way the cats looked at me was haunting. It’s as if they were saying, “Where are you going? When are you going to be back? Are you going to the souk? Can you pick me up some Whiskas while you are there? I like the one with the little pieces of Halva. Ask Itzik, he’ll know which ones I like.”

7. In Israel, taxi drivers are more religious than anyone you know outside of Israel. Anyone. On a ride to the bus station I was given a 20 minute mussar schmooze on why I should strengthen my belief in Hashem, and internalize the fact that He runs the world, and protects the Jews of the Land of Israel and how we are His Chosen People. For the record, this Taxi driver claimed that he was “not religious.”

8. Israelis have an interesting relationship with the English language. So many of them speak English so well, and this makes their refusal to use things like spell check or Google Translate so confounding. Take this sign for example, “Coation Trucks Crossing.” People of Israel: there is this amazing thing called the Internet. Apparently, your Nation has mastered it. Please use it prior to making road signs, menus, T-shirts or anything else that has English writing on it. 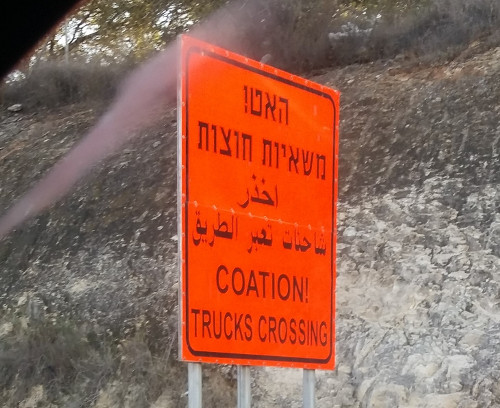 9. In Israel, you can’t judge a book by its cover. A taxi driver may claim that he is not religious, yet he is the most religious person you know (see above) or a Hassidic Jew could be in downtown Jerusalem rocking out on his clarinet. You never know! 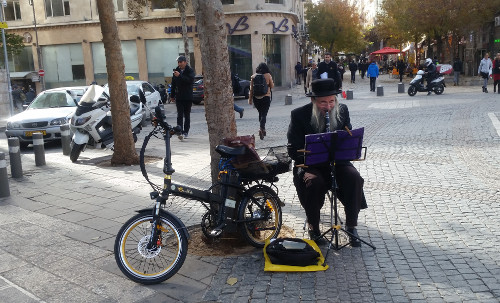 10. Israelis love nick names. I was in Israel for ten days and not once was I called by my own name. I was called “tzadik” (righteous person), “Rabbi”, “bachur” (young man – that was quite generous), and I think one person even called me Hummus. I have no idea why. Perhaps it was my chick pea cologne. In Israel, you are already friends with people before you even meet them, so why not give them a pre-emptive nick name.

11. Israel is a central place for many different nations. Tour groups from countries around the world come and visit. And Israel welcomes them all. Take this group from Nigeria below at the Western Wall. Nothing amusing about this, just really nice. 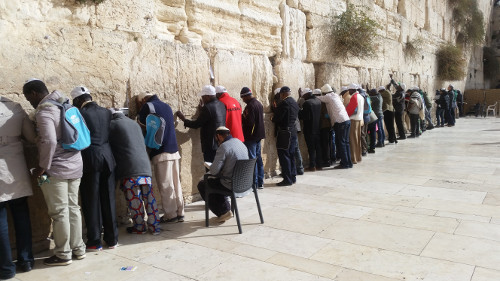 12. What do they do at half time during sporting events where you live? Put forward an overweight fan to try and score a basket from half court whereupon we laugh at him as he embarrasses himself as he pulls his hamstring? Dogs that jump through hula-hoops? A lady who can balance spinning plates on her head? Well I went to a Poel Yerushalayim basketball game (Amar’e Stoudemire’s new team) and you know what we did during half time? We prayed the Maariv evening service. Only in Israel. OK and maybe New York. But all of the food at the concessions was kosher. Beat that New York! 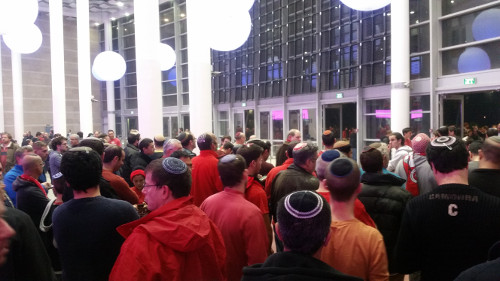 13. And the number one reason why I love Israel…my Mom lives there! She moved a year ago (you can read her story here and see her aliyah pic below). There are also many other mothers who live in Israel, and of course according to the cashier at the supermarket and the guy at the cell phone store, everyone is a “Mommy” in Israel. So in conclusion, go to Israel and visit all of those Mommies. 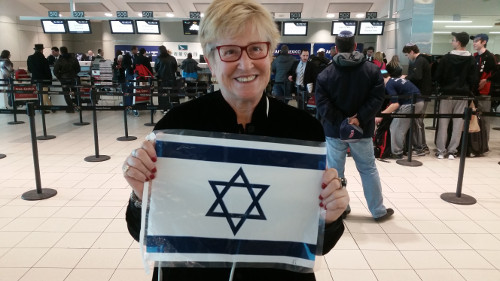 Communication Breakdown
Don’t Believe in Other Gods Versus God is One
Seeing Without Eyes
Why Shouldn’t We Eat Whatever We Want?
Comments
MOST POPULAR IN Jewlarious
Our privacy policy
Aish.com Is Looking for Great Writers