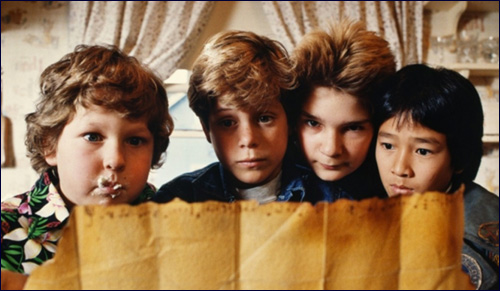 What do the Goonies and the Jewish people have in common? As it turns out, a lot.

In 1985, Richard Donner and Steven Spielberg released what soon became a classic: Goonies. It’s about a group of kids who go on an adventure attempting to locate a long since buried treasure in the hopes of staving off a group of real estate developers who have slated their homes for demolition. For anyone who grew up in the 80s, this was required viewing.

While the film was released over 30 years ago, it remains a cult classic and is still dissected in fan forums today. So we thought that we’d add another aspect for the fans to dissect:

8 Reasons Why Goonies is the most Jewish Movie of the 80s:

Lawrence "Chunk" Cohen, played by Jeff Cohen, takes Goonies from a standard Jewish-y movie to Fiddler on the Roof territory. Chunk is the fat loveable neighbor who is forced to do the famous “truffle shuffle” to gain entry into Mikey’s house. For the uninitiated, the truffle shuffle was the awkward dance where Chunk had to show off his…well…chunk. When caught by the Fratellis, Chunk does what any other good Jewish boy should do in a life threatening circumstance – he davens – in Hebrew (“Baruch ata …”). And who can forget when Chunk is threatened by the Fratelli crime family that he should tell “everything”, he spills the beans that he took his Uncle Max’s toupee and glued it on his face when he played Moses in his Hebrew school play. Finally, after he retired from acting, Jeff Cohen went to law school and became a successful entertainment lawyer in Los Angeles. It doesn’t get much more Jewish than that. 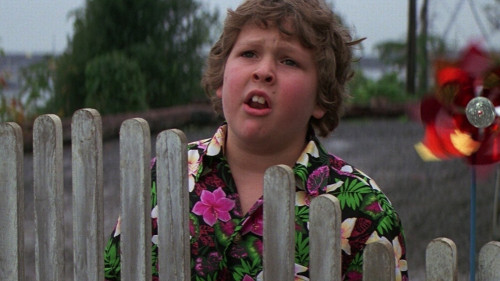 Chunk, just prior to the Truffle Shuffle

2. All of the Goonies are Jewish

All of the Goonies are Jewish. Even if they don’t appear to be at first glance. Let’s take a closer look:

Chunk, Jewishness is clear as discussed above.

Mikey, is the quiet leader of the group. He’s an idealist who doesn’t take no for an answer and he’s got a severe case of Asthma. Jewish.

Mouth, played by Corey Feldman (Jewish) is a wise cracking know it all who, underneath his wisecracking exterior wants the best for his friends and his community. Jewish.

Data, who is technically supposed to be Chinese, is a tinkerer by nature, who loves to invent things, even though most of his inventions don’t work. Does this remind you of your Uncle Morty who loves to tinker in the garage? Of course it does. Data is Jewish.

Brandon, Mikey’s older brother, may or may not be an official member of the Goonies. But he’s been charged by his mother with looking after his little brother and it’s a job he takes seriously. And this is a job that all Jewish mothers have given to older siblings from time immemorial. So Brandon – Jewish. 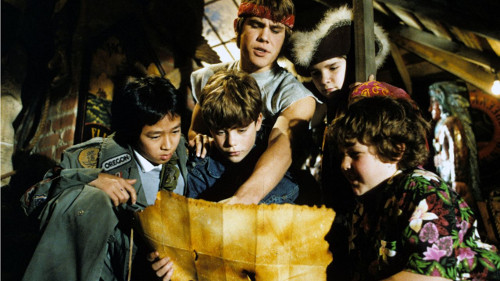 The Goonies, all looking very Jewish

3. The Goonies Hollywood “Parents” are Jewish

The film’s Executive Producer was Steven Spielberg, Producer was Harvey Bernhard and Director was Richard Donner. In case you were wondering Donner was born Richard Donald Schwartzberg. Exactly.

4. The Bad Guys in this film are Real Estate Developers

In most movies bad guys have maniacal laughs and strange pets and want to destroy the world. In Goonies, the bad guys are real estate developers who are trying to foreclose on homes to further develop an expanding country club. Only in a Jewish movie would the kids be fighting real estate developers. According to insiders, in the proposed sequel to Goonies, the bad guys were going to be the School Tuition Committee.

5. The Goonies are on a Fundraising Trip

The Goonies decide that the only way that they can save their homes from the evil real estate developers is to go hunting for One Eyed Willy’s treasure. In other words, they are going on a fundraising trip. How many Jewish institutions have done this? The shul/school/institution is in trouble? Let’s go on a trip to Willy Sapperstein’s house who we hope will give us a large donation in the memory of his mother Sadie to save the shul. Apparently in Goonies II, after the kids save their homes with One Eyed Willy’s treasure, they were to build a community centre which would include the Mr. & Mrs. One Eyed Willy Social Hall.

6. The Goonies have a Chance to Escape but Prefer to Continue Wandering

The Goonies are stuck underground and they almost get killed by One Eyed Willy’s traps when they stumble across the wishing well and obnoxious Troy whose family owns the country club. They scream for help and Troy and his doofus friends agree to pull them out. But Mikey gives a rousing speech and they decide to continue on their adventure and keep wandering. If there’s one thing that Jews know, it’s wandering. 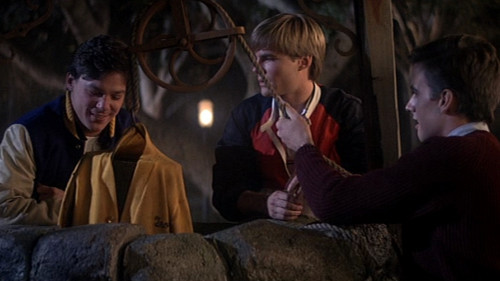 7. The Other Bad Guys are from the Country Club

Troy’s family owns the country club that’s trying to displace the Goonies and Jews and country clubs have a complicated relationship. We’ve always been fascinated by their golf carts and white sweaters, but haven’t always felt wanted. Although it was never stated explicitly in the movie, it wouldn’t be surprising to learn that Troy’s family country club had a sign that said “No Goonies Allowed.”

8. The Jewey Jew Save the Day

Just as the Goonies find One Eyed Willy’s treasure, they are overtaken by the Fratelli crime family who force them to drop the treasure and walk the plank or else they will kill them. All seems lost until Chunk and his new friend Sloth come to the rescue! Chunk who had been locked in a freezer where he was gorging on ice cream befriended Sloth, the neglected and abused Fratelli brother who helps Chunk escape and rescue his friends. The Goonies escape with just enough valuable gems to pay off their homes and stave off foreclosure. Once again, this is all very Jewish. As a people we can relate. A small group of outsiders who have been knocked down, but when we work together we can accomplish anything. Long live the Jewish People…and the Goonies! 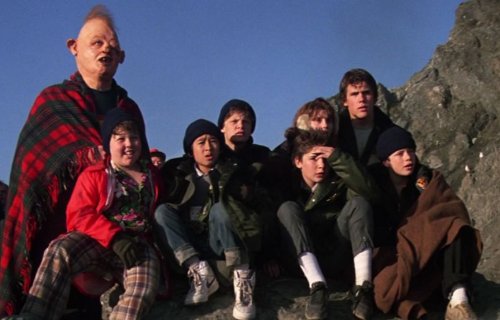 Together the Goonies save the day

Superman vs. the Nazis: How Comics Influenced American Public Opinion
Is Grease the Word?
Dried Fruit Compote
Scientific Curiosity and the Divine Encounter
Comments
MOST POPULAR IN Jewlarious
Our privacy policy
Aish.com Is Looking for Great Writers