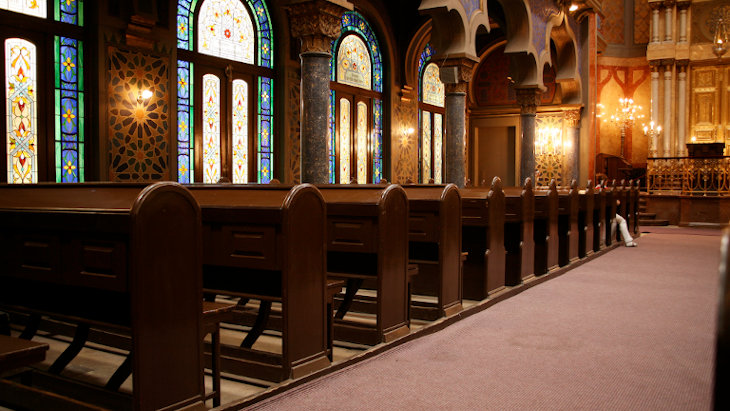 We pray there, we learn there, we eat there, and yes, we joke there.

They say that a rabbi is supposed to open his sermon with a joke. After all, shul shouldn’t be a lifeless, stuffy place. We pray there, we learn there, we eat there, and yes, we joke there. So how about a few jokes about things that take place at shul. Would it hurt?

The rabbi was distressed at the lack of generosity among his congregants, and he prayed that the rich should give more charity to the poor.

"And has your prayer been answered?" asked his wife.

"Half of it was," replied the rabbi. "The poor are willing to accept."

David Goldberg had never celebrated Shabbat before but he was invited by his observant friend Moishe to shul. Moishe took him to the “Kiddush Club” where they proceeded to have a number of l’chaims – scotch, bourbon, wine – you name it.

Moishe was trying to explain to David some of the many laws relating to Shabbat when David said, “I’ll admit – I don’t fully understand all of the laws of Shabbat yet, but there’s one law that makes perfect sense.”

“No driving on Shabbos!”

Gladys Dunn started reading some books about Judaism and decided that she wanted to start going to shul. There was one near her house so she went early one Shabbat morning.

The shul itself was beautiful and the people seemed friendly but the Rabbi’s sermon seemed to go on and on. Worse, it wasn't very interesting. Glancing around, she saw many in the congregation nodding off.

Finally it was over. After the service, she turned to a still sleepy-looking woman next to her, extended her hand and said, "I'm Gladys Dunn."

She replied, "You and me both!"

Rabbi Epstein is standing before his congregation ready to give his High Holiday sermon. Unfortunately, he can’t focus on spiritual matters, as the physical ones are more pressing.

“Friends,” Rabbi Epstein begins, “unfortunately, I must report that a massive hole has been found in the roof of the synagogue.

Kiddush Buddy: Uses GPS to find all kiddushes in nearby shuls and reports which are hot, which are cold and how far they are from the cell phone owner.

Kid Finder: Works with implanted chip technology to locate your child and sound alarm if he/she leaves the synagogue.

Service Length Predictor: Gives real time estimate of when the service will end. Takes into account traffic delays such as unusually long lulav lines on Sukkot.

Snooze Alert: Recognizes snoring and slumping of cell phone owner during sermon and produces a gentle vibration to wake him from his slumber.

Pledge Counter: For use by shul gabbai to enter pledges made by congregants when they are called to the Torah during services.

Benjamin woke up one Saturday morning in a bad mood. When he came down to breakfast, he told his visiting sister Sarah angrily, "I'm not going to shul today!"

"Yes you are," Sarah replied calmly.

"No I'm not. I don't want to go there ever again! The people down there don't like me, they ignore me...they don't appreciate me at all...and I won't go back."

"You will go to shul today, and you will continue to go to," said Sarah with confidence, "and I'll give you two reasons. Number one, you're 45 years old and number two – you're the rabbi!"

Sharon is out shopping one day when she meets Rabbi Levy.

"Hello rabbi," she says. "How are you? I hope you are keeping well."

"Yes rabbi, it is," replies Sharon.

"I haven't seen you in shul now for quite some time," says Rabbi Levy.

"I know," says Sharon, looking quite embarrassed, "I stopped going to shul some time ago because every time I went, it was always the same old thing."

Shul Bulletin Board Typos and Blunders

One New York synagogue was notorious for its exclusiveness. One day a homeless Jewish man entered the synagogue, wanting to pray. He approached the rabbi and told him that he wished to join the synagogue. Not knowing what to say, the rabbi suggested that the homeless man take the night to reflect on which house of worship would truly suit him best.

The following day the homeless man returned to the exclusive synagogue.

Frustrated, the rabbi asked the man if he had done any introspection as he had suggested.

“Oh yeah,” replied the homeless man. “In fact, God came to me in a dream last night to discuss it with me.”

“God asked me what shul I wanted to daven in, and I said yours. And He said ‘Oh no, you won’t be able to get in there.’ And I said, ‘Why not?’ and He said, ‘Because I’ve been trying to get into that shul for years but I can’t get in.’”

A guy wanted to get into a shul on Yom Kippur, but realized that he was in trouble because at the temple near him, without a ticket they don't let you in.

He said to the doorman, "Look, I just want to give a message to a friend in there."

The guy at the door said, "Sorry, you can't go in without a ticket."

The first guy replied, "Just let me in for one minute, then I'll be right out."

"Alright," said the doorman, "but I better not catch you praying."

A Starbucks Star
It Takes A Lot Of Faith To Be An Atheist
How Instagram Brought Back This Nostalgic Soup
What Makes Eli Run?
Comments
MOST POPULAR IN Jewlarious
Our privacy policy