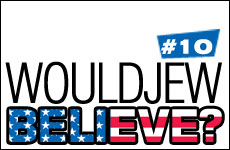 The place? A library. The section? "Jews' Businesses." The titles? The Jews - Why Are They Rich? The Most Effective Methods for Jewish Businesses, The Jewish Road to Wealth. Oyyy. Now what? An anti-Semitic librarian?! Here she comes. "You a Jew?! Very smart! Very good at business. Like an Einstein." Wait a minute! On which galaxy have we landed?

"You a Jew?! Very smart! Very good at business. Like an Einstein."

Not a galaxy ... a city. Shanghai! Perhaps the only place on earth with a best-seller titled The Jews' Business Wisdom and the Art of Proper Behavior According to the Talmud. And it's meant as a compliment!

Jews in China date back to the eighth century. Then, from the 1930s through WWII, Shanghai welcomed 18,000 Jewish refugees, escaping Nazi Europe. They developed a rich cultural and communal life until 1942, when, under Japanese rule, the Jews were forced into what was known as "The Shanghai Ghetto." After the rise of Communist China, virtually all fled to the newly recognized State of Israel. Today, Shanghai is home to 2,000 Jewish newcomers.

So, the next time you wonder why you can't exist without your weekly dose of take-out, it's not some meshugeh dietary need for dim sum. No ... it's a love affair that's been going on for over a millennium! And what better way for a Jew to show love, then to ess a bissel sweet and sour – not unlike Jewish and Chinese history. Now that's what I call "Kosher!"

(GIVE A SHUDDER!) HITLER NAMES HIMSELF GOD

Could the most despicable presence in history, architect of the Holocaust, the "devil" incarnate, do the ultimate evil – and attempt to replace God's word? Hitler tried. An institute in Germany unearthed a Nazi bible ordered by Adolf himself to expunge all references to Jews and make Nazism – and himself – holy doctrine. His instructions to his lackey writers?: "The Bible must become Jew-free and the German people must see that the Jews are the mortal enemy who threaten their very existence." The tome even includes 12 Nazi "Commandments." Several (edited) included: "Keep the blood pure!" and "Honour your Fuehrer and master!" Jewish words were eliminated. Out went Jerusalem, Zion, Hosanna, Galilee, and Moses, as well as mercy, and love, in the insidious 275 page sacrilege he called German with God. It was printed in 1941 and widely distributed. However, even Hitler and Himmler saw it as a fraudulent "panacea." Both believed in their ultimate domination of a pagan world that goose-stepped to their whim. Even then, most of these "Bibles" were destroyed, proving yet again, while evil may reign for years, God's law is immortal – even at the hands of the most malignant human in history.

YES, "JEWS" HAVE SOME BANANAS

This could be the least-known fact in Famous Jewish Firsts. So "least-known" that even I wouldn't bet my de-frizzer on it. But hey ... it comes from "The Gray Lady" herself, circa 1900 and the "American Hebrew," 1909. Both report that the glorious yellow banana, was introduced to our shores by a Jew, Solomon J. Marks! His Times obit? [Undated] "Solomon J. Marks, who died suddenly of apoplexy at his home, 1.160 Forty-first Street, Brooklyn, on Thursday, was credited with having shipped the first shipload of bananas ever sent from the West Indies to the United States. Mr. Marks was then one of the largest banana raisers in Jamaica. The commander of the little schooner that brought in the bananas was Capt. L. E. Baker, later President of the United Fruit Company. He came to this country four years ago, and interested himself in real estate in Brooklyn." Ironically, the one other Jew who may have been in on the secret? Woody Allen! His 1971 film Bananas was a nod to the Marx (get it?) Brothers' Cocoanuts, their first actual film – and that title didn't make sense, either! The whole fascinating, unsung mishegoss makes you want to name your next child Chiquita ... (unless your surname's "Cherkinsky").

The glorious yellow banana, was introduced to our shores by a Jew, Solomon J. Marks!

In 1894, a Boston gentleman made a bet with a Yiddishe Mama named Annie Cohen Kopchovsky. The challenge? To be the first female to circumnavigate the world – by bicycle. Ah, but more. The mother of three had to start peddling with not so much as a kopek, earn five thousand dollars above expenses – and make the ride in 15 months! Her reward? Ten grand. Most of us, back then, would call the whole thing meshugge and return to baking challah. Not plucky Annie. The resourceful lady, making the trip solo, survived physical injury, mechanical problems with her bicycle, and picked up endorsements, press attention while "speechifying" all the way to Japan and back. Not only did she complete her trip in ten months, she proved that a woman could wear the "bloomers" in the family (and helped popularize the things). She collected her $10,000 prize and then rejoined her family. Oh, and by the way ... Annie had never ridden a bicycle until a few days prior to the challenge! It was like reality TV before TV: "Survivor: Yiddishe Mama!"

UN on China and Burmese Crises: Israel's Fault
The Power Of Prayer
Va’etchanan 5782: A for Effort
Can You Show Me This "God?"
Comments
MOST POPULAR IN Jewlarious
Our privacy policy
Aish.com Is Looking for Great Writers