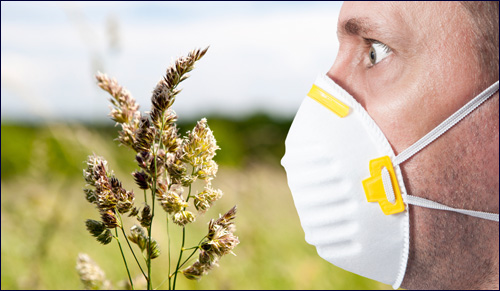 We Jews adore questions. The answers – eh not so much.

There are those rare times you shouldn’t ask because you might accidentally get a rotten answer. So, as in the past, I’m here to help which brings us to today’s topic: Questions NO ONE should ever ask an allergic Jewish person.

That’s not to say only Jews have allergies. Other people also may pass out from say, nuts. But We Jews instead of DNA, have DNAA – a whole separate strand -- for allergies.

Now, why have I chosen this particular subject? Simple. While, like my friends I walked around my whole life shnarfling (my cross between sneezing and leaky sniffling), this week I awoke with eyelids (upper and lower) that were the size of dirigibles. Also there was the question of being blind.

I ran to an ophthalmologist. His background was German. Trying to be “cool” around the Jew he made a joke about why Abraham started the wars in the Middle East. A real-knee-slapper. “I’m dead,” I thought. I could see the local paper. “Marnie Macauley: Writer, counselor, speaker with seven fans passed away today. Cause of death: Fat eyelids. The ACLU is investigating the attending physician – Dr. Otto Ottovordemgentschenfelde who is known for telling rotten ‘Jewish jokes.’”

The next day I resembled the Elephant Woman. Small children ran from me. (And no Benadryl didn’t work, although I started seeing strange things in the dark – like little Dr. Ottovordemgentschenfeldes on the wallpaper.)

I then ran to the E.R. which we all know is itself a death wish. A youngish cute doctor approached me in the waiting room and asked questions. When he got to my age, he announced my DOB to the whole place. Being me, I said: “A little louder. They didn’t hear you in Uruguay.” He stared at me. “I’m from Uruguay,” he said.

Six hours later, I got what I asked for. A massive shot of cortisone. “You’ll also need an epi pen” he said, adding, “Whoa! You were almost in anaphylactic shock. Don’t touch anything anywhere –ever. Wash your hands with, yada, yada.” So I graduated from Jewish shnarfler to eppes, a full grown Epi. I almost passed out. But I did get a free turkey sandwich.

After my brush with death, I’ve become allergically-correct and thought it my duty to alert everyone, Jew and Gentile alike, to never ask the following questions to people who have things swelling, blowing up, or running from their person.

QUESTIONS YOU SHOULD NEVER ASK AN ALLERGIC PERSON

1. “What foolishness! Don’t you know it’s all in your mind so the pharmaceutical companies can make out like bandits?”

Mamalas, this is not a good question to ask people who, after passing a can of blueberries resemble Violet Beauregarde, especially when they’re armed with needles. Trust me. Their nice Jewish kops don’t make them: shnarfle at other people, scratch in strange places unless they’re baseball players or blow up and down. Besides, should you utter this question, you’ll get a lecture, 15 doctors’ notes, and their family history of “bad” noses that started with Sarah. I suggest you simply say: “Rhoda, the shnarfling, the scratching, the blowing up and down really makes you –a stand-out in a crowd.”

2. “Darling, Is it really necessary to call over the chef and ask exactly who touched the food and with what in a five-star restaurant?”

What? An allergic Yiddishe kop should trust some Frenchman who gives out gold stars to adults? How do you know the history of that veggie burger or what it’s been through? If someone dripped into it? Blew on it? Sneezed around it? With our mazel, the server, Mo, had Yoo Hoo dribbling from him which he sopped up with a towel he brought when fishing that morning to hold his bait and walnut snack. He then turned it into a bandana, and, shvitzing on it, MADE THAT VEGGIE BURGER. A street vender in downtown Calcutta is safer. Trust me. You’ll hear: “Madame, as the manager I can assure you that nothing touches our meat. And … it’s all local. Now, just sign the waiver. Here. And here. And just initial … pages 3-34.” Better a person be a little annoying than you spending seven hours in the ER because her veggie burger contained “local” veggies – and Mo-shvitz.

3. “Tee hee. And Judy, you didn’t even know I slipped a peanut in your shake five minutes ago, now will you admit you’re not allergic?”

Judy can’t answer because her mouth is frozen in a horrific maw as her throat is turning into a blowfish. Sweethearts, surprises are nice if say, they include an intro to the single head of Mt. Sinai, tickets to Matisyahu, an old tape of Fanny Brice, a Krusty the Clown memorial pin. These are decent “surprises.” Killing a person “for-her-own-good” is much like the episode of Seinfeld, when someone slipped lobster in Jerry’s girlfriend’s omelet. Even here, her soul might be affected, but not her breathing apparatus. But more, causing death-by-Goober of a 33 year-old, trust me, will deeply affect your relationship with mitzvahs.

4. “I have absolutely no idea what’s in this water. It’s water! When has water killed a person?”

He knows, mamala! Trust me, he has a list that includes seven people who took a shower and exploded. Three were in Afghanistan where their brightest terrorists were doing secret “testing” of the power of human dribble. Another lived in a cave near the Dead Sea. A fifth was an extra in “Singing in the Rain,” and the rest, a real tragedy … when their mamas’ poo pooed on them to ward off the evil eye. Much better to say: “Listen Sheldon darling … let’s invest in a raincoat.” Even if you live in Death Valley.

5. Mamala, how about if Mommy lists your allergies on your yarmulke. Won’t the other kids think it’s adorable?

Your son shnarfles, has spontaneous nose bleeds and more hives than a beekeeper. He’s puffy. He asks strange children to scratch him. He sits out in gym, science, home economics, lunch, the playground, and school trips to bread factories. He carries more pills than Walgreen’s and wears five different Medical ID bracelets. Trust me darlings. If he’s in public school, the one thing he doesn’t need – is advertising. They notice him! On the other hand, if he’s in Jewish Day school, brilliant! From your idea you can start a new home-based business: KippAlert.

You Think Your Job Is Bad?
The Softball Player
How This 6 Generation Bread Baker Brought Back Israel’s Ancient Grains
Olivia Newton John’s Grandfather was a Nobel-Prize Winning Jewish Physicist
Comments
MOST POPULAR IN Jewlarious
Our privacy policy
Aish.com Is Looking for Great Writers