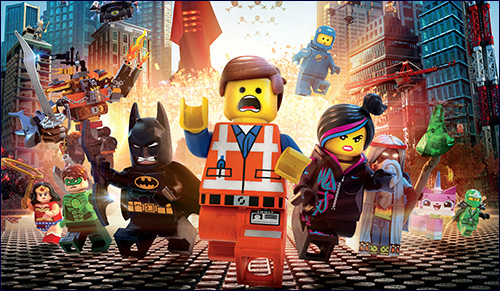 Do you want an argument for the existence of God? Watch The Lego Movie.

If you watch The Lego Movie, you might realize there’s a God. And not just because what was initially an ill-conceived 90-minute ad for a toy everyone already knows about turned out to be awesome anyway.

SPOILER ALERT: There is a God. He’s the man upstairs.

WARNING: Do not read this article unless you’ve already seen The Lego Movie, or have no intention of doing so because you hate fun. The article is very spoiler-heavy.

And yes, I’m warning you about spoilers. In a movie about Lego. What are Lego spoilers, anyway? Is that like skipping to the last page in one of their instruction manuals?

Of course it is. When I was growing up, Lego came in boxes of random pieces. I made a lot of multi-colored houses back then. Whereas nowadays, you can buy a package of pieces that will help you make an incredibly detailed pirate ship, but are not very well suited to building anything else. Just the pirate ship. It’s like doing a puzzle, or buying something from IKEA. You buy pieces for a dresser, and you can’t use your imagination to build, say, a sofa. These pieces build a dresser.

So you build your pirate ship, and then what? Are you going to take it apart and put it back together again? How? The instructions were the first thing you lost! Maybe you should just glue it together, like a puzzle that you hang on your wall. No?

This is a question posed in the movie. The movie centers around Emmet, a Lego mini-figure, who, like Lego, is always getting stepped on. No one knows he exists, and his best friend, who he drinks coffee with every morning, is a potted plant. And it’s not even a real plant. It’s made out of Lego, which, to be fair, is exactly what he’s made of. Everything in this universe is made of Lego bricks, or, as the Lego people call them, bricks. The water is blue Lego bricks, the fires are orange, the smoke is grey. I don’t know what’s in the coffee mugs.

But one day, Emmet comes across a mysterious rectangular prism that’s not of this world, meaning it’s not made of Lego. And it gets stuck to his back.

This attracts the attention of the president, Lord Business (played by Will Ferrel), who kidnaps Emmet. Lord Business is into collecting strange artifacts, such as the Cloak of Bandai-eed, the Wand of Q-Teep, the Polish Remover of Na-eel, and various other gross things one might accidentally find mixed into a box of Lego. Even his cape is a clip-on tie. But his prized artifact is something he calls “The KRAGL” (actually a bottle of Krazy Glue with some letters rubbed off), and he plans to use it to glue the universe together so that no one can move at all, and he can have perfect order forever.

Emmet is rescued by a girl named Wyldstyle, who claims that, having found the “piece of resistance”, Emmet is the long-prophesied “Special” who will save the universe. Emmet has no idea what any of that means, but if it means that a girl wants to talk to him about it, then that’s okay with him.

Wyldstyle takes him to the various realms and introduces him to a team of “master-builders”, including, but not limited to: Lego Batman, Lego Morgan Freeman, Gandalf, Dumbledore, 1980-something Space Guy, and a robot pirate with laser-shark arms. The master-builders can create anything they can imagine in a matter of seconds with no instruction manuals.

(Meanwhile, I can’t even get two flat pieces apart without using my teeth.)

Together, they need to get Emmet back to Business’s tower and put the prism – actually the cover to the Krazy Glue – back on the KRAGL. Because once you put the cover on an open Krazy Glue, it’s never coming off again.

Do they have a plan? Not really. They’ll wing it.

“That was a bat-pun,” Batman says.

Yeah, I know. This all sounds like the kind of plot an 8-year-old would come up with. Or someone who’s been sniffing the glue.

Eventually, they get into the tower, but Business captures everyone, and to save the day, Emmet hurls himself out the window and into the deep abyss below. And when he gets to the bottom, he finds himself on… a carpet.

And then he looks up and realizes that his entire universe – everything he knew – is all located on a table in someone’s basement. And all these artifacts everyone keeps finding are really items from this bigger world that they don’t even realize exists, where this creator that they don’t even realize exists – apparently a young boy – is in fact acting out the story that they’re experiencing – the kind of story an 8-year-old would come up with.

But that’s not all. At this point, the kid’s father – the one some Lego characters think of as “the man upstairs” – comes down in his business suit and reprimands him for playing with the Legos. It turns out they’re mostly the father’s Legos.

The father gets fed up and says he’s just going to glue everything down the way he wants it. And it’s up to the kid to get Emmet back to his world to, um, turn the tables on Lord Business, and also to actually convince his father that the point of the Legos is creativity and imagination.

Oh, and the father is played by Will Ferrel.

SPOILER ALERT: There is a God. He’s the man upstairs.

The evidence for God’s existence is all around.

Some people think God is made up. They think there’s no higher power, because they’ve never seen it. Because in that limited window of time when they’ve been on this earth, God never came down to personally show them his hand. Well, except for the miracles he actually does perform every day, but those don’t count, because he does them every day. They’re just life. So okay, how often would you say God has a responsibility to come down and show you things?

I’d argue that there’s evidence all around. There’s band-aids and krazy glue and neckties, and if you look closely at the spaceships, you can see strings. How closely do you look? Is it His responsibility to show you, or is it your responsibility to look?

God’s not going to hang out on the board with you. He created the board. Why on earth would he live here? If everything in our world – water, fire, smoke – is made of Lego, then the one who created the Lego wouldn’t exist here. He’s not made of Lego.

Our Rabbis say that God is called “Hamakom – the place” because God does not live in our world, our world lives in God. We all exist on a table in his basement.

Saying God doesn’t exist is the easy way out. It’s easier to believe that there’s no one out there demanding anything of us. But the job of a Jew is to see the evidence. That’s what makes us Special.

God is in our everyday lives. He’s not just the one who performs the big miracles, he’s the one who made the building blocks with which we continue to build, and the one who moves things around.

When you realize this, a lot of the randomness of our story makes sense.

There is a saying that fiction is easier to write than nonfiction, because in nonfiction, not everything has to add up. Coincidences happen.

But it turns out they don’t. In real life things make sense too; we’re just too small to always know how. Things make sense when you step off the table and see what’s really happening. But there’s no way we can see that from here. We’re Lego pieces.

Whoa. Turns out the abyss was pretty deep.

We live in a world of plastic, where God is hidden. We believe that when we get to the afterlife, the real world, the true world, the Olam Ha’Emmet – yes, Emmet – we get to look back and see the big picture. It’s only when Emmet steps outside the box that he can finally understand what’s going on.

(And no, we don’t actually have to die to find out if there’s a God. You know who else thinks outside the box? The master-builders.)

Life is like a box of Legos. Want to see God? Think outside the box.

Adele's New Song Gives Us Access to Her Heart
The Promise Of The Land
Which Chat Are You On?: Parshas Behar/Lag Ba’Omer
Do You Like Slow-Cooked Food? Thank the Jews
Comments
MOST POPULAR IN Art Smarts
Our privacy policy