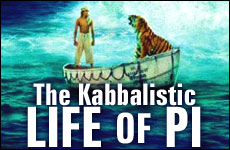 The surprising Jewish connection hidden inside the bestselling book and new film.

The upcoming 3D blockbuster, Life of Pi, directed by Ang Lee and based on the bestselling book by Yann Martel, tells the story of a boy adrift on a lifeboat in the Pacific, accompanied by a 400-pound Bengal tiger.

That will make for some great visuals, but the question is whether Hollywood can capture the subtlety of a novel that deals with deeper questions of religious morality and the existence of God. In other words, will the book's content drown in a computer-simulated ocean storm, or will it float?

For years, friends and relatives tried to get me to read Life of Pi, but to no avail. The storyline of an Indian boy, Piscine Patel, who practices Christianity and Islam plus his native Hinduism, always seemed to irritate me. Perhaps other Jews out there also picked up on my aversion: In Pi's spiritual quest, why is Judaism missing? True, Jews represent a less than one percent of the world's population (with an even smaller presence in the novel's Indian homeland), but as the source of both Islam and Christianity, shouldn’t Judaism be mentioned?

I finally put my prejudice aside, read Life of Pi from cover-to-cover - and loved every minute. To my surprise, I didn't have to look far for Jewish references. Life of Pi is encoded with esoteric Kabbalistic wisdom sewn into its very fibers. It’s as if Martel wished to present the reader with an introduction to Jewish mysticism!

On the very first page of the book, an adult Pi reveals that his fourth-year thesis for religious studies at the University of Toronto concerned the "cosmogony theory of Isaac Luria, the great sixteenth-century Kabbalist from Safed." Cosmogony (yes, l had to look it up on Wikipedia) "is any theory concerning the coming into existence or origin of the universe, or about how reality came to be." Rabbi Luria is better known as the Arizal, the holy lion, the father of modern Kabbalistic thought. We shall soon explore the cosmogony of the Arizal and see how it forms a basis for the entire book.

When challenged to choose, Pi quotes Gandhi: "All religions are true."

An author's note at the beginning of the novel presents his goal: to tell "a story that will make you believe in God." The reader is introduced to the young Hindu-born Piscine Patel, nicknamed Pi, and his unusual religious practices. Stemming from his intense desire to "love God," Pi engages in a Siddhartha-esque spiritual journey that leads him to convert to Christianity and Islam, despite the fact that the three religions are seemingly mutually exclusive. When challenged to choose one, Pi passionately blurts out a quote from Gandhi: "All religions are true."

Pi is the son of a zookeeper and as we get to know his family, we are also introduced to the animals of the family zoo. In the process we learn a lot about zoology, together with many life lessons that are gleaned from the habits of the animals.

Pi and his family decide to immigrate to Canada in search of a better life. They embark upon a Japanese cargo ship called the Tsimtsum en route for Canada, together with several animal members of their former zoo. Without warning, the ship suddenly sinks somewhere in the middle of the Pacific Ocean, leaving Pi and an odd assortment of animals as the sole survivors. Now the story begins of Pi's survival on the lifeboat, together with the last remaining animal, a ferocious adult male Bengal tiger. The story of ingenuity, adventure, courage, faith – and one miracle after another –precipitate Pi's eventual landing on the coast of Mexico 227 days later.

The Japanese delegates prefer a more "rational" account of Pi's survival at sea. "We don't want any invention," they say. "We want the 'straight facts'."

"Isn't just looking upon this world already something of an invention?" Pi responds. "The world isn't just the way it is. It is how we understand it, no?"

The miraculous one is indeed the "better story."

At last, Pi presents them with a more "rational" explanation of his survival which the delegates find much more satisfactory. He then asks which story they prefer: the miraculous one or the dry one. They admit that the miraculous one is indeed the "better story."

"And so it goes with God," Pi replies.

Thus the book concludes with the message that belief in God is indeed the "better story" - a life infused with meaning, purpose and design, far surpassing one based on meaninglessness, chaos and coincidence.

Now let's return to the Kabbalistic cosmogony of Arizal. Theologians throughout time have tried to understand how God, who is infinite, could create a finite world. According to Kabbalistic thought the question is even stronger. Judaism, as the first Monotheistic religion, not only espouses belief in one God as opposed to many, but also that “God is One” and there is nothing besides Him.

If that's the case, how then do we exist? Or more accurately, how does anything exist?

The Arizal answers by explaining that in order for God to create a finite world, He had to constrict His infinite essence, creating a seeming vacuum wherein something separate from Him could exist.

The world was born in this vacuum. This set the stage where God, the Master Director, is completely hidden. Were He to be revealed, we would cease to exist, melting back into the infinite Oneness of His essence, like a small candle before the sun.

In order to preserve our free will (and our independent existence, for that matter), God must hide Himself. The Hebrew word for world, olam, comes from the same root as the word helem, hidden.

In this hidden world, we have free will to either embrace the illusion of a Godless "reality," or to find God and thus connect ourselves to the ultimate "Reality." It is our choice whether to see God, or not.

The Hebrew word for God's constriction is Tsimtsum – the very name of Pi's ship! This is clearly no coincidence. The sinking of the Tsimtsum throws Pi's life into chaos, cruelly wrenching away his loved ones and his childhood. He is left with a choice: to view the world as a random, cruel place of suffering, or to see the "better story," a world of meaning, love and miracles. Similarly, God's tsimtsum created a world where He is hidden, and things appear completely random. The choice is ours: see only the pain and suffering of this world, or discover the deeper meaning of it all.

Ironically, what I initially perceived to be a book that neglected Judaism, turns out to resemble a course in Jewish mysticism 101. I wonder how many readers Martel expected would be well-versed enough in Kabbalah to catch his hidden message.

And yet, Life of Pi falls far short of a “Jewish message.” According to Pi, God is the "better story." Belief in God makes life richer, easier and more meaningful – yet has no "factual difference." In other words, we have a choice how we choose to view reality, but neither picture is any more accurate than the other. Furthermore, Pi admits that God is not the "rational" story.

Make an informed, rational decision about the existence of God.

According to Judaism, however, belief in God is very much rational. A person has the obligation to investigate the existence of God to the best of his or her intellectual capacity, and then make an informed, rational decision. If God is True with a capital-T, then it is not only a nice story, it is capital-R Reality.

Now we can understand why, in Pi’s view, there is no contradiction in being a member of three different faiths. If God is just another subjective decision to enhance life, then whatever path works for you is valid. If, on the other hand, God is True, then we have an obligation to find out what path best conveys His purpose for mankind.

Judaism does not claim to have the exclusive path to God. On the contrary, in stark contrast to Islam and Christianity, we don’t believe that all of mankind is obligated to convert to Judaism. Rather, each nation is free to serve God in their own way, provided that they adhere to certain basic universal principles of morality. If God is infinite then there are indeed many ways to connect to Him.

Islam, Christianity, and Hinduism, however, cannot all be "absolute truth." They may all express common aspects of God, but not in the ways that they contradict each other. For example, although a Muslim believes that Jesus was a prophet, they believe that calling him a god is blasphemy. Similarly, both Christians and Muslims believe that the many gods of Hinduism are idolatry. They cannot all be right.

Pi might believe that God is a nice idea, another choice in the subjective reality of modernity. Jews believe that He is the One and Only Reality.