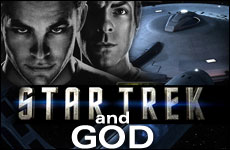 This past weekend sci-fi fans headed to the movies to enjoy the latest incarnation of "Star Trek." The new movie version of the classic TV show that spawned ten feature films and hundreds of episodes of spin-off programs didn't disappoint those who wanted action, adventure and the appeal exhibited by the young actors who have taken over the iconic roles of Captain James T. Kirk and Commander Spock.

"Star Trek" is an all-encompassing vision of the future that has given generations of its fans an alternative universe to ponder. The original series and its generally well-made successors have reflected the culture and controversies of our own time rather than being an educated guess about what will be bothering humanity in the 24th century. In that sense the original Trek did a fine job exploring the tough issues of the 60's, such as racism and the balance of terror between competing superpowers.

Faith in God, or indeed any sort of religious belief, was largely confined to the less advanced populations of planets

In the original "Trek" as well as "The Next Generation," "Deep Space Nine," "Voyager" and "Enterprise," faith in God, or indeed any sort of religious belief, was largely confined to the less advanced populations of planets that were not likely to be joining the United Federation of Planets. The humans of the future were, by and large, clearly atheist even if they traveled among a great many races that held a variety of peculiar beliefs. The only thing in which Star Fleet officers truly believe is the "Prime Directive." That is a law that requires space travelers not to interfere in other cultures though, as fans of the show know, it is a rule that is often observed in the breach by officers like Kirk who are often as judgmental about other civilizations as the explorers of an earlier age.

For example, when Captain Picard, the "Enterprise's" leader in "The Next Generation" comes into contact with the inhabitants of a primitive planet that was being observed by Federation sociologists, they naturally assume he is a god because of the amazing tricks he can perform with space age technology. The generally likeable Picard regards these natives with the sort of condescension reserved for slow children. The frame of reference of the "Enterprise" crew is not that the residents of this planet had wrongly mistaken the captain for the true Master of the Universe but that they are children for believing in any sort of deity.

It should be noted that one famous exception to this rule came in a throwaway line concluding an episode during the original "Trek's" second season. At the end of a show in which the intrepid Kirk and Spock had interacted with a planet where something resembling the Roman Empire had endured until the equivalent of the 20th century replete with televised gladiator fights, we were informed that the slaves fighting for freedom were not worshippers of the Sun, but the son of God. This was the only evidence that I can recall that the "Enterprise" crew was even aware of the tenets of any faith that its audience might actually observe.

One religious breakthrough took place thirty years later on the "Star Trek: Voyager" show which was first shown in the mid-1990s. In that show, the "Voyager's" first officer was a Native American who still practiced the faith of his ancestors making him the first person from Earth to actively profess a religion.

But specifically Jewish content remains absent from "Trek." Though both of its two main original stars ― William Shatner and Leonard Nimoy ― are members of the tribe, there has yet to be any character in the show who wears a kippah or needs to be absent from his station on the bridge because of Yom Kippur. Much was and still continues to be made of Nimoy's "invention" of the Vulcan hand salute ("live long and prosper") that he derived from the priestly benediction extended to the congregation by Cohanim. Though viewers have experienced every sort of alien ritual over the years on the show, the observance of Judaism, or even Christianity, is something that appears to be extinct in a "Star Trek" universe where appreciation of other relics of our time such as baseball still exist.

In no small measure this disdain for faith stems from the mindset of its creators who envisioned a future that was based on belief in humanity's steady and inexorable advance from primitive beliefs to rational scientific thought. Doubts about faith in technology have crept into the show over time. The computers and devices that would define the "Trek" world could as easily be used for evil as for good. But it was for the most part a world in which the Supreme Being as understood by the Judeo-Christian worldview (as opposed to the understanding of the fictional Klingons, Romulans, Cardassianns and Bajorans) is absent. Gene Roddenberry (not Jewish despite the persistent rumors to that effect) saw the future in a basically optimistic way and for him that implied the absence of traditional Western religion.

As such, for all of the enjoyment that "Trek" has given its fans (and I will stipulate that I have been one from the show's earliest days though I have never attended a "convention" or sported a "Star Fleet Academy" bumper sticker on my car.), it has always punted on some of the toughest questions that intelligent beings on this planet or any other are bound to ask about the universe we inhabit. The "Trek" world is one that is without any true God but a belief in humanity and science, a faith that, as we learned to our collective sorrow in the 20th century, is a poor guide for any civilization, no matter how superficially advanced.

An interesting contrast to the atheism of "Trek" is the way religious faith was depicted on the recently concluded "Battlestar Gallactica" revival. The new version of the show was a brilliant and dark exploration of the story told from the perspective of the post 9/11 world. Though its ending left most of its fans unsatisfied, in its pilot and first seasons the show's chilling depiction of the genocide of humanity by a race of robots called Cylons made one ponder what it would actually be like to survive such an event or how to deal best with terror and a war against an enemy bent on annihilation.

The most chilling aspect of "Gallactica" was its treatment of religion.

But as unsettling as all of that might be, the most chilling aspect of "Gallactica" was its treatment of religion. The humans on "Gallactica" seem to be the product of an advanced civilization but they are also polytheists who always referred to deity in the plural, even when cursing. Their "gods" were those of the ancient Greek myths. But their foes, the implacable Cylons, rejected the pagan religion of the humans and instead worshipped a single God whom they believed was the only true Supreme Being.

How can we account for this curious paradox? Were these monotheistic mass murdering robots a reflection of the fundamentalist Islam that brought down the 9/11 cataclysm on the United States? Perhaps. But, as was the case with many other Americans who found the notion of a clash of civilizations between Islamists and the West too painful to contemplate, the show eventually changed course and humanized the Cylons to the point that they were just as sympathetic, if not more so, than the show's humans.

As for faith, it wasn't entirely clear what the survivors of "Gallactica's" cataclysmic war between people and machines believed in by the time the show ended but it looked as if something akin to the monotheism of the Cylons seemed to prevail over the pagan myths that drove the humans.

If space operas, like the Westerns that came before them, are the ultimate morality plays, then maybe it's not too much to ask that they take faith seriously. Unlike "Trek's" breezy and optimistic atheism, "Gallactica's" dark and confusing attempt to think seriously about faith marked an advance for the genre. A world without God, even a fantasy world, is one that will inevitably be as much at a loss for ultimate answers as the one we currently inhabit.

Superman vs. the Nazis
The Blue Beyond
Great Place to Live
Is Eating Supposed To Be Spiritual?
Comments
MOST POPULAR IN Jewlarious
Our privacy policy