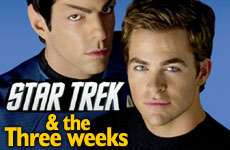 Losing our "mother ship," we are all vulnerable.

Two weeks ago I realized that I was a grownup. Even after marriage and two kids I still would pass by high schools and not believe that I was considerably older than the inhabitants. Since I have been told that I look somewhat younger than my years, I could still keep up the façade that I was in my early twenties, and was happy to do so. But after the events two weeks ago, I realized that my inner core was much older than my outer shell appeared.

It was my husband's birthday. My parents had generously agreed to watch our kids while we had a much needed night out. Usually my husband and I went to dinner on our occasional dates but for his birthday I wanted to do something unique. I knew that he was the brother of a Trekkie and would love to see the new Star Trek film out in theaters. I figured that the movie, based on a relatively innocent television storyline, wouldn't have too much objectionable content.

We got to the theater late and were surrounded by young people in their teens and early twenties. It looked like a lighthearted scene and, with my body bone tired due to a sleepless baby and my mind mottled with the ever present worries about our children, already I started to feel out of place. I smiled at my husband and tried to relax.

I stared at the screen in horror, saddened and shaken to the core.

We settled into our seats just as Star Trek began. It starts out innocently with a ship cruising through space, policing the galaxy for other unwanted vessels. And then, within the span of five minutes, a war breaks out between the protagonist ship and an enemy vessel, tens of people are killed, a baby is born and his father simultaneously dies a brutal death as he performs a suicide mission. I stared at the screen in horror, saddened and shaken to the core.

The rest of the film passed by in a blur. Some parts were entertaining but every time another person was killed, which occurred often, I felt like crying.

As we exited the theater my husband and I schmoozed about the movie. We both felt a little dizzy from the close quarters, loud noise, and bright screen but were otherwise in good spirits. But on the ride home and for hours afterwards I felt a nagging unease and found my mind wandering back to the violent scenes in the film.

After I analyzed the demise of the poor young father for the nth time, I tried to pinpoint what was really bothering me. Having been a film major in college (I did my thesis on war films), I should have been used to people dying in movies. And then I realized what was troubling me, what separated me from the blissful ignorance of youth -- I no longer felt invincible.

Recently I was reading an article about where the most scholarly high-school graduates in our area were planning on attending college. It highlighted a young man who was particularly gifted in art, dubbing him the next Andy Warhol. "A true prodigy," the article gushed. And then I thought about my own career endeavors as a youth, wanting to become the youngest writer to have her screenplay produced in Hollywood, dreaming of being the next Doogie Howser in the veterinary world, and I thought to myself, "I will never be a prodigy." The cute childhood statement "When I grow up" had suddenly disappeared and in its place was real, grownup, life. I had finally begun to internalize the transitory nature of human existence.

With each death I faced on screen, I thought about my own mortality.

Life had become a precious commodity, one which changes in a moment. So while the director of the film threw people into blazing fires and off spaceships with careless abandon, I was struck by each blow. It was such a tragedy, I thought, a loss of human potential. No one would ever be born exactly like them. And with each death I faced on screen, I thought about my own mortality. Was I maximizing the time I have on earth?

We are entering a time in the Jewish calendar when we are forced to reckon with the ephemeral nature of life -- the three weeks and the Tisha B'Av when the Temple was destroyed. The presence of the Beit Hamikdash, the resting place of the Shechinah, or God's presence, brought countless blessings on the Jewish people and an added source of protection -- it was our "mother ship." With its destruction, the Jewish people became all the more vulnerable to spiritual and physical attack. During these three weeks, numerous tragedies befell the Jews causing countless deaths -- invaluable souls were extinguished from this world.

I keep on reminding myself that the people killed in Star Trek are just actors. Their dramatic demises would have been followed by a "cut!" and hours scrubbing off the sci-fi makeup. But in our world, our own existence is usually far less dramatic. It is up to us, with the help of our Creator, to create the beauty, the excitement -- to strive to reach our potential with our limited time. Only then can we, in the words of first officer Spock, truly "Live long and prosper."

Hilary Spirer Leeder is a writer and a guidance counselor at the Torah School in Silver Spring, Maryland. Her articles have appeared in a number of publications. An essay was featured in the book Everyone’s Got a Story, published by Judaica Press. Mrs. Leeder obtained an MSW degree from NYU and a BA degree in film from Columbia University. She lives with her husband and children in Silver Spring, Maryland.

Warsaw Ghetto Furniture
Vayelech 5783: Regret and Repent
Rabbi Sacks: Focus On the Important, Not the Urgent
Put Your Foot Down: Are Human Feet Poorly Designed?
Comments
MOST POPULAR IN Israel
Our privacy policy
Aish.com Is Looking for Great Writers