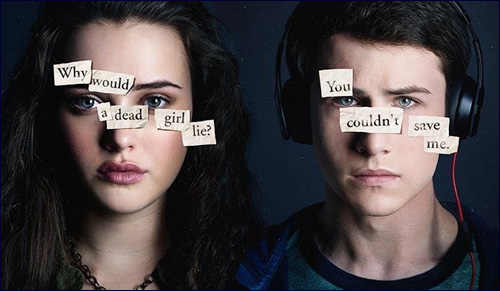 The controversial series is generating healthy discussion regarding pivotal issues, but many people should not watch it, under any circumstances.

I am not a typical Netflix viewer; I'm just not the movie type. Besides, as a father of 8, a practicing Jew, and a super-busy psychologist, I simply don’t have the time. Yet, when asked my professional opinion amidst the recent controversy surrounding the popular series 13 Reasons Why, I signed up for a 30-day free trial subscription and binge-watched most of the series.

Based on Jay Asher’s 2007 novel, the series focuses on a high school student, Hannah Baker, who has recently died by suicide. Prior to her death, Hannah recorded a series of tapes detailing her path toward suicide and the individuals she holds responsible. The movie is both realistic and well-done, containing a captivating plot and compelling characters.

As a child and adolescent psychologist, I have become quite familiar with the somber realities of our age and have heard enough tales of bullying, sexual assault, and depression. Nevertheless, viewing the realistic and graphic portrayals were eye-opening, reminiscent of the Talmudic observation “one cannot compare hearing to seeing.” I also appreciated the series' apparent emphasis on highlighting the importance of kindness and inclusion and the tragic results of their absence. I hope that this series will be a springboard to generate healthy conversation and discussion regarding these relevant themes.

Its positive contributions notwithstanding, this series has generated ample controversy. Mental health professionals have expressed concern regarding showing scenes of sexual assaults in multiple flashbacks, as well as the graphic nature of the suicide scene which possibly glamorizes her death. This can potentially trigger people, especially teenagers, who have had similar experiences. Critics are also concerned of a subtle message that suicide is a way to become popular, as well as a way to get revenge. This is related to the oft-expressed concern regarding suicide contagion, the well-documented phenomenon that significant attention to suicide is associated with increases in suicide rates.

Children under 16, the emotionally fragile, and those who have experienced sexual assault or self-harm should not watch this.

In my opinion, it is best for parents to navigate a middle of the road reasonable approach. One needs to be aware of the pitfalls and simultaneously recognize the opportunity to address troubling and prevalent challenges. As such, I would recommend that the following not watch this series under any circumstances: children under 16, the emotionally fragile, and those who have experienced sexual assault or self-harm. This series will simply be too triggering for them. Similarly those of a more conservative or religious bent who seek to shield their children (and themselves) from profanity, intense sexuality, and aggression should pass this opportunity.

Mature and more liberal teenagers, on the other hand, may be able to tolerate and even grow from it, especially if viewed together with a responsible adult prepared to discuss tough issues.

These tough discussions can involve a complex interplay of themes related to morality, Judaism, and mental health. While the series emphasizes the great toll that suicide takes on loved ones, Judaism’s position is even more fundamental: it is about the sanctity of human life. While mental illness is not a justification to take one’s life, if this does occur, we assume that the person was not in control of his actions and leave the rest to God.

It is a parent's responsibility to develop an awareness of mental health challenges as well as an approach to handling them. If you are parenting a teenager, you are likely aware of the emotional ups and downs that are built in to this stage of development. However, it can be difficult to determine when it is the occasional sadness and when he or she is suffering from something more serious that necessitates immediate treatment. Two factors that may indicate greater severity include the suddenness and intensity of change.

In addition, if you find that the symptoms described below last for longer than two weeks, and if they disrupt your child’s day-to-day functioning, it may indicate something more serious. These symptoms include feeling sad, hopeless, or irritable, losing interest in activities that they used to enjoy, change in sleeping and eating habits, and trouble thinking or paying attention, even to things that they previously enjoyed. In addition to the above, those clinically depressed may think or talk about death and some have thoughts about hurting or killing themselves.

It is our parental responsibility to not ignore warning signs.

Even when an astute parent notices that a child is experiencing something more serious, the child will often not admit to it. Many depressed teenagers may not be able to express their feelings or may be embarrassed to do so. In these scenarios, it is crucial to develop a relationship with the child, which will encourage him or her to talk and will facilitate them following up on making good of the help. It is important to listen attentively when they talk and even set aside special daily to do something together and chat.

Most importantly, it is our parental responsibility to not ignore warning signs. These include irrational behavior, suicide threats (even indirect), obsession with death, writings that reference death, or overwhelming sense of guilt or rejection. If you notice any of the above, don’t try to manage them on your own. Rather, get professional help immediately. There are many evidence-based treatment options that can help. These included psychotherapy, such as cognitive-behavioral therapy (CBT), dialectical behavior therapy (DBT), and interpersonal psychotherapy. In addition, medication can be very helpful for those experiencing depression.

Dr. Chaim Neuhoff is a clinical Psychologist based in Brooklyn, New York who specializes in working with the social and emotional challenges of children and adolescents. He is the Director of the New York based Nachas Consulting and serves as Psychologist for Gesher Yehuda, a New York based private school.

The Adele Sensation
It Takes A Lot Of Faith To Be An Atheist
How Instagram Brought Back This Nostalgic Soup
What Makes Eli Run?
Comments
MOST POPULAR IN Current Issues
Our privacy policy