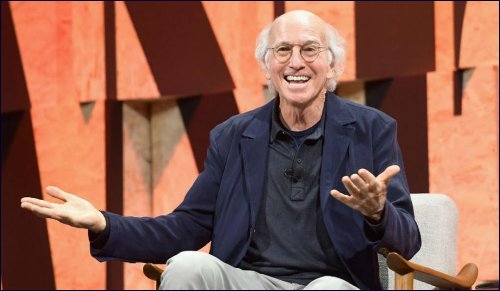 When does humor cross the line from clever and incisive to inappropriate and offensive?

Some fans of Larry David may have curbed their enthusiasm for the comic actor, writer and producer after his unsettling Holocaust-themed jokes on Saturday Night Live last week.

In the opening monologue, David seized on the ongoing revelations about sexual exploitation of women, primarily in the entertainment industry. David wished that so many of the accused were not Jewish and said he vastly preferred hearing about Jews who make the news because of wonderful achievements, like Albert Einstein. While painfully true, it was a cringeworthy observation for people who feel a sense of communal shame over the Harvey Weinsteins of the world. “I consistently strive to be a good Jewish representative,” David said, which seemed startlingly at odds with having reminded a nationwide audience of a situation that cannot help but disgrace all Jews.

Uncomfortable as that moment was for many Jewish listeners, the humor was well within bounds of acceptable humor fodder. Then David segued into jokes acknowledging his own weakness for women, wondering how he might have tried to entice women had he been in a Nazi concentration camp. The problem, he said, is that “There are no good opening lines in a concentration camp.” Pausing for effect, he suggested, “How’s it going?” Audience laughter notably dwindled and David must have registered the uncomfortable looks on their faces, because he then asked, “What? What’d I say? Is it me or is it the whole thing?”

The jokes delivered a shock, and it was also a moment where life imitates art. In his long-running show on HBO, Curb Your Enthusiasm, Larry David plays himself as a semi-retired comic writer, but one whose unfiltered comments consistently get him into trouble. Whether shrugging off the news that his barber’s wife had a miscarriage by saying, “She already had nine kids,” to thanking only the husband and his wife for treating him for dinner because “he’s the one who goes out and earns the money,” David’s lack of tact and consideration lands him in the soup in every episode. For fans of the often-raunchy program, the Holocaust routine might have just seemed darkly funny. For people who cannot fathom the idea of trivializing the experiences of Holocaust victims with jokes, it was appalling.

When does humor cross the line from the clever, the ironic, and the incisive to the inappropriate and offensive? This is highly subjective and always will be. Comedy is borne of “tragedy plus time,” as the famous saying goes. But how much time? Are some things so awful that no amount of time can ever make them funny?

This is one question explored in the 2016 documentary The Last Laugh, which features Mel Brooks, Carl Reiner, Rob Reiner, several other comedians, as well as Holocaust survivors, who all talk about the role of comedy in the context of the Nazi atrocities. (Fair warning: the documentary includes explicit language.)

Mel Brooks smashed taboos about Holocaust humor with his 1967 film The Producers, about a down-and-out producer (Zero Mostel) who intentionally stages the worst, most tasteless show possible, one that celebrates the German Fuhrer, called Springtime for Hitler. Mostel and his sidekick (Gene Wilder) had worked out a scheme they assumed would make them more money with a flop than with a hit. What would flop faster than a pro-Nazi show? Comedy ensues when, to their shock, the audience decides the play is a parody and it becomes a hit.

Making the movie only 20 years after the end of WWII, Brooks, who won an Academy Award for his directorial debut in this film, fielded a barrage of “How could you?” calls and letters over the movie. In the documentary Brooks defended the work. “Anything that deflated the Germans, I did,” he noted. In his 1978 mockumentary, Peeping Times, Brooks portrayed Hitler at home, horrified when Eva Braun killed a bug. “How could you,” he asked. “It’s a living thing!”

Brooks’ works were arguably also tasteless, and certainly daring, but they maintained a rule of comedy in that the satire was directed at the powerful and the evil. Larry David’s jokes failed in large measure because he flipped the focus: the jokes weren’t at the expense of German leadership, but at the expense of the victims themselves.

Scorning and mocking the Nazis – and Hitler himself – became popular even during the war through Charlie Chaplin’s classic 1940 film The Great Dictator. The Marx Brothers spoofed the Germans in A Night at Casablanca (1948), and many WWII-era comedies likewise lampooned the enemy. In the 1960s, the television show Hogan’s Heroes featured American POWs secretly working for the Allies and showed their German captors as buffoonish and inept.

Holocaust Jokes: I Can’t Go There

Larry David has worked in edgy Holocaust themes before. During his show’s fourth season, he did an episode called “Survivor,” in which the character of David’s father was an actual Holocaust survivor who meets a young “survivor” from the TV show of the same name. The two argue about who had endured the worst indignities. In “The Last Laugh,” there is a scene where a real Holocaust survivor watches this episode and says to her daughter, “This isn’t funny.”

Comedians who traffic in Holocaust jokes (the foul-mouthed Sarah Silverman has done so inexcusably numerous times) demonstrate a sickening insensitivity to Jewish tragedy. This insensitivity is a natural outgrowth of distance in both time and in emotional connection to our history. It has spread well beyond the world of entertainment. In the apparel industry, five- and six-pointed yellow stars have appeared on shirts – some of them striped – were released by Gymboree, Miu Miu and Urban Outfitters. In 2014, Zara released a similar garment that was quickly dubbed a Holocaust shirt, showing they hadn’t learned much since 2007 when they issued a floral handbag sporting green swastikas. Silver rings with swastikas (Sears), Nazi skull logo tees (Walmart) and Xyklon-branded cross-trainers (Umbro) all demonstrate this abysmal ignorance.

I hope that Larry David reconsiders making more Holocaust jokes. To be that good representative of a Jew that he spoke about, he needs to honor and respect the pain we are still capable of feeling about the genocide of one-third of our people. As we move further and further away in time from the shattering trauma of the Holocaust, we need to redouble our efforts to feel that pain, and not trivialize it through jokes.

How Kronk Became a Jewish Icon
Blessing on Chewing Gum
Was Rahab a Prostitute?
Extras In Our Own Epic
Comments
MOST POPULAR IN Current Issues
Our privacy policy