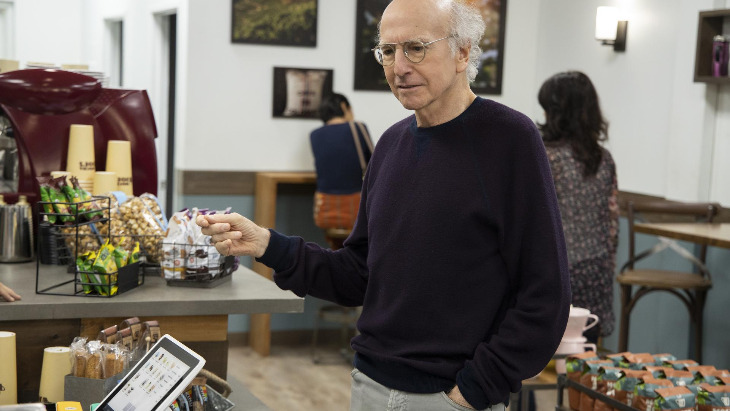 The Larry David sandwich is the most Jewish sandwich you can get.

In the first episode of Season 5 of Curb Your Enthusiasm, Seinfeld showrunner Larry David’s long-running sitcom, Larry David receives the honor of having a sandwich named after him at his favorite Jewish deli, Leo’s.

The sandwich in question is a toasted bagel topped with pickled red onions, capers, whitefish salad, sable, and cream cheese. “I’m not really a big fish guy, to tell you the truth. I’m more of a pastrami/corned beef kind of guy,” he says.

After the initial flattery, he tries to switch sandwiches with Ted Danson, whose sandwich features a far more “palatable” turkey, coleslaw, and Russian dressing filling. 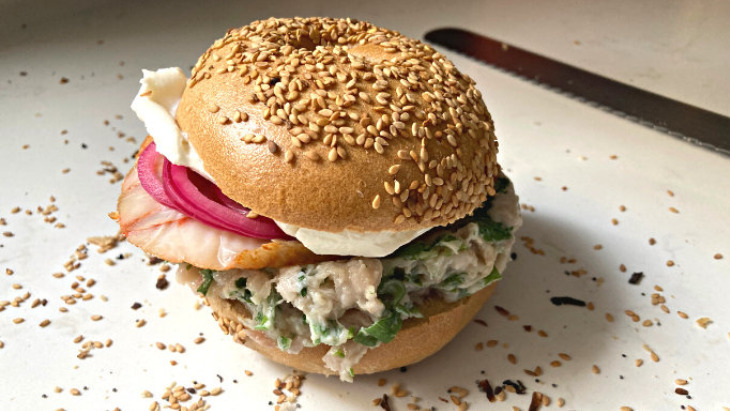 He later brings his father, Nat David, to try his sandwich, but his father has a bizarre reaction to the sandwich and has to be rushed to the hospital. What happens next is the setup for the rest of season 5, and I highly recommend you watch it for yourself.

Curb has been one of the most consistently funny and clever shows on TV since its very first episode and is constantly pushing the boundaries of comedy. Even creating the instantly recognizable “curb moment.” An apt title for when all the problems one inadvertently causes come back to haunt them, a consistent theme in Curb.

In addition to Curb’s contributions to pop culture and meme culture, the show has introduced a slew of dishes and foods into the zeitgeist. So let’s learn how to make the sandwich that had Larry David’s dad rushed to the hospital and the historical significance of its ingredients.

The sandwich is filled with Whitefish Salad, which is one of the most classically Jewish foods from early Ashkenazic cooking. Whitefish salad refers to smoked freshwater white fish mixed with herbs, chives, sour cream, or mayonnaise, with some opting for additional minced celery. Whitefish is a popular breakfast dish and is pretty much expected on the spread at Bris celebrations.

Sable, short for Sablefish, is another Ashkenazic Jewish classic. Packed with as many Omega-3s as salmon, known for its rich buttery flavor and smooth and flaky texture, it’s one of the most delicious Jewish fish for a reason.

Pickled Red Onions have slowly become one of my favorite toppings to put on pretty much anything. Burgers, tacos, and even on a particularly adventurous avocado toast.

Pickled foods often provide a needed tanginess in traditional Jewish cooking. Pickles and capers (which are also included in the sandwich) are very common deli-fare and this inclusion just makes sense.

The bagel is probably the most quintessentially Jewish food around. It’s simple yet so delicious when made right. Boiled, then baked for a beautiful caramel color and perfectly chewy interior. Made with just a few ingredients and occasionally a seed topping, but it is so hard to get right.

Some say what makes this delicacy so Jewish is the unique flavor the New York City tap water gives it. However, others say it’s all about the noticeable hole in the middle that originated from the Polish “obwarzanek” which was a circular pretzel-like bread with a hole in the middle.

The bagel’s significance in Jewish food is immense and is more than just a round bread with a hole at the center. For most Jews, it’s the nostalgia, the story, and the Jewish pride attached to the bagel that makes it so special.

In the “old country,” before Jews started to immigrate to America, Herring was a common snack in Jewish homes. Easy to preserve, cheap and hearty. When times were bad and anti-Semitism was rampant, the Jews had to find ways to make the fish last. And since refrigeration was not readily available to most homes, salt curing became the best viable solution.

When European Jewry made the move to the U.S. many of their nostalgic foods remained, albeit with slight variations based on their new quality of life. For example, in America, Jews started seasoning their fish with paprika, cold smoke, dill, and more.

What all great Jewish food has in common is that they are all products of the unique situations we found ourselves in throughout history. Economic struggles and anti-semitism forced us to find ways to adapt, from curing and pickling our vegetables to salting our fish to preserve them for longer. Despite the adversity, we have persevered and even created some tasty sandwiches in the process.

When I ate the “Larry David Sandwich” I wasn’t only reminded of some of the funniest moments from Curb Your Enthusiasm, but hit with a wave of nostalgia and sentimentality for all the Jewish flavors and scents in the sandwich. It’s important to learn our food’s history and appreciate Jewish food, because it’s one of the few connections we still have to our past. As former Israeli Prime Minister Yigal Allon said: “A people that does not honor its past, lives in a present of little substance and faces a future clouded in doubt.”

Get our recipe to make your own Larry David Sandwich here.

Aryeh Genger is a 18-year old from Beersheva, Israel. He believes in the power of connecting the spirituality of the Torah to modern day living. He produces music for local hip-hop artists and has a passion for food, philosophy, and music.

Food of Sorrow: Jewish Culinary Traditions For Mourning
For Every Individual, A Torah Scroll
Allegiance To The Monarch
Meet the Real You: Yom Kippur
Comments
MOST POPULAR IN Jewlish
Our privacy policy
Aish.com Is Looking for Great Writers