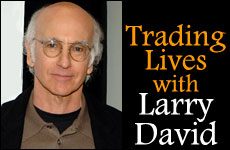 Taking on Larry's life for a summer -- along with his neighbor Kenny "Kramer" -- made me appreciate my own.

My first summer hiatus between seasons of my first hit television show was the first time in my life that I didn't have to grovel for a job. What an odd sensation for an actor.

I knew I'd be returning to the fledging late night comedy show "Friday's," ABC's answer to "Saturday Night Live" in mid July. I knew I'd have a paycheck and opportunities to make a mass audience laugh in mere months. Till then, I could do any darn thing I wanted. I had a new apartment in Los Angeles, had sublet my New York pad and was free as a little bird to relax, play and enjoy life.

Sooo peaceful in my garden apartment, I slept late, read a few books, saw a few friends, watched old movies, had a massage, hiked some hikes, sampled the wonders of security as a lifestyle. And within a week, I was panicked with purposeless, free-floating shame and guilt, wracked with teeth-gnashing anguish. I needed to take some action immediately! But what??

Luckily my fellow cast mate and buddy Larry David was experiencing the same stresses. He was pacing the length of his artist's garret at New York's Manhattan Plaza -- a federally assisted apartment complex for performing artists in Hell's Kitchen, mere blocks from the Improv Club -- like a stallion in too tight a stall. He phoned to commiserate about our new found success.

We decided we'd trade apartments and elude our anxieties by burying ourselves in each others' environments for a month. I could live the life of a standup, returning heroine to the Improv, see East Coast friends and family, steep myself in NY Theater and noise. Larry would be able to escape those very same elements by hiding out mid Hollywood at my quiet, isolating pied a terre. Each other's lives sounded great to each other.

We made household lists containing information on the operation of our respective rentals. Mine was pages long: detailing the functions of the laundry and its key, plant waterings, paying the maid and making her lunch, the garage situation, the best window for the view, the balcony chaise lounge's idiosyncrasies, the answering machine functions, freshening up the potpourri, and so forth. His had one entry: call a Kenny Kramer person who lived right across the hall, no matter when I arrived, who'd take care of everything.

Larry's list had one entry: call a Kenny Kramer person who lived right across the hall, who'd take care of everything.

We embarked/fled in opposite directions immediately. I took the red eye, cabbed to the grand lobby of the massive artists' residence the Manhattan Plaza and called Kenny Kramer at five a.m. for the keys to Larry's. Within minutes, a tall, slender, weary, wiry haired, vaguely depressed guy greeted me, schlepped my bags, showed me up to Larry's Spartan or simply never quite furnished studio lair. It had no chotchkes to dust, no naggingly great books piled on a bed stand to read. What a relief!

Kramer took me to the local diner on Tenth Ave. for a hearty breakfast. As I was a girl du jour in the press at that time, he made sure we sat near some of the NY Post reporters, all of whom he seemed to know and who made sly mention of our sudden liaison in the press.

As he showed me the finer points of the neighborhood, dry cleaners, bus stops, cab stands and the Plaza, he greeted everyone by name, nickname and weight gain/loss, and every dog, too, though rather cheerlessly. He was a boulevardier, a man about town, a bon vivant whose vive seemed to need reviving. I wasn't sure what "art" had entitled him to live in this residence, and asking an artist with too much free time on his hands "So what do you do?" can end a cordial acquaintanceship instantly. I didn't ask.

Within days, as the warm welcome from my friends and family cooled, and I'd seen all the good plays, my anxieties caught up with me, and indulging Kramer's indulging of me became my purpose, entertaining me his. Whenever I was just about to get claustrophobic in Larry's tidy, austere (no family photos, no memorabilia to tempt snoopers), Kramer would show up to whisk me away to eat at some eatery or racquet some balls at the Plaza's flawless courts.

I'd anticipated jubilant jamborees, eclectic exhibits, spontaneous dance in the hallways of the Plaza, but instead found a flavor of dourness throughout. Despite or because of their endowment in this well-appointed place. They seemed unhappy, going busily through the motions of an artist's life. It seemed to be the artists' lot to swim upstream with
compulsive activity to survive our own undertows. I realized there is no Witness Protection Program for tortured artists. No matter where I was, I was still an artist, currently cursed with a paying job to welcome her in July.

On my final day at Mr. David's domicile, Kramer took me for lunch, and gave me a warm goodbye, seemingly part of his duties as my personal concierge, although who had designated him as such was never clear. Was being my guide an arrangement with Larry? Was I an obligation or a mood elevator? Was I a debt or a pay off? At visit's end, I wasn't sure whether to tip him or charge him.

When we reunited, Larry told me how he soon went mad in my pad and sought comfort in wearing my clothes, most of which had been bequeathed to me by an ex boyfriend his size. As the clothes that brought me sad memories were his escapism, with apparent largesse I gladly rid myself of them by giving them to him. Apparently, trading lives with Larry had worked out well for both of us.

Jackie Mason: King of Jewish Comedy
It Takes A Lot Of Faith To Be An Atheist
How Instagram Brought Back This Nostalgic Soup
What Makes Eli Run?
Comments
MOST POPULAR IN Jewlarious
Our privacy policy