Stand Up and Sit Down 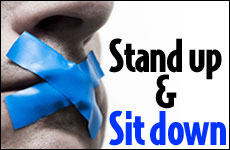 My first brush with stand up comedy was no laughing matter.

Stand up comedy is no laughing matter -- it's a tough business. I should know -- I am a lawyer. But it wasn't always going to be that way. I was supposed to be a stand up comic.

When I was nine, I was sure that I was Bill Cosby's long lost Jewish child. I ate a constant diet of Jello Puddin', danced around my house to Bobby McFerrin tunes, and loved to yell "THEO" at the top of my lungs for no particular reason. While my friends were listening to Duran Duran, Boy George and Corey Hart, I was listening to stand-up tapes. My favorite was the "Coz," but I soon became a fan of Richard Pryor and Eddie Murphy as well. In retrospect, I now understand why my school teachers were so shocked by my foul mouth and racially charged tirades against "them white folks."

At the time, I attended a Jewish summer camp in Kelowna, Canada called Camp Hatikvah. I loved anything to do with competition, so understandably, the highlight of my summer was something called Maccabia (color wars). It was like our very own Jewish Olympics where we couldn't really run very fast, or throw things that far, but were great at complaining when it got too hot.

When I was 13, they introduced a new event to the Maccabia lineup: the stand up comedy competition. This was the opportunity that I had been waiting for. All of those nights spent memorizing the routines of the comedy greats had been done for a reason.

Unfortunately, I was a heavy underdog because the resident camp funnyman was Jedediah Berman. My friends thought I was a fool to go up against him because all Jed had to do was break into his "Jedediyah was a bullfrog" routine and he would have the crowd in instant hysterics. I knew what the risks were, but this was my big chance.

The evening of the comedy and drama presentation came. Our team accountant (every Jewish sports team has one of those) calculated that we were in second place and needed a first place finish in the stand up competition to propel us to victory. Our team looked somber. They knew that Big Berman was virtually unstoppable. And true to form, he got up there and killed.

As I walked to the stage like a man marching to the gallows, I said to my team, "Guys do me a favor, and just laugh, even if you don't think I'm funny."

"That wasn't very funny Rich," called out one of the older campers from the back. Great, I already had my first heckler.

"By way of applause, who here goes to school in a carpool?" a few people applauded as I opened my routine. "Ya, me too. My friend's mother drives us in her Mercedes-Benz station wagon. Don't get me wrong, a Mercedes is a nice car, but why make it a station wagon? Isn't that a little bit of a waste? It's almost like having a Rolex alarm clock. Or Ralph Lauren toilet paper."

The laughter was building.

"And speaking of toilet paper, what's the deal with the camp's toilet paper supply? I mean, you can't take a bunch of kids who are used to the soft suppleness of 3-ply, and make them switch to the sand paper coarseness of 1-ply. It's like we've all been transferred from the Hilton to a maximum-security penitentiary. And what's worse, this 1-ply isn't even sturdy 1-ply. It's 1-ply recycled paper. I think that we are actually using old hamburger wrappers."

The laughter was uproarious -- no kid can resist a good toilet paper joke. From then on, the rest of my "set" was 13-year-old comedy magic. I won the comedy competition and our team was pronounced the victors of that year's prestigious Maccabia games. As for me, I was the new king of comedy.

The rest of my set was 13-year-old comedy magic. I was the new king of comedy.

I remember two things about the year that followed: my casino night themed bar mitzvah party and my note pad and pen that I carried around with me wherever I went, writing down comedy bits when they came to me. I had a whole year to prepare for the upcoming summer's stand up competition, and I didn't want to disappoint my fans.

But when the team captain called out our assignments on game day the next year, she said, "Rich, you are obviously going to represent us in the stand up competition, but I am going to assign a counselor to work with you -- Dave Kramer, he's really funny."

Wait a second, I was the reigning champion. Why did I need a writing partner? I wanted to be the next Bill Cosby not the next Smothers Brother.

I reluctantly agreed and met with Dave to come up with some material for my new set. We sat in the orchard, and I recited some of the bits that I had been collecting over the past year. Dave wasn't impressed.

"I don't know. It's not that your stuff is bad, but it's way too safe. It's not edgy enough," he explained wisely.

"But I won last year with stuff like this," I protested.

"I know, but what challenge is there in playing it safe? You have to take your comedy to the next level." I took a mental poll of what I thought my comic mentors would do. Eddie and Richard would go with the edgy stuff -- the Coz got outvoted.

The evening of the stand up and drama competitions arrived and our team statistician assured us that victory was ours. We were already in 1st place and even if we placed second in the evening's festivities (which was an impossibility I was assured), we were a shoe in.

The other two other comedians went first and were better than I had expected, but still not stellar. Then it was my turn. My team was confident, but I was still harboring some doubts about Dave's edgy material.

"So I bet everyone out there has a wish list of changes they would make to the camp if they were given the chance," I began, getting some nods of agreement from the crowd. "For example, wouldn't it be nice if the camp cook Marcy bathed more than once a summer? I mean, is it me or is she using the grease in her hair to lubricate our grilled cheese sandwiches..."

About 10% of the audience was laughing and the other 90% were visibly uncomfortable (included in the 90% was the cook's 6-year-old daughter -- not one of my finer moments).

I continued. "Let's be honest, should she even be allowed to touch the food at all? If I was camp director I would dress her and the rest of the kitchen staff in bee keeper uniforms."

"And speaking of the director, wouldn't it be nice if our camp wasn't run by a gorilla. Seriously, have you seen the hair on that guy? I saw some minks look at him the other day and say, ‘Why can't you guys make some fur coats out of that guy, and leave us alone.'"

Humor has the ability to uplift, to unite and to teach. But it can also hurt, divide and debase. It simply depends on how it's used.

The laughter was now down to .1% -- the camp janitor apparently found me very amusing. He only spoke Spanish.

You get the picture: the routine was better suited for the Def Comedy Jam than a summer camp for Jewish children.

I placed 3rd in the comedy competition and my team ended up slipping to second place overall. I went from Jerry Seinfeld to Carrot Top.

To make matters worse, the cook's daughter was in tears and the camp director called an immediate meeting with me and my unit head to discuss the idea of kicking me out of camp. I tried to explain to them that the material I had used wasn't even mine, but belonged to Dave Kramer -- my "head writer." They looked to Dave for his input, but he had conveniently taken the day off. Instead of kicking me out, the director gave me a long lecture about what is and what isn't funny. I don't remember much of what he said because I was preoccupied by thinking how hot he must get in the summer.

At the end of the session the camp director asked me if I had learned my lesson from the ordeal and I replied that indeed I had. I learned that humor is an extremely powerful thing. It has the ability to uplift, to unite and to teach. But it can also hurt, divide and debase. It simply depends on how it's used. So I guess I did learn my lesson after all –humor is nothing to laugh at.

A Letter to My Soul Mate

Blanket of Laughter
Near Death Experience Panel
The Western Wall: The Heart of the World
Ask the Right Question: Tisha B’Av
Comments
MOST POPULAR IN Jewlarious
Our privacy policy
Aish.com Is Looking for Great Writers