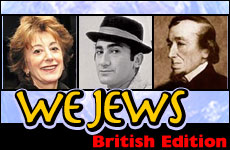 Daniel Radcliffe, Rachel Weisz, and Sacha Baron Cohen. All are British MOTs (members of the tribe) who exhibit their talent freely in Great Britain and worldwide.

In fact, today in Britain, Jews can be found in every trade, from fish mongers in East London to speechifying in the House of Lords. Jewish publications, and kosher food, particularly bagels, latkes, and brisket (ask for “salt-beef”) are sold in supermarkets. The contributions of British Jews to the arts, sciences, finance, and politics are now recognized, if at times, underplayed.

We Jews came to Britain in the 1100s from Rouen, France.

However, British-Jewish relations haven’t always been so free. Our discussion centers on Greater London, as throughout Jewish-British history, this is where the vast majority (now estimated at 250,000) settled and still remain.

A Shaky Start! We Jews came to Britain in the 1100s from Rouen, France in the wake of William the Conqueror. During the 12th and 13th centuries, we were highly restricted, heavily taxed, and penalized. Employment was limited to medicine or money-lending (as Christians weren’t allowed to practice “usury”). Our reputation as “The sharp Goniff” still haunts us. However, as Jewish gelt gilded the Exchequers coffers, we remained until …

Re-entry! During the 1600s, We Jews gelted our re-entry, negotiated by Oliver Cromwell and Amsterdam Rabbi, Menasseh ben Israel. After all, the Sephardi Jews living in Holland, were wealthy, with vast oversees connections. The Conversos “came out of the closet” and, in 1710, established the Bevis Mark Synagogue (still in use today.) George I encouraged German Jewish immigration. They were generally poor artisans or in the “rag trade.” Cries of “Clothes, clothes, old clothes” abounded in East London.

Over 600 years after the first Jewish settlers arrived, the city finally allowed Jews to attend university and expand our business and political interests. Between 1880 and 1914, Jews, fleeing pogroms swelled our numbers from 65,000 to 300,000. The established Jewish community, now more “British” than the “British,” had moved from the East End. The affluent, such as the Rothschilds and Montefiores lived in posh areas such as Mayfair and Park Lane while the middle classes opted for North and South London.

The predominately Orthodox newcomers, however, lived in overcrowded East End ghettos such as Whitechapel. Seen as a threat to emancipation, the established Jews, nevertheless attempted to “gentrify” them. Realizing that escaping the ghetto meant building successful businesses, these émigrés established new industries, including tailoring, cabinet and shoe making. Between 1918 and 1939 many moved to the north-western burbs, including Golders Green, still a “Jewish” area today.

A Patient and Silent MP:

Lionel de Rothschild was unable to take his seat in the Commons, as he refused to take the Oath which included: “on the true faith of a Christian.” Eleven years after his election, in 1858, he was finally able to do so, leaving out the phrase, however, he didn’t speak once during his 15 year tenure! His primary interest was to further Jewish opportunities.

We’ve all heard (or seen) a few “disagreements” between congregants. And so, PM Benjamin Disraeli was aptly named. His papa, after quarrelling with the Bevis Marks shul, baptized him at 13! Clearly his son was a better (and wiser) negotiator.

During the Napoleonic Wars, Nathan Mayer Rothschild (1777-1836) who moved to London in 1805, gave the government access to his overseas connections, and gelt to the coffers.

An important part of British culture relates to its tea shops, and Joe Lyons, which was among the largest chain, was created by the five sons of Samuel Glickstein in 1894. By 1981, there were over 300 tea shops, known for their working-class chic.

When we think De Beers, carots come to mind – and not the kind we put on gefilte fish. Cecil Rhodes got the big cred, but his partner was Jew, Isaacs Barnato (1852-97). The magician by trade conjured a “pot of diamonds” from a mine.

A Celebrity Jew Who Stands Tall: The Marvelous Maureen

If Jewish Brits tend to “conform,” and are now suffering, as are we all, from a rise

in anti-Semitism, one Jewish celebrity, actor, writer, and comic is staunchly front

and center of the storm: Maureen Lipman whose late husband, Jack Rosenthal,

wrote “The Bar Mitzvah Boy” among other plays. “In England, I’m the Jewish

bagel,” she quipped to the author. The wildly and eclectically talented Maureen

has played hundreds of roles, but reached true bagel status with the memorable

out loud, along with her disgust with fellow Jewish celebrity critics. Her

remarks in the Jewish Chronicle addressing them say it all: “To English, assimilated, sometimes self-despising Jews … where are you going to go when it hits the fan?

It doesn’t matter if you stand in Parliament or marry into the aristocracy, there

will be no Israel to receive you … . Why didn’t they put their ad in an Israeli

newspaper? Because it is more important to impress their fellow Englishmen than

to effect change in the situation.”

All You Ever Wanted to Know About Golems