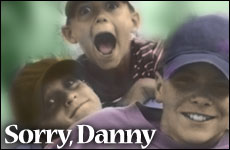 After 20 years of story telling, the realization hits that it was at someone else's expense.

Have you ever wondered what became of that slightly awkward, but well meaning kid that you went to school with as a child? Well I always wondered what happened to Danny Slippowitz. And I just found out.

Danny had it tough. He was from a low income family, enrolled in a private Jewish school with mainly middle to upper class children. His parents were recent immigrants from Israel, while most of our parents were born in America. In short, he was different.

But despite all of his differences, my best friend Neil and I decided to befriend Danny when he transferred to our school in the third grade. Sure, sometimes we thought he was a little "weird." When discussing which movie theatre we should go for the much anticipated Back to the Future, Danny suggested we go to the "Theatre Near You" because it was the closest. When doing our English homework together, Danny convinced us that the past tense of the word "done" was "doneded." "'I doneded my homework' -- I say that all the time," Danny maintained.

But it didn't really matter how weird he was, because Danny had one important thing going for him -- he was a nice kid.

We took the next step in our friendship when Danny started inviting Neil and me to his house for sleepovers. At the time, Danny's house was considered to be in the "wrong part of town," so we encountered some initial parental opposition. But our mothers relented after we turned up the heat with a few hours straight of us saying, "Mom, what should we do? We're bored!"

Danny's house was definitely different than ours. They kept their spare furniture on the front porch. Their family dog, Shprintzee, had a severe limp in all of its legs, which meant that it could basically only roll around on its stomach. They also had emaciated rabbits in their backyard. But to 10-year-old boys, this kind of stuff didn't bother us -- we actually thought it was cool. Danny's pets couldn't run away from us, and we could sit comfortably on the front porch and grab a pop from the fridge without even going inside.

The three of us would do things that most boys do -- ride our bikes, wrestle and go to the corner store to buy candy. And no sugar fix for Danny was complete until he bought a Caramilk. He was fascinated by how they got they got the caramel inside.

When we arrived on the first day of school in the seventh grade after a summer of no contact, we discovered that Danny wasn't there anymore. We figured that he transferred to a school that wasn't as academically challenging, but none of us knew for sure. One thing we did know was that as nice as Danny was, he was never going to make it far in life. And with that, we never saw Danny again.

Like a story that gets told and retold until it only faintly resembles the original, our memory of Danny and his family developed into a caricature.

But we did talk about him. As we got to high school – and even college -- Neil and I would reminisce about Danny and his family, and all of their idiosyncrasies. We talked about them so much, they started to take on a life of their own. Like a story that gets told and retold until it only faintly resembles the original, our memory of Danny and his family developed into a caricature.

Neil and I graduated from college, got jobs, and bought homes. The make-up of the city has changed over the years, and Neil ended up purchasing his house around the corner from where the Slippowitz family used to live. This, of course, caused us to once again retell all of our stories about Danny and his family that we had been telling over the past 20 years. But as we recounted them this time, something was different. We began to wonder if, in fact, we've been laughing at Danny and his family, instead of laughing with them.

But what were we to do? Track them down and try to make amends? Even if we were to do that, the likelihood that they lived in the same house or even remembered us was extremely slim. Yet, our curiosity was insatiable. We had to find out what happened to Danny.

Neil started making evening strolls around his new neighborhood to see if he could pick up any signs that the Slippowitz's were still around. After some special-ops type reconnaissance -- pictures taken with his camera phone -- Neil reported that there was indeed still furniture on the porch, and a mezuzah on the door. Our chances of a reunion just got a shot in the arm.

But even if the Slippowitzes did still live there, what were we going to do? Just knock on the door? After much thought and discussion, that's exactly what we did.

We picked up a few Caramilks and walked up the steps that we had seen so many times before. I rang the door bell and a figure appeared in the hallway. Sure enough, it was Mrs. Slippowitz. She looked at us suspiciously.

"Hi Mrs. Slippowitz. It's Neil and Gideon," Neil said nervously. "We used to be in Danny's class. I just moved into the neighborhood and wanted to say hi...and I brought some chocolate bars." She looked at us more closely, then swung the door open and invited us in.

We chatted like old friends, but the big question on our minds was: what happened to Danny? Mrs. Slippowitz told us that he didn't come around much these days. Why? Was something wrong? Was he involved in something untoward as everyone had predicted? Had he turned to a life of drugs? Organized crime perhaps? "Danny has turned into something of a real estate mogul," Mrs. Slippowitz said proudly. "He's buying and selling apartment buildings all of the time, so his work keeps him quite busy."

Twenty years of story telling that we did at their expense came crashing down on us.

A real estate mogul?! Danny Slippowitz who never "doneded" his homework? I think I can speak on behalf of my entire elementary school when I say that we are absolutely shockeded.

But I was only surprised because Danny didn't turn out to be the caricature I had made him into. And his parents were nothing like the people we had invented. They were actually nice and normal. Twenty years of story telling that we did at their expense came crashing down on us.

Neil and I are not pious Jews, but we wanted to seek forgiveness, especially with the High Holidays looming ahead. After all, God only grants forgiveness to those who seek it from others, and our trip down Slippowitz lane made us realize that we had treated them unfairly over the years, whether they knew it or not.

True, we didn't exactly ask them for forgiveness, but sometimes actions speak louder than words. In our own way, we tried, and I hope that God recognizes the effort. And just in case He expects more, Neil and I would like to say it more officially here: Danny, and Mr. and Mrs. Slippowitz, we would like to ask you for your forgiveness if we have wronged you in any way over the years. And Danny, we hope you enjoy the Caramilks.

Neil Simon and the American Jewish Experience
Vayelech 5783: Regret and Repent
Rabbi Sacks: Focus On the Important, Not the Urgent
Put Your Foot Down: Are Human Feet Poorly Designed?
Comments
MOST POPULAR IN Israel
Our privacy policy
Aish.com Is Looking for Great Writers