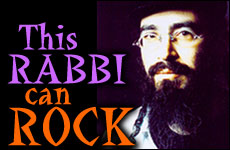 Shmuel Skaist drinks beer and thinks of himself as a rock star. He also has six kids and is a rabbi. He sees no contradiction between the two.

You shouldn't be faulted if after listening to the album Protocols, you thought it was the new BNL release. Protocols is not the product of a Jack Johnson or Steven Page, but rather, a rabbi with a long beard and peyot (side locks). And no, the artist is not Mattisyahu -- it's Rav Shmuel.

The unusual story of Shmuel Skaist begins when he was a rabbi in a yeshiva high school for boys in New York area. Trying to come up with a way to get his unruly teenage students to stay seated and actually listen, he attempted something unconventional -- he brought in his guitar and started playing. "It was then that I realized the power that music had as a way to communicate with people," says Skaist who goes by the name "Rav Shmuel" when performing because that's what his students call him.

He then moved to Israel where he lived for seven years and worked with American students who were studying at various overseas programs in Israel. His classes were more MTV unplugged than Torah lecture, with half of the sessions spent playing guitar, and the other half sharing his views on life and the Jewish people's purpose in the world.

After his stint in Israel, Skaist returned to New York to head up the Yeshiva program at IDT -- the telecommunications firm which employs a number of religious Jews who combine their work with Torah study. Unable to give up on his love for music, he did a Google search for "Open Mike Night New York" and the results led him to the Sidewalk Café in New York's East Village. Audiences were initially taken aback by his rabbinic appearance, but once he started playing music, they responded positively to his sound.

"I started getting a little bit of a following," admits Skaist humbly. "Not thousands of people mind you, but after a while fifty to a hundred people would start coming to a show if they heard that I was playing."

According to Skaist, two main components of his writing that set his music apart are honesty and humor. The honesty comes across in the form of his view of the world. But unlike some faith-based music, he tells his listeners what he thinks as opposed to telling them what they should think. "The most important thing about my music is that it's not preachy. I always found that the teachers who I had that were the most preachy, were the ones I listened to least, so I don't want that message to come across in my music."

But aren't rabbis supposed to have all of the answers? Some could argue that it shows weaknesses in the Jewish religion if rabbis are asking questions so openly. Rav Shmuel disagrees. "If you look at our historic literature, you will find it is filled with theological questions," Skaist argues. "Take for example, two great rabbis of the previous generation -- Rabbi Joseph Soloveitchik and Rabbi Moshe Feinstein. If you look at Rabbi Soloveitchik's writings he shares an intimate part of himself where he grapples with questions that show a certain internal angst. Rabbi Feinstein on the other hand was a halachist (legalist), and we wouldn't know one way or another if he had any internal struggles or questions. I think there is room for both types of rabbinic figures."

As serious as he sounds, Rav Shmuel points out that humor is also a vital component to his music. This is evident in the title track
to his first release in which he suggests tongue in cheek that the infamous Tsarist anti-Semitic work, "The Protocols of the Elders of Zion," is actually true. "Humor is really just looking at the things we know in the world to be true, but showing the absurdity to them. It's a useful tool for social commentary."

Skaist believes that there is a deeper, almost mystical connection between the Jewish people and humor. "King David wrote in the Book of Psalms, that 'then [in the Messianic Age] our mouths will be filled with laughter.' Only then, when we look back on history and realize that there was a purpose to all of the suffering that we went through, will we be able to laugh. I think if we as a people were not able to laugh, we would not be able to survive."

"In the Messianic Age we will look back on history and realize that there was a purpose to all of the suffering that we went through, and we will laugh."

In fact, Skaist actually sees a connection between the two mediums that he has been using -- humor and music. "Humor allows people to communicate. When you make someone laugh, you open them up, and then it's easier to get your message across. Much like music itself."

But is the world of rock music and pop culture really the place for a nice rabbi like Rav Shmuel? Skaist thinks so, but he makes a distinction between "lower pop culture" and "intelligent pop culture." Lower pop culture of the Brittany Spears variety is basically beyond help. "Advertisers are looking for easy messages, like boy meets girl -- everyone gets that," explains Skaist.

But according to Skaist, there is room in intelligent pop culture for an artist who plays good music and has an honest message. His role model is unusual for a man in his position -- Pearl Jam's Eddie Vedder. "I really looked up to Eddie Vedder and Pearl Jam in the 1990s, because they were making great music, but the music that meant something. Every once in a while there will be people who make it into pop culture that make people think." Skaist wants to be one of those people.

Until that time, Rav Shmuel is content playing good music, making people think and perhaps making them laugh at the same time. Combining these interests is nothing new however. One summer Skaist headed up a group of Jews who followed the band "Phish." His group was called "Gefilte Phish," showing that Jews, music and humor go together like gefilte fish and horseradish.

Click here to watch an excerpt from Rav Shmuel's video for "Protocols."

To get more information on Rav Shmuel, you can do so via his website at ravshmuel.com

Did You Know They’re Jewish?
In the Shadow of David and Goliath
Where Do the Laws of Nature Come From?
Saadiah Gaon, Rashi and Maimonides: How Three Rabbis Revolutionized Judaism
Comments