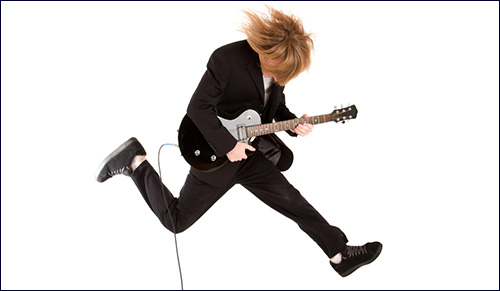 Where would rock and roll be without these Jews?

Some things just belong together. Peanut butter and jelly. Ireland and four-leaf clover. Jews and rock and roll.

Wait, Jews and rock and roll? You knew that, didn’t you? In case you didn’t, though, this is the perfect time for a reminder. On June 4th of this year, the world’s greatest and longest-running rock band, the Rolling Stones, played its first concert in Israel, at HaYarkon Park, in Tel Aviv. So, now, when you hear, “Next year in Jerusalem,” it could very well be referring to the Stones’ future itinerary. So, let’s celebrate that by taking a selective look at some of the world’s greatest Jewish rock and roll performers and bands. Chosen People, are you ready to rock?

“Next year in Jerusalem” could be referring to the Rolling Stones’ future itinerary.

Though none of the Rolling Stones is Jewish and most people don’t immediately make the Rolling Stones-Jewish connection (I don’t think I’ve ever heard a rabbi or cantor mention Mick or Keith), the Stones have Jewish connections beyond their recent concert appearance in Israel. Their first manager, Andrew Loog Oldham, a recent Jewish inductee into the Rock and Roll Hall of Fame, molded the band’s image into the “Anti-Beatles” bad boys, giving them a more dangerous and rebellious image. In 1966, he turned over the management to Jewish accountant Allen Klein, who later worked for the Beatles. And notably, in their 1978 song, “Shattered,” from the Some Girls album, the Stones allude to the once thriving, mostly Jewish garment industry with what is perhaps the only use of Yiddish in a Top 40 hit: “Shmatta shmatta shmatta, I can’t give it away on Seventh Avenue.” And perhaps some Jews recognized in the Stone’s hit, “You Can’t Always Get What You Want,” a common Jewish complaint: “You can’t ever get what you want.” And you there, by the way, get off of my cloud!

Lou Reed, who died in 2013, was born Lewis Allan Reed to a Jewish family at Beth El Hospital in Brooklyn and grew up in Freeport, Long Island. He and John Cale formed the iconic band, The Velvet Underground (1964-1973), and served as its singer, guitarist and principal songwriter. The band was managed by Andy Warhol and was Warhol’s house band at his studio, The Factory, and at his Exploding Plastic Inevitable Events. Their 1967 debut album, The Velvet Underground and Nico, was named the 13th greatest album of all time and “the most prophetic rock album ever made,” by Rolling Stone magazine in 2003. Reed subsequently went on to a successful solo career, as did Cale. Some of his band’s hits include “Sweet Jane,” and “Walk on the Wild Side.” A novelty version, “Walk on the Kosher Side,” was recorded by Gefilte Joe and the Fish. Rolling Stone’s list of the 500 Greatest Albums of All Time also included two of Reed’s solo albums – Transformer and Berlin. In an interview before he passed away, he said that his goals as a writer were "to bring the sensitivities of the novel to rock music," or to write the Great American Novel in a record album format. Which would be perfect for those who don’t like to read!

Do you think Jewish when you hear the songs, “Jump,” “Panama,” or “Runnin’ With the Devil”? They were originally sung by Van Halen’s David Lee Roth. Roth is an American rock vocalist, songwriter, actor, author, and former radio personality. Definitely an achiever, which is certainly part of the Jewish tradition. Roth was raised Jewish, the son of ophthalmologist Nathan Roth and Sibyl Roth. Roth met the Van Halen brothers while attending Pasadena City College. The band’s first album sold more than two million copies. He left the band in 1985 to embark upon a solo career. After more than two decades apart, Roth re-joined Van Halen in 2006 for a North American tour that became the highest grossing in the band's history. In 2007, Roth was inducted into the Rock and Roll Hall of Fame.

On May 24th, 1941, Robert Allen Zimmerman (who later changed his name to Bob Dylan, inspired by poet Dylan Thomas) was born in St. Mary’s Hospital, in Duluthy, Minnesota. His paternal grandparents, Zigman and Anna Zimmerman, emigrated from Odessa to the U.S. following the anti-Semitic pograms of 1905. His maternal grandparents, Benjamin and Lybba Edelstein, were Lithuanian Jews who arrived in the U.S. in 1902. Dylan’s parents, Abram Zimmerman and Beatrice Stone, were part of the area’s small but close-knit Jewish community. In May, 1954, Dylan had his bar-mitzvah. Though Dylan did a stint with Christianity in the late ‘70s to early ‘80s, he later became a supporter of the Chabad Lubavitch movement and has privately participated in Jewish religious events including the bar-mitzvahs of his sons.

Do you ever think of the iconic rock band KISS as a Jewish band? (And if so, should it be called KISHKA?) Perhaps we should. Half its members are Jewish, if you count later members Bruce Kulick and Eric Singer. Then there’s Paul “The Starchild” Stanley, born Stanley Harvey Eisen. And co-founder, bass guitarist and co-lead vocalist of the rock band, Gene Simmons was born Chaim Witz, in Haifa and attended Yeshiva Torah Vodaath. His mother and uncle were the only members of the family to survive the Holocaust. Known by his stage persona The Demon (Perhaps it should be called The Golem), he described a recent meaningful trip to Israel as, “a life-changing experience.” With KISS, Simmons has savvy marketing instincts and gratitude to Judaism for his strengths: “Being a Jew, you realize your strongest weapon is your mind.” That and, of course, the ability to wear a black and silver jumpsuit while playing guitar and breathing fire. Which is how I generally relax on weekends, but then, who doesn’t?

Confessions of a Jewish Jedi

Marilyn Michaels: Jewish Show Biz Royalty
Don’t Believe in Other Gods Versus God is One
Seeing Without Eyes
Why Shouldn’t We Eat Whatever We Want?
Comments
MOST POPULAR IN Jewlarious
Our privacy policy
Aish.com Is Looking for Great Writers