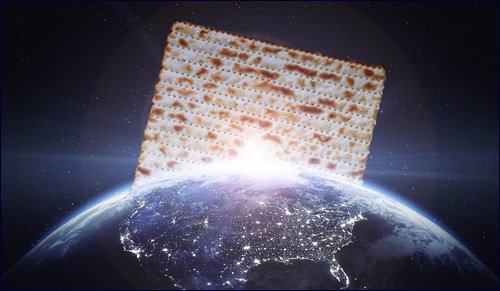 It is a time when We Jews everywhere celebrate freedom, liberty and courage. In telling the Passover story we’re forever reminded of our history of slavery – and our liberation. The remarkable events of Pesach are, sadly, more than a commemoration. Similar circumstances still exist throughout the world, which has made the principles of Passover constantly relevant to peoples of all racial and ethnic groups. Our holiday, then, is reflective of the world we have, and do live in. Did you know …

“Passover” President Lincoln passed away on the 5th day of the holiday.

The time: Sunday, April 9, 1865. The place: Appomattox Courthouse, Virginia. The event: General Lee surrendered to Grant. The Civil War that took over a half million American lives, was over. Did you know that the news broke the next day, which was also the morning before Passover was to be observed? “Union” Jews couldn’t miss the irony, the congruence of the two events. And, for survivors of the bloody war, the question, “Why is this night different from all other nights?” no doubt had multiple meanings.

When Lincoln died on April 14, the fifth day of Passover, from his wounds, inflicted by John Wilkes Booth, virtually the entire Jewish community mourned, deeply and personally. What you probably don’t know is that the first official words of mourning in a religious setting for the assassinated President came from a synagogue! As Lincoln died on a Saturday, Congregation Shearith Israel in New York, the oldest congregation in the U.S. in its Shabbos services, deviated from the norm and the rabbi recited a prayer for the slain President. This was also likely the first time this was ever done for a non-Jew (which brought about some controversy). Jews throughout the land draped their altars in black, Yom Kippur hymns replace Passover music and many rabbis cried openly and unabashedly, as did their congregants.

President Lincoln’s friendship with Jewish Americans was a matter of record. For example, he overturned Grant’s anti-Semitic General Order#11, and supported Jewish military chaplains. More, in his eulogy for Henry Clay in 1852, before the Civil War, he used imagery from the Torah saying: “Pharaoh’s country was cursed with plagues, and his hosts were drowned in the Red Sea for striving to retain a captive people, who already served them more than four hundred years. May like disasters never befall us!” Did you know that after the assassination, an analogy was drawn in The Jewish Record between Moses dying before seeing the Israelites enter the Promised Land, and Lincoln dying before seeing the North and South re-unite? The parallels between Lincoln and Passover are profoundly etched, as are the principles.

A RARE, MYSTICAL JEWISH HAGGADAH IS IN DISPUTE IN ISRAEL?

How many have heard of the legendary Bird’s Head Haggadah? If so, did you know it is the oldest illustrated Passover manuscript that has survived? The Haggadah has taken on almost mystical properties as the Israelites are portrayed with bird-like heads; a fact that has confounded scholars. Some believe the heads on the figures are those of a beloved mythical creature, the griffin, which doesn’t violate the biblical prohibition forbidding representing human likeness. The writer, known only as Menahem created the work around 1300 in Southern Germany.

The conflict: The masterpiece has been housed in the Israel Museum after being purchased years earlier by its forerunner, the Bezalel National Museum. Less than a year ago, a Jewish family descended from the Marum family claimed rightful ownership of the Haggadah – and wants a settlement.

Here are the claims – and the moral dilemma. You decide.

Eli Barzilai, who lives in Jerusalem, is pursuing ownership on behalf the family claiming the 14th-century Haggadah was a wedding gift from his grandmother's family to his grandfather, Ludwig Marum, a lawyer from Karlsruhe who served in Germany's parliament and opposed Hitler. Ultimately Marum was killed in the Kislau concentration camp.

Years later, Marum’s former law partner, Shimon Jeselsohn, who fled the Holocaust and after WW ll, moved to Israel, read about the museum purchase. Recognizing the piece, as Marum kept it in their office, Jeselsohn followed up with the museum. He was told it was brought to Jerusalem by an immigrant after the war who sold it to the museum. Jeselsohn grew suspicious after talking to the immigrant and got in touch with Barzilai’s aunt Elisabeth in New York. After traveling in 1984 to see it, Elisabeth wrote the museum, explaining that while the immigrant sold it illegally, the family wanted it to stay at the museum "for the benefit of the public." And there it stayed.

The family did nothing more, as according to Elisabeth’s daughter, Dominique Avery, her late mother believed she had no recourse. Her cousin, Barzilai, however, did. Several years ago he heard a speech by E. Randol Schoenberg, the attorney responsible for retrieving the Klimt paintings, and retained him.

Barzilai, age 75, is seeking a compromise with the Museum over the priceless piece, and reportedly asking under 10 million dollars.

While the museum has acknowledged the Marum family’s ownership of the manuscript until 1933, the moral dilemma is sensitive as the museum is not only a prized national institution, but has acted as caretaker of a large number of cultural pieces of the victims of the Holocaust.

THE MOST FASCINATING PASSOVER VIEW WAS TAKEN FROM OUTER SPACE?

Many of us know that right before Passover in 1985, Jewish astronaut Jeff Hoffman, asked to bring matzah with him into space. Worried that matzah crumbs might find their way into something important (like a heat shield), he took a mezuzah along, which he velcroed on the sleeping bunk. (Nailing it to the door might also present problems.) Ah, but did you know it was astronaut Jeff Williams, who, days before Passover, 2016 showed us our homeland from outer space. The non-Jewish astronaut, who has always loved history, a love passed to him by father, a history teacher, wrote that he was “fascinated” by this extraordinary view.

To all, a happy, healthy, and hopeful Passover!

My Life as a Jewish Cartoon
Were Adam and Eve Jewish?
How I Learned to Love the Multiverse
10 Big Jewish Inventions
Comments