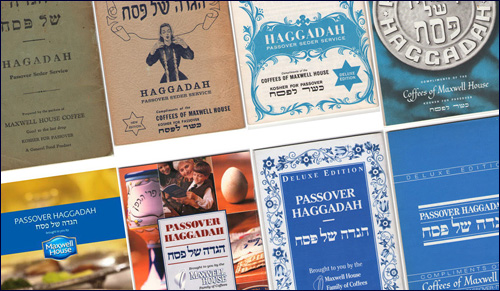 Do you know who made the first American Haggadah? If you think it was Manischewitz, think again!

You won’t see most of these amazing finds in courses or history books, yet this information is not only edu-taining, but will forever change the way the world sees Jews and Jewish culture.

For thousands of years Jews everywhere have celebrated the Exodus of the Israelites from Egypt in the second millennium B.C.E.as told in the Bible (Exod. 1–15). Passover begins on the evening of the fourteenth of Nisan, and is observed for seven days in Israel and eight days elsewhere. Jews are required to recite the Exodus story (Exod. 13:8) at the Seder, eat the unleavened bread of affliction, matzah, and are prohibited from eating foods containing leaven (hametz). But did you know that …………. Let’s look.

When many American Jews think “Haggadah” (the narrative recounting the Jewish Exodus from Egypt) they think Manischewitz, a giant leading Jewish food and wine company that also produces Haggadahs. But I bet few think of Solomon Henry Jackson! Yet, this immigrant from England (who died ca. 1847 probably in New York) was a pioneer Jewish printer. Establishing the first Hebrew printing press during the 1820s, his material was written using both Hebrew and English fonts. In addition to many Jewish works, it was Jackson who published the first American edition of the Passover Haggadah in New York in 1837! On both editions, the title pages reads, “Translated into English by the late David Levy of London.”

The “second” American edition was published by his son, John M. Jackson, who succeeded his father. The material is essentially the same with a few “external” changes. On the back cover the younger Jackson announces that he can supply blank ketuboth (marriage contracts) printed to order “on parchment if required” along with a family and pocket luach (calendar). On the second edition, published in 1850, the only attribution reads: J. M. Jackson, 190 Houston Street and 203 Bowery. The Hebrew chronogram on both reads “Next Year in Jerusalem.” Meanwhile papa Solomon was also the first to print a translation of the Sephardi prayer book into English: The Form of Daily Prayers, According to the Custom of the Spanish and Portuguese Jews (1826). Between 1823 and 1825 he edited and published the first Jewish periodical in the U.S. called The Jew. More, as an active member of the Ḥevrat Ḥinnukh Ne'arim, he was an ardent supporter of promoting Jewish education.

And while we’re on the subject, Dov Behr, in 1888, a Lithuanian immigrant opened the first matzah-making factory in Cincinnati, Ohio. He adopted the name Manischewitz, naming his factory the B. Manischewitz Company and developed an entirely automated method of matzah production. By 1920, he was the world's largest matzah producer — at 1.25 million rectangular, sheet-like matzahs a day — but always adhered to the original kosher rules. Manischewitz endured some controversy for his use of machines, but did you know that after Behr spent 13 years studying the Talmud in Jerusalem, even the most hardened traditionalists eventually considered him an acceptable authority on matzah.

In 1973, Apollo 17 astronaut Gene Cernan shouted, "Man, oh, Manischewitz," the matzah company's slogan, in the middle of his moonwalk.

DID YOUR AUNT RIVAH REALLY HOLD THE LARGEST SEDERS? THE CHABAD IN NEPAL DOES!

Who among MOTS doesn’t have a relative (or maybe it’s us) who throws a Seder for the entire family, with “kin” shlepping in from Florida to Jerusalem? Ah, but did you know that the Nepalese Chabad Center probably holds the record for the biggest Pesach celebration, welcoming thousands of participants. More fascinating, as prior to 1986, there was no organized Judaism or indigenous Jews in Nepal! The credit goes to The Jerusalem-based NGO Tevel b'Tzedek ('The world with Justice'), under its orthodox head Micha Odenheimer who reached out to young Israelis to teach sophisticated farming techniques to inhabitants of small villages. In 1986, the Israeli embassy in Kathmandu organized a Passover celebration for the 7,000 Israelis who visit Nepal yearly. In 1999, the Nepalese Chabad House, inaugurated by Rabbi Chezki Lifshitz and his wife Chani took over the event. By 2006, the annual Passover Seder hosted 1,500 “guests.”
The "world's largest Seder" requires 1,100 pounds of Matzah! By 2014 the event drew 1,700 although there was a threatened by a strike that delayed a shipment of matzah. The “doings” at the successful Chabad House Nepal was the basis of an Israeli miniseries, "Kathmandu" in 2012 by the network Reshet.

One thing we know. Matzah is easily breakable – but rarely on the perforations! But did you know that in 2014, the Transportation Security Administration (TSA) told Jewish travelers: they’ll take care of our Passover matzah! The TSA offered ways to safeguard our precious bread that included sensitive pat-downs on inspection. Instead of putting our boxes in the plastic containers that slide through a scanner, Jews could opt for a more gentle screening of the holiday food. Their website on the matters said: “Passengers traveling with religious items, including handmade matzah, may request a hand inspection by the TSO [transportation security officer] of the items at the security checkpoint. Some travelers will be carrying boxes of matzah, which are consumed as part of the Passover ritual. Matzah can be machine or handmade and are typically very thin and fragile, and break easily.”

While Pesach makes up only three percent of the calendar, did you know that some say that the celebration – the most widely observed of the Jewish holidays in the United States-- accounts for over 40 percent of kosher food sales in the U.S. each year boosting it to a $2 billion industry? More, yearly new kosher for Pesach products are introduced. For example, in 2001 alone there were 600 new ones According to Kosher Today, celebrants can now choose from more than 4,000 items – from pizza to noodles. Could it be that Passover, with all these new alternatives may lose some of its traditional culinary traditions? Is this a case where history may indeed “forget?”

According to John Cooper in Eat and Be Satisfied, the Jews in the Rhineland developed the breeding and fattening of geese, as far back as the middle ages. The slaughter of a duck or goose on Hanukkah provided the fat used for frying latkes, while the remaining fat and skin was rendered separately to be set aside for Passover, proving once again, We Jews love our leftovers!

Have a miraculous Passover!

Is the Joker Jewish?

Jewlarious's Top 11 Features of 2008
Scientific Curiosity and the Divine Encounter
Mind Over Milkshakes
Love the Convert
Comments
MOST POPULAR IN Jewlarious
Our privacy policy
Aish.com Is Looking for Great Writers