Selma and the Jews 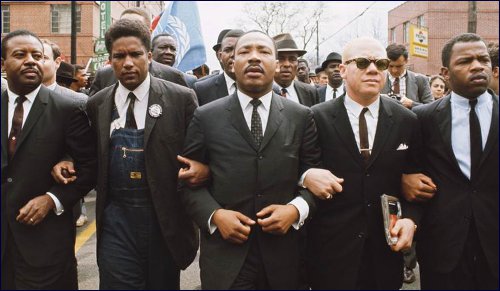 In our time of increasing anti-Semitism, understanding between blacks and Jews needs to be strengthened.

First the movie, now the march.

Selma is back in the news – and deservedly so. This past Saturday marked the 50th anniversary of the seminal Selma march across the Edmund Pettus Bridge. On March 7, 1965, peaceful civil rights protesters tried to cross the bridge. They were brutally beaten by police officers with billy clubs in a scene that shocked the nation and became widely known as “Bloody Sunday.”

John Lewis, then 25 years old, suffered a fracture of the skull. Today he is a congressman from the state of Georgia. Together with Barack Obama, the first African-American President of the United States, as well as a host of other supporters, they reenacted that long ago march for freedom last Saturday. And, as Lewis correctly pointed out, “Our country will never ever be the same because of what happened on this bridge.”

America’s history of racism and bigotry was decisively altered. The heroes of Selma and the civil rights movement brought the United States a long way towards fulfilling its self-defined biblical ideal that “all men are created equal.”

Sadly, though, one part of the story seems to have been forgotten, or perhaps purposely omitted.

There was an iconic moment in the original march from Selma to Montgomery. It was a scene reproduced round the world. Walking arm in arm, in the very front row, alongside the Reverend Martin Luther King were Nobel Prize winner Ralph Bunche together with white bearded, head covered Rabbi Abraham Joshua Heschel. Rabbi Heschel represented a living symbol of the powerful role Jews had come to play in the movement for the rights of blacks to equal rights, dignity and respect before the law. Many Jews, martyrs to the cause like Schwerner and Goodman who received posthumous Presidential Medals of Freedom in 2014, were in the forefront of those willing to give their lives for what Jews saw as a contemporary parallel to the biblical story of the Exodus.

Blacks and Jews both know that their struggle against bigotry is far from over.

How to explain then the incredible excision of not only Rabbi Heschel but just about any recognizable Jew from the movie portrayal of that event meant to lionize the heroes of Selma? It is strikingly and symbolically significant that the historic moment that brought about cataclysmic change occurred on a bridge. That, after all, is the most profound meaning of the story - creating a bridge between peoples separated by prejudice and unwarranted enmity. And yet in the aftermath, a film ostensibly produced to glorify bridging differences seems to have gone out of its way to omit the contributions of the very people who gave the world the mantra of “let my people go” as crying call for the universal quest for freedom.

Selma the movie doesn’t want to suggest that blacks had no help from white people. Its agenda isn’t portraying all others as devils. It admits the positive contributions from readily recognizable different groups. Shown are many white clergy, wearing clerical collars and other religious garb, who participated in the Selma events.

In one scene, Martin Luther King hugs a Greek Orthodox prelate, obviously meant to be Archbishop Iakovos, who participated. Another shows a group of white segregationist thugs beating and killing James Reeb, a Unitarian minister from Boston who came to Selma to join the march. The one group however strikingly missing, the one religious denomination from which no single representative can be found, are Jews.

Is the omission merely forgetfulness – or does it highlight another bridge that still remains to be crossed, a bridge of recognition, of acknowledgment and of gratitude between blacks and Jews that needs strengthening in our time of increasing anti-Semitism?

We ought to remember what first brought Martin Luther King and Rabbi Heschel together. It was in January 1963 that the National Conference of Christians and Jews sponsored a conference in Chicago entitled "Religion and Race." The Rabbi opened the conference by comparing the civil rights struggle with a decidedly Jewish parallel. He told the gathering that “At the first conference on religion and race, the main participants were Pharaoh and Moses. Moses's words were, 'Thus says the Lord, the God of Israel, let My people go that they may celebrate a feast to me.' While Pharaoh retorted: 'Who is the Lord, that I should heed this voice and let Israel go? I do not know the Lord, and moreover I will not let Israel go.' The outcome of that summit meeting has not come to an end. Pharaoh is not ready to capitulate. The exodus began, but is far from having been completed.”

King was profoundly taken by Heschel’s biblical allusion. That was the beginning of their friendship. The shared pain of two people with a common history of slavery and mistreatment pointed to mutual cooperation in the struggles still facing them in the future.

Realistically, blacks and Jews both know that their struggle against bigotry is far from over. Racism and anti-Semitism are moral cancers for which we have yet to find an effective cure. At the commemorative march last Saturday, President Obama articulated his recognition that “the work of Selma is not yet over.” Similarly, from the murders of Jews in Europe to the threats of total annihilation from Iran, we can’t escape the truth that the anti-Semitism of the Holocaust is not a historic anomaly impossible of repetition.

Reconciliation is a two-way street. African Americans and Jews ought to feel confident about each other’s full support - the kind of support, unacknowledged by Selma the movie, which Jews gave to the civil rights movement and the kind of support African-Americans, by virtue of their hard-earned sensitivity to injustice and prejudice, should surely now extend to Jews as well.

After all, what we both so desperately seek after our shared histories of oppression is the original meaning of the name Selma – a word that comes from the ancient Arabic for shalom, or peace.

Religion in America is Fading

Why Were the Graves of So Many Jewish GIs Marked by a Cross?
Vayelech 5783: Regret and Repent
Rabbi Sacks: Focus On the Important, Not the Urgent
Put Your Foot Down: Are Human Feet Poorly Designed?
Comments
MOST POPULAR IN Current Issues
Our privacy policy
Aish.com Is Looking for Great Writers