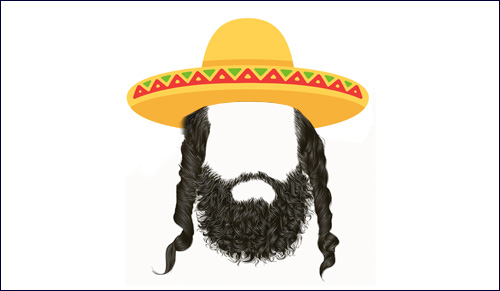 Geography! In my day, it wasn’t one of the hipper courses. How many of us were fascinated by the difference between an isthmus vs. a peninsula? I apologize to Ira Kazinsky in seventh grade who was heavily into the Isthmus of Panama, and is now making breakthroughs in Panamanian tombs.

Which brings me to Latin America and in particular, Latino and Latina Jews.

This fascinating population has long been overlooked, misunderstood, and little-known. More, I’ve found that despite being an “America,” many of us in North America view South and Central America as being “down there – somewhere.”

There are approximately 500,000 Latin American Jews, but to avoid persecution they often kept a low profile. More, a minority within a minority, whether Jews are still in Latin America or have ventured North, many have experienced difficulty “fitting in” among non-Latino Jews and U.S. Jews.

Yet, whether they put guacamole on matzo on Passover or drink kosher tequila on Cinco de Mayo, they are ardent Jews. As Jewish Latinos get little attention from Jews or Latinos in the U.S. let’s look at some little-known, but fascinating facts about our Latino MOTS.

WHO ARE LATINO JEWS?

Jewbans, Mexi-Jews, Jewminicans or Kosher-Ricans. Who are they? Many Jewish Latinos distinguish themselves from “Hispanics” – a term used interchangeably in the United States. In the interest of clarity, if possible, let’s dig deeper.

The origin of the word “Hispanic” is from the Latin word for "Spain."

The Difference between “Hispanic” and “Latino.”

“Hispanic” refers to the people and culture from countries formerly ruled by the Spanish Empire, for example, Mexico, most of Central, South America and the Greater Antilles. The U.S. government adopted the term during the Nixon administration and “Hispanic” became part of the census wording in 1980.

“Latino” refers specifically to those in the U.S. who are of Latin American nationality along with their offspring. Latin America includes countries in South America and North America (including Central America the islands of the Caribbean, French-speaking areas of Haiti, French Guiana, the French West Indies, and even French-speaking Canada) whose inhabitants mostly speak Romance or even Native American languages.

Some find it offensive to be called Hispanic or Latino preferring to be called by their country origin, such as Mexican, Colombian, Cuban, Salvadoran, Bolivian, etc. In a survey released by the Pew Hispanic Center, about half said they identified themselves most frequently by their family's national origin. In the U.S., Jews who are both Latino and Jewish number about 200,000 forming a small but thriving community. This minority within a minority are generally proud of their dual identities, yet feel they are distinct group – among the larger Jewish and non-Jewish Latino U.S. population.

While most of us might assume Latino Jews are from a Sephardic background, many are cut from the same Yiddish-speaking Ashkenazi cloth as the majority of U.S. Jews who ran from Eastern Europe in the early 20th century, but settled in Latin American countries and cities, rather than land at Ellis Island. Outside of the U.S., hundreds of thousands of Ashkenazi Jews live in Brazil, Argentina and Mexico. The Sephardim from Latin America are also an influential group and include for example, Jews who left Turkey and other countries in the Levant following WW1.

In general, the few studies done have found that Latin American Jews are both highly educated and earn more than $100,000 yearly, which is higher by 70% than U.S. Jewish households.

The majority feel strongly connected to Israel and their families’ Latin American homelands, even if they weren’t born there. Latino Jews while relating to the general Latin American community via the Spanish language, close family relationships, a love of parties, and an entrepreneurial mindset, nevertheless feel differences in class, income and education between themselves and non-Jewish Latinos.

LOOKING FOR A SPACE OF THEIR OWN

“[Latino Jews] are looking for a space of their own to articulate their multiple identities,” said Dina Siegel Vann, who is originally from Mexico City and directs an institute for Latino affairs at the American Jewish Committee.

The AJC commissioned a study, which was conducted by Latino Decisions, a public opinion firm that looked at 10 focus groups of Latin American Jews in five cities with significant Latino-Latina Jewish populations: Chicago, Houston, Los Angeles, Miami, and New York.

According to the survey, Latino American Jews while relating to the U.S. Jewish community’s customs and culture, focus group participants, overall, felt that U.S. Jews were more formal in their religious and social practices, “making it difficult to relate at a personal level” as many doubted that most U.S. Jews even knew of their presence.

While more than 80 percent are U.S. citizens, and others, permanent residents, less than 1 in 3 identifies as American. “In previous generations … it was a moment of pride to say you were American, but now that’s changed,” said Siegel Vann. The reasons include:

“In L.A. or Miami, which have large concentrations of Latino Jews, there’s less pressure to integrate into American life. More significant is that even though Latino Jews felt they had good reasons to leave Latin America, they often did so with regrets, in contrast to previous generations of immigrants to the U.S. Some Latino Jews still own property in Latin America, and almost all have family and friends there. As a result, most still identify with the Latin American country they came from (69 %) rather than as American (31 %).”

But the group is stepping into the spotlight. For example, NYU Livewire reports that Los Angeles-based Ariana Lopez started the first clothing line aimed at Latino Jews with her label Jewtina splashing that name on shirts in sparkly silver letters to encourage pride and a sense of community.

Then there’s Simon Guindi Cohen, a third generation Mexican Jew who moved to the U.S. 10 years ago. Cohen revived a group for young Latino Jews in New York primarily through Facebook. With over 1300 members the focus is on socializing monthly and fund-raising.

THE FUTURE: A WIDER PRESENCE WITHIN THE JEWISH COMMUNITY

Activist Latino Jews are still looking for ways to leverage their identities to build local and world bridges and integrate into mainstream Jewish life. A higher profile would be of benefit to all Jews, given their education, wealth and passion for Israel which would add a strong voice to Jewish organizations and efforts.

More, the influence of Latinos in the U.S. is increasing. Siegel Vann says: “[Although we] don’t generally inhabit the same spaces, we have to come together and become aware of the commonalities, the linguistic, cultural and historical ties the two communities have. Latino Jews could play an important role in being the link between Jews and Latinos, so what we’re trying to do is create more and more spaces for this interaction and cooperation to happen.”

Did You Know They’re Jewish?
Scientific Curiosity and the Divine Encounter
Mind Over Milkshakes
Love the Convert
Comments
MOST POPULAR IN Jewlarious
Our privacy policy
Aish.com Is Looking for Great Writers