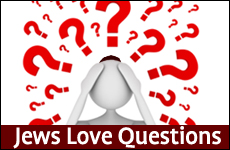 To be or not to be? You call that a good question?

"Why do Jews always answer a question with a question?"
“How should they answer?” – Dear Abby

I was raised in a “Yinglish”-speaking household. Before age three, I’d already soaked up 3,000 years of Yiddishkeit. But more, unbeknownst to me, I assumed that’s how the world worked.

Until college. One Jew among a 100 Gentiles is like throwing a rock in a pond. The concentric circles I created went from the East River past the Mighty Mississippi. By Winter break, my young dorm mates were returning home to places like Missoula, Zwingle, and Chugwater, shocking their parents with:

But more, they learned the Queen of Yiddishisms! Answering a question with a question!

After all, I’d spent my tender years not answering questions by asking more questions.

MA: "A Mrs. Goldman in the beauty parlor mentioned there’s a youth group at the shul, so you’ll run over now?"
ME: “Which Mrs. Goldman? Marvin’s mom?
MA: “So once he wore his pants on backwards?”
DAD: “Is she Marvin’s Mrs. Goldman?”
MA: “I ask questions under the dryer? What am I, a genealogist?!”
BUBBE: “A mother lets a son go out that way?!”
ME: “Can I finish my homework now?”
MA: “Why do I bother?”

I was 12 then. But the years only increased my question to question-non-answer ratio.

Needless to say, I was 25 before I could form a declarative sentence.

Before we dismiss this odd speech pattern to merely “more exaggerated stereotyping,” Leo Rosten, in his seminal The Joys of Yiddish not only confirmed this syntax as a specifically Jewish trait, but viewed “the question” as one way to distinguish between Jew and Gentile! Questioning, deriving from Talmudic debate imbues us with the unusual tradition of saying: “I believe! But nu, if I ask You’ll ‘show me?’” But more, through skepticism we analyzed the often treacherous world around us, and learned that an answer may be dangerous, misleading, obvious, unknown, or unnecessary.

While today, with assimilation, stylistic lines have “crossed over,” our propensity to “ASK?” still lingers in conversation, debate, music, and of course, in our humor! In humor and every day speech, we verbal Jews have even created “helper” words and phrases. With a simple flip of a verb, or a change in cadence, with typical Yiddishe flair, we’ve heightened, punched, and yes, evoked more implied “questions”

The Shift: The ploy of emphasizing particular words in a question, not only changes the question, it leads to yet another question! Take “Is this a serious relationship?” Simple question right? Not right.

NU? Next to “oy,”“nu” is probably the most versatile word in Yiddish, capable of conveying a sigh, grimace, sneer, pride, scorn, delight ... or the ultimate question: “Did you hear?” or “Do you believe ...?”

“Maybe.” The adverb, meaning uncertainty/perhaps, as in “Maybe we should bake the brisket a trifle longer,” turns into a Yinglish question with a little creative placement.

“So ... ?” The most overworked (and extraneous) word in Yinglish has to be “so” (without a comma). In fact, “so” often turns whole statements into whole questions!

“Already,” as in: “He was already quite dead when we retrieved the knife from his chest” said Sherlock; “already” meaning “previously.” We Jews, however, have co-opted this word to add an extra zetz to our queries.

So, is the question, just a question that leads to a question? Or is it more? Anyone who speaks or has grown up with Yiddish also knows its majesty. Honed by Talmudic scholarship, which has transcended time as a virtual question-answer debate, the form has also formed and given voice to our fears, hopes, dreams, and passion.

Coming from a place of marginalization and anxiety, we Jews knew that before answering any general question, it was wiser (and safer) to find out where we stand in the equation before making a comment which required a confidence, a strength we weren’t allowed on the world stage.

Yet, as usual we also turned the “gruel” of the Question to “kishke!” In America, we were not only given more opportunity to speak, but we used the “Question” with exquisite nuance to touch the kishkes, the soul, of Jews and Gentiles alike.

A rabbi once said: "We are closer to God when we are asking questions than when we think we have the answers."

And of course, there’s the inimitable Gertrude Stein who asked in her typical style: "Suppose no one asked a question, what would be the answer?"

Coming to a Theatre Near Jews!
Bechukotai 5782: Divine Retribution
Behar 5782: Working to Live or Living to Work?
The Wholeness of Being Broken
Comments
MOST POPULAR IN Funny Stuff
Our privacy policy