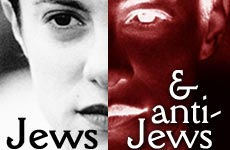 Hatred of Israel is a crutch Arab states have to give up.

The day after Israel's failed assassination attempt on Hamas leader Abdel Aziz Rantisi, a "deeply troubled" President Bush let it be known that he did not think such attacks helped Israeli security. He was concerned lest the strike undermine the momentum he is trying to create for a "two-state" solution to the Palestinian crisis, part of his larger effort to extend peace and democracy in the Middle East. In response, the Jerusalem Post declared itself deeply troubled, too -- by the failure of the said operation to eliminate the man who directs terror operations in Gaza. The Post believed that the American president would have done better to recognize the threat Rantisi represents to American security.

The Jerusalem Post has a point. President Bush may understand more clearly than his predecessors the nature of the threat to Israel's security. The attacks of Sept. 11 brought home to him the similarities between the two democracies. Along with most Americans, the Bush administration now grasps how the freedoms of an open society leave it vulnerable to assault. If America is duty-bound to strike the bases of those who threaten its security, no matter how far they are from its shores, then Israel, too, which constitutes the fighting front line in the war against terror, must root out the terrorists within and along its borders.

Yet the White House still cannot bring itself to admit the true nature of the aggression against Israel. It still tends to treat the regional crisis as "a conflict of two people over one land" that can be resolved by the creation of a Palestinian state. According to this view, since Jews and Arabs both lay claim to the same territory of Israel-Palestine, some division of the territory between will bring about a peaceful resolution. This is the assumption behind the "road map" the president presented at the recent meetings in Egypt and Jordan, inviting the Palestinians to halt their terror and Israel to withdraw some of its settlements from the disputed lands.

The Arab war against Israel is no more a territorial conflict than was al Qaeda's strike against America.

Unfortunately, the Arab war against Israel is no more a territorial conflict than was al Qaeda's strike against America, and it can no more be resolved by the "road map" than anti-Americanism could be appeased by ceding part of the U.S. to an Islamist enclave. From the moment in 1947 when Jewish leaders accepted and Arab rulers rejected the U.N. partition plan of Palestine, the Arab-Israeli conflict bore no further likeness to more conventional territorial struggles. Arab rulers defied the U.N. charter by denying the legitimacy of a member state. Arab countries refused to acknowledge the existence of a single Jewish land. Arab rulers did not object to Israel because it rendered the Palestinians homeless. Rather, they ensured that the Palestinians should remain homeless so that they could organize their politics around opposition to Israel.

At any point during the past 55 years, Arab governments could have helped the Palestinian Arabs settle down to a decent life. They could have created the infrastructure of an autonomous Palestine on the West Bank of the Jordan and the Gaza territory that Egypt controlled until 1967, or encouraged the resettlement of Palestinians in Jordan, which constitutes the lion's share of the original mandate of Palestine. Rather than fund the Palestine Liberation Organization to foment terror against Israel they could have endowed Palestinian schools of architecture, engineering, medicine and law. What Israel did for its refugees from Arab lands, Arabs could have done much more sumptuously for the Palestinians displaced by the same conflict. Instead, Arab rulers cultivated generations of refugees in order to justify their ongoing campaign against the "usurper."

This is hardly the first time that the Jews have served as the pretext for a politics of opposition. To cite only the most notorious example (whose outcome President and Mrs. Bush witnessed during their recent tour of Auschwitz), Hitler used the supposedly illegitimate presence of the Jews as the excuse for tightening control over all the instruments of state. His promise to rid Germany of "the Jewish vermin" ushered in an assault on democratic culture that gained popular support by targeting an unpopular minority. Anti-Semitism camouflaged the Nazi will to power and the imposition of totalitarian controls: In the name of limiting the "influence" of the Jews, Hitler delimited the power of the courts, the media, and the educational system. As a young German named Sebastian Haffner noted at the time, "[the Nazis] provoke a general discussion not about their own existence, but about the right of their victims to exist." Suddenly, the Nazis had everyone debating the question of the Jews rather than questioning the legitimacy of the discriminatory laws against them.

The autocrats who govern Arab societies have used the "Zionist entity" to deflect attention from the worst aspects of their rule.

In almost identical ways, the autocrats who govern Arab societies have used the "Zionist entity" to deflect attention from the worst aspects of their rule. The unwanted presence of the Jews became the rallying point for internal dissatisfaction with the mounting problems of Arab regimes. The drumbeat against Israel invited the world to debate the iniquities of the Jews rather than question the legitimacy of the attacks against them. This comparison is not intended to equate the Germans with the Arabs, except in the ways that both exploited anti-Semitism to achieve broader political goals. Both used the alleged threat of "the Jews" to excuse their own failures. Anti-Semitism in both situations linked otherwise warring groups of the Left and Right.

The problem with anti-Semitism in its older and newer varieties is that it seems to serve its patrons so well. Without question, Arab rulers successfully deflected attention from their offenses by their decades of war and propaganda against Israel. Even the liberal Western media that might have been expected to support a besieged fellow democracy have long since focused on alleged Israeli abuses instead of on the abuses of their Arab accusers.

But, just as happened in Europe, the Arab obsession with Israel grew increasingly destructive not only of its Jewish targets but also of the sponsoring regimes. Attacking Jews consumed energy that should have been directed at alleviating the misery of Arab subjects. Blaming the Jews postponed democratization, which begins with people taking responsibility for themselves.

Moreover, anti-Semitism metastasizes very quickly; its culture of hatred and its appeal to violence cannot be contained. Although Arab governments tried to direct the war against Israel according to their political needs, Islamist and nationalist groups espousing the same ideology sprang up independently, sometimes in defiance of government control. Anti-Semitism morphed into anti-Americanism -- not because America supported Israel but because America represented the same challenges of an open, democratic, competitive society. The Jews' function as a bulwark of democracy was determined by the despots who tried to crush them. America did not so much fight on the side of the Jews as find itself forced to tackle the anti-Jews.

It goes without saying that President Bush must subordinate other considerations to America's security and interests. And Americans obviously would be better served if there were no conflict in the Middle East. Yet until Arab leaders give up the crutch of anti-Semitism they can make no real progress toward responsible self-government, and it is futile to pretend that obsession with Israel is compatible with Palestinian independence. Rantisi greeted the "road map" by organizing major attacks against Israel, which he calls "our land, not the land of the Jews." America can't hope to win its war against terror while ignoring some of its major perpetrators and propagandists.

Ms. Wisse, a professor of Yiddish and comparative literature at Harvard, is the author of "If I Am Not for Myself: The Liberal Betrayal of the Jews" (Free Press, 2001).

The Rabbi and the Professor

Another Holocaust Museum?
Korach 5782: Visit to Lift the Spirit
That Time The Ivy League Found A Way To Limit Jewish Enrollment
Would You Rather Be Right or Happy?
Comments
MOST POPULAR IN Israel
Our privacy policy