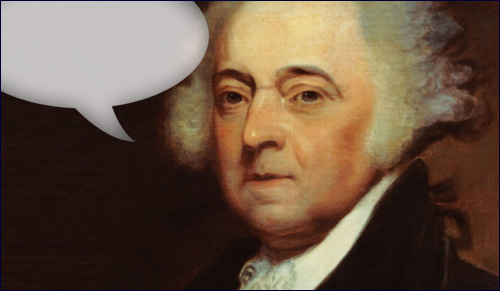 Stop what you’re doing and give your Jewish pride a boost!

1. “The preservation of the Jews is really one of the most single and illustrious acts of divine Providence… and what but a supernatural power could have preserved them in such a manner as none other nation upon earth hath been preserved.  Nor is the providence of God less remarkable in the destruction of their enemies, than in their preservation… We see that the great empires, which in their turn subdued and oppressed the people of God, are all come to ruin… And if such hath been the fatal end of the enemies and oppressors of the Jews, let it serve as a warning to all those, who at any time or upon any occasion are for raising a clamor and persecution against them.”

2. “What is the Jew?...What kind of unique creature is this whom all the rulers of all the nations of the world have disgraced and crushed and expelled and destroyed; persecuted, burned and drowned, and who, despite their anger and their fury, continues to live and to flourish. What is this Jew whom they have never succeeded in enticing with all the enticements in the world, whose oppressors and persecutors only suggested that he deny (and disown) his religion and cast aside the faithfulness of his ancestors?!

“The Jew – is the symbol of eternity. ... He is the one who for so long had guarded the prophetic message and transmitted it to all mankind. A people such as this can never disappear.

“The Jew is eternal. He is the embodiment of eternity.”

Leo Tolstoy, What is the Jew? printed in Jewish World periodical, 1908

3. “I will insist the Hebrews have [contributed] more to civilize men than any other nation. If I was an atheist and believed in blind eternal fate, I should still believe that fate had ordained the Jews to be the most essential instrument for civilizing the nations ... They are the most glorious nation that ever inhabited this Earth. The Romans and their empire were but a bubble in comparison to the Jews. They have given religion to three-quarters of the globe and have influenced the affairs of mankind more and more happily than any other nation, ancient or modern.”

4. “None of the resplendent names in history – Egypt, Athens, Rome – can compare in eternal grandeur with Jerusalem. For Israel has given to mankind the category of holiness. Israel alone has known the thirst for social justice, and that inner saintliness which is the source of justice.”

5. “The Jews started it all – and by ‘it’ I mean so many of the things we care about, the underlying values that make all of us, Jew and Gentile, believer and atheist, tick. Without the Jews, we would see the world through different eyes, hear with different ears, even feel with different feelings ... We would think with a different mind, interpret all our experiences differently, draw different conclusions from the things that befall us. And we would set a different course for our lives.”

Thomas Cahill, The Gifts of the Jews: How a Tribe of Desert Nomads Changed the Way Everyone Thinks and Feels, New York: Nan A. Talese/Anchor Books, p 3.

6. ”...If statistics are right, the Jews constitute but one percent of the human race. It suggests a nebulous dim puff of stardust lost in the blaze of the Milky way. properly, the Jew ought hardly to be heard of, but he is heard of, has always been heard of. He is as prominent on the planet as any other people, and his commercial importance is extravagantly out of proportion to the smallness of his bulk. His contributions to the world’s list of great names in literature, science, art, music, finance, medicine, and abstruse learning are also away out of proportion to the weakness of his numbers. He has made a marvelous fight in this world, in all the ages; and had done it with his hands tied behind him. He could be vain of himself, and be excused for it.

“The Egyptian, the Babylonian, and the Persian rose, filled the planet with sound and splendor, then faded to dream-stuff and passed away; the Greek and the Roman followed; and made a vast noise, and they are gone; other people have sprung up and held their torch high for a time, but it burned out, and they sit in twilight now, or have vanished. The Jew saw them all, beat them all, and is now what he always was, exhibiting no decadence, no infirmities of age, no weakening of his parts, no slowing of his energies, no dulling of his alert and aggressive mind. All things are mortal but the Jew; all other forces pass, but he remains. What is the secret of his immortality?”

7. “Mankind, East and West, Christian and Muslim, accepted the Jewish conviction that there is only one God.  Today it is polytheism that is so difficult to understand, that is so unthinkable.”

8. “Some people like the Jews, and some do not.  But no thoughtful man can deny the fact that they are, beyond any question, the most formidable and the most remarkable race which has appeared in the world.”

9. “Certainly, the world without the Jews would have been a radically different place. Humanity might have eventually stumbled upon all the Jewish insights. But we cannot be sure. All the great conceptual discoveries of the human intellect seem obvious and inescapable once they had been revealed, but it requires a special genius to formulate them for the first time. The Jews had this gift. To them we owe the idea of equality before the law, both divine and human; of the sanctity of life and the dignity of human person; of the individual conscience and so a personal redemption; of collective conscience and so of social responsibility; of peace as an abstract ideal and love as the foundation of justice, and many other items which constitute the basic moral furniture of the human mind. Without Jews it might have been a much emptier place.”

Paul Johnson, A History of the Jews, Epilogue

Who are the Jewish US Supreme Court Justices?

My Children's Jewish Future
Adam and Eve Were Vegan
Bechukotai 5782: Divine Retribution
Behar 5782: Working to Live or Living to Work?
Comments
MOST POPULAR IN Jewish Society
Our privacy policy