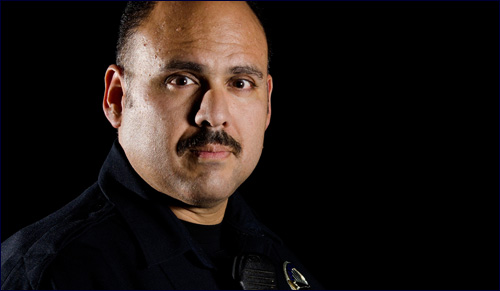 Working to protect Rabbi Teitelbaum, he gained insight into the essence of the Jewish people.

Living in New York City is tough on cars. Pot holes and sharp debris on the road leads to bent rims and punctured tires.

One day while driving near my home in Queens, the inevitable happened. My tire went flat. I pulled over, took out my cell phone, called AAA, gave my location to the dispatcher, and waited.

About half an hour later a Latino man in his mid-60s pulled his truck behind me. He got out, looked at the car and then looked at me. "Hello, my name is Donny," he said as he extended his hand. He then began speaking in Yiddish.

He shook his head smiled and said, "No."

I laughed and asked the obvious question. "So where did you learn Yiddish?"

"I picked it up many years ago when I was hanging out with one of your buddies," he said teasingly. "Rabbi Yoel Teitelbaum from Williamsburg. You heard of him?"

"The great chassidic leader?" I asked in disbelief.

Donny would dress like a chassid and scan the crowds looking for infiltrators.

Donny explained that he was a retired NYPD cop. While on the force, his job was to protect Rabbi Teitelbaum – not only from outsiders but also the throngs of chassidim that push to get near him. Donny was assigned as the rabbi's bodyguard – at home, in shul and at public gatherings.

Donny described how he would dress like a chassid – a Latino with beard and sidelocks (peyos), scanning the crowds, looking for infiltrators.

"How could you tell a real chassid from an impersonator?" I asked.

"You guys are always hunched over your books," he explained. "If someone was standing a little too straight I kept my eye on him. He was either an outsider... or someone who ain't serious about his studies," he laughed.

Donny reminisced about the kindness of the rabbi's wife, and how she supplied him with a steady stream of cholent and kugel.

Donny then asked if I knew the expression "Yiddishe kup."

"Of course'" I replied. "It refers to Jews as a smart and clever people."

Donny became serious, knowing he had me where he wanted. "I heard you guys used to live in Israel with your capital in Jerusalem. I heard that you had a Temple – a beautiful place where you all got together for the holidays – right?"

"I also heard that about 2,000 years ago you were exiled because you guys didn't get along with each other. True?"

"I also heard that if you guys could just learn to get along with each other, God will move you back to Jerusalem and rebuild the Temple."

Donny then leaned toward me, looked me straight in the eye and said, "So if you guys are so smart, how is it that in 2,000 years you haven't figured out how to get along?"

I had no answer.

The Torah tells us that unity of the Jewish people was a prerequisite for the revelation at Mount Sinai. The verse describes the encampment of the Jews by the mountain, united as “one person with one heart.”

It all starts with the realization that while Jews many be different from one another, we are all one family. We are part of the same unit, connected at the core, sharing the goal of Tikkun Olam, making the world a better place.

The upcoming holiday of Shavuot celebrates the giving of Torah at Mount Sinai. Now is an ideal time to work on attaining this consciousness and unite as a people.

Rabbi Moshe Greene found his way to Aish HaTorah after graduating from the University of Michigan in 1979. After a year of inspiration under the tutelage of Rabbi Noach Weinberg, he moved to Far Rockaway, NY learning under Rabbi Shlomo Freifeld in Yeshivat Shor Yoshuv. He has been a rebbe there for over three decades. He also serves as a senior lecturer with the Jewish Enrichment Center in Manhattan, NY and as a teacher and guitar strummer with Heritage Retreats and Sinai Retreats during winter break and summer months.

5 Ways to Get the Most out of Hebrew School

Rejoicing during Corona: How to Make this an Incredible Passover
What Does Kosher Mean Literally?
Live Abortion Panel
Morality and Abortion: Three Views
Comments
MOST POPULAR IN Jewish Society
Our privacy policy