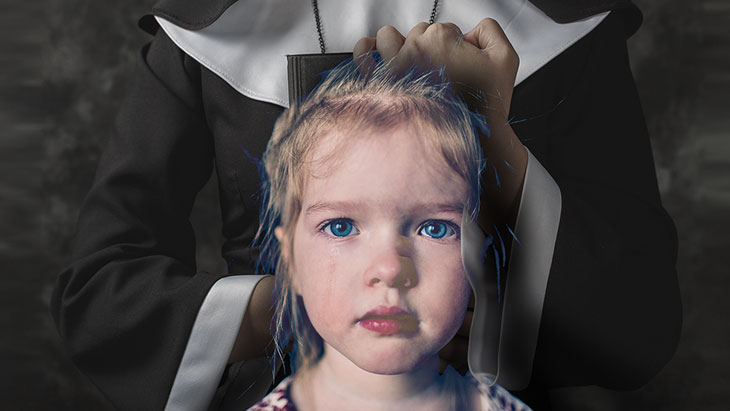 During the Holocaust these nuns hid Jewish children. Sometimes they didn't want to let them go.

Yehoshua Milansky* a successful wholesaler in Vilna, was a single parent of three young daughters when World War II began in 1939. His wife had died of an illness before the war, and he was raising the girls, Yetta, Shira and Rachel on his own. Rachel was the baby, and she held a special place in his heart since she was named for his dear mother.

After occupying Poland at the beginning of the war, the Nazis made their move on Lithuania and invaded the great city of Vilna – the Jerusalem of Lithuania and a center of Jewish learning for centuries

In June, 1941 the Jews were forcibly moved into a ghetto and Yehoshua and his daughters did the best they could to survive. Soon the Nazis would liquidate the Vilna ghetto, so Yehoshua found righteous gentiles – former business associates – who agreed to hide him and his two older daughters. These gentiles had nothing to gain and everything to lose but they still chose to help Yehoshua as a way to thank him for all the years he had helped them business-wise. During the challenging years between the first and second world wars Yehoshua declined to “play hardball” and increase his margins at the expense of his desperate vendors. Instead he used it as an opportunity to be a “kiddush Hashem”, being an exemplary role model, without realizing that he was also “investing” in the survival of his family.

While the situation was tolerable for Yehoshua and his older daughters, taking care of Rachel became untenable due to her tender age. As the alternative was almost certain death, this left Yehoshua with a single yet almost unfathomable option – to hand her over to a church orphanage where she would be cared for, physically and spiritually, by Catholic nuns.

The nuns – who were already hiding other Jewish children – assured him that they’d watch over Rachel and  reunite her with the family after the war.

The nuns – who were already hiding other Jewish children – assured him that they’d watch over Rachel and reunite her with the family after the war. He kissed and hugged little Rachel, and with a heavy heart he watched her new “family” take the toddler into her new home.

For the duration of the war, Yehoshua took care of his two older girls, Yetta and Shira, as they moved secretly from house to house in unimaginable situations. Miraculously, they managed to stay alive. Rachel was never far from his thoughts and he never missed a chance to send a message to her even though it meant dealing with black marketeers and other less-than-upstanding types who managed to not just survive but actually thrive during the Holocaust.

By May of 1945 the Jews were liberated and Yehoshua lost no time returning to Vilna with his daughters to reclaim his beloved Rachel. While there, he was united with other survivors including his cousin Chava Leah, a pre-war “family favorite” with Yehoshua’s daughters.

He rushed to the orphanage and eagerly rang the bell. One of the nuns answered and he said, “My name is Yehoshua Milansky. Before the war I entrusted you with the safety of my daughter Rachel. I’d like you to take me to her so I can have her back and reunite her with her sisters.”

The nun turned pale and looked at him in disbelief. 95% of Lithuania’s 200,000 Jews had been exterminated by the Nazis. Yet here stood one of Vilna’s Jews, demanding his daughter. Many churches had protocols in place for this type of situation. Rather than risk losing a soul already “promised” to the church, she told him that unfortunately Rachel was no longer there; she had been discovered and exterminated.

Yehoshua was in shock and inconsolable. His dear Rachel – gone! “Are you sure?!” he asked.

In a state of shock, Yehoshua asked his cousin Chava Leah to help him find Rachel. Over the next few weeks they returned to the orphanage a few times to search every room and building. But there was no sign of Rachel.

Despondent, Yehoshua decided to accept the reality of the situation and move on with his older girls to Palestine and become part of a dream called “Israel.” He spent his last night in Vilna falling into a fitful sleep.

In a dream his mother, Rachel, his daughter's namesake, appeared to him. She said two terse sentences: “Rachel is noch dorten. Fohr nisht! Rachel is still there. Do not travel!”

His late mother appeared in a dream and told him that his daughter was still alive in the orphanage.

Yehoshua woke up with a start. He couldn’t believe what had just transpired. His dear late mother had just told him that his daughter was still alive in the orphanage. Could it be true? Or was it just his subconscious giving him false hope?

He couldn't leave without finding out. That morning, he shared his dream with Chava Leah and she suggested that instead of going back to the church alone, they ask a military policeman to accompany them.

The MPs were very open to going beyond the call of duty when it came to helping anyone who had survived the Nazi atrocities and agreed to send one of their men. The three of them rang the bell of the orphanage. The nun who answered was shocked to see Yehoshua and Chava Leah; weren't they supposed to be on their way to Palestine? And seeing them in the company of an MP caused them to be visibly nervous. “I told you, your daughter is dead! She’s not here!” the nun said with far less confidence.

Even before the words were out of her mouth Chava Leah’s eyes were riveted on a row of girls’ coats hanging in a locker room within sight of the door – a row of coats that the nuns felt was now safe to return to their usual place.

“How could you possibly know that?" asked the nun.

In the coat there were two barely discernible letters, a reish and a mem, the Hebrew initials of Rachel Milansky.

“Because of this!” said a triumphant Chava Leah as she lifted the coat’s collar and pointed to two Hebrew letters sewn into its underside. There were two barely discernible letters, a reish and a mem, the Hebrew initials of Rachel Milansky. Chava Leah, a talented seamstress, had sewn the coat as a gift for Rachel and had sewn those letters into the collar.

Buoyed by the discovery of the coat, Yehoshua – with Chava Leah and the MP in tow – ignored the nuns’ consternation and carefully searched room by room, as well as areas they were not privy to in past searches.

Their perseverance and faith paid off and they found Rachel. She barely recognized her father who had visibly aged over the few years they were torn apart. They embraced, and Yehoshua said, “It’s time to go, Rachelleh. Our family is back together now.”

Yehoshua finally had his three girls back. After arriving in Palestine – and being there as the State of Israel was declared – he married his cousin Chava Leah, and they had a fourth daughter Feyga. Chava Leah treated Yehoshua’s daughters like her own and they built a vibrant Jewish family in Israel.

Rachel and her husband eventually made her way to the United States where Rachel lives today, surrounded by her children, grandchildren and great-grandchildren. For decades Rachel's coat with the identifying initials was kept in the family, until it was completely worn out. She has a picture of her grandmother – and namesake – displayed prominently in her dining room, “Tzu darmonen as deh gantzeh leben is a cholim – To remind us that all of life is a dream.”

*The last name has been changed at the request of the family. I heard the story directly from Rachel’s son, a good friend of mine.

A Jew in a Jesuit School
Blessing on Chewing Gum
Was Rahab a Prostitute?
Extras In Our Own Epic
Comments
MOST POPULAR IN Spirituality
Our privacy policy