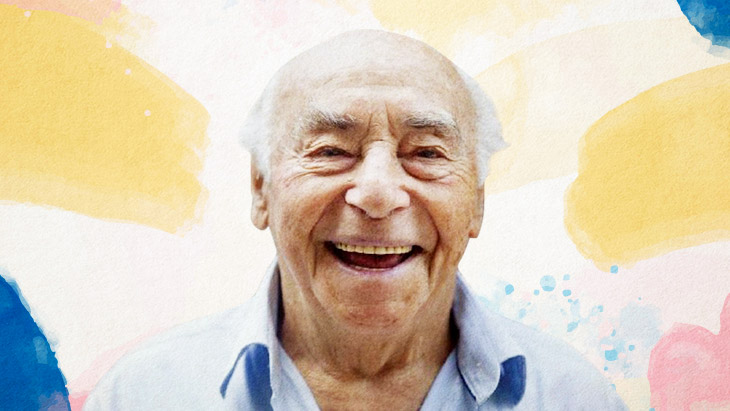 A beacon of hope during the Nazi occupation, the orphanage directed by Dr Januscz Korczak was built on the pioneering ideas of respecting and empowering every child.

Janusz Korczak, a specialist in children’s medicine who wrote over 20 books advocating for children’s rights for respect, founded and directed a Jewish orphanage in Warsaw that became famous throughout Europe for its pioneering ideas empowering children to maximize their potential.

Last month, the last surviving member of the orphanage, painter and sculptor Itzchak Belfer, died in Tel Aviv at aged 98. He had dedicated much of his life to preserving the memory of the man who had given him hope and believed in him as a child. Belfer’s granddaughter Neta said her grandfather had lived according to the values he had learned from Korzcak, and described him as “the most optimistic person I have ever met.” 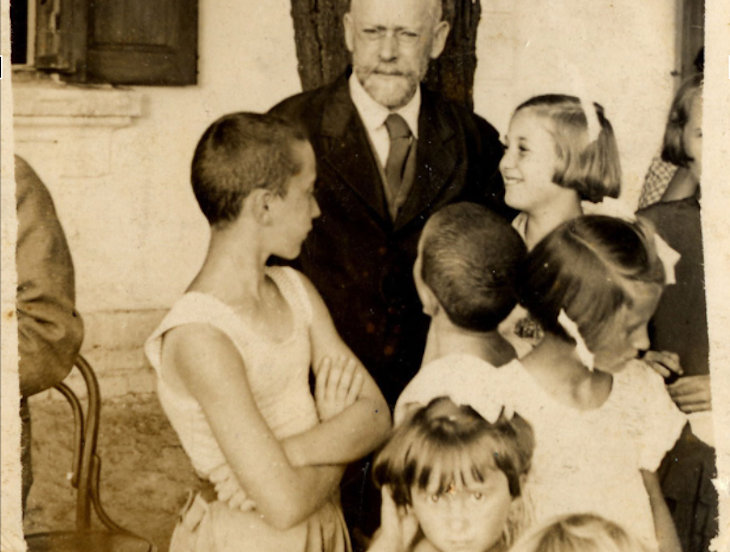 Janusz Korczak with children at the ‘Dom Sierot’ – Orphanage in Warsaw

“Children are not only the people of tomorrow, they are entitled to be taken seriously today”, Korzcak wrote. “They have a right to be treated by adults with tenderness and respect and should be allowed to grow into whoever they were meant to be – the unknown person inside each of them is the hope for the future.”

In 1940, Korzcak’s orphanage was forced to move to the Warsaw Ghetto, and in 1942 he was sent to his death along with all of its children and staff. An icon for hope in the face of darkness, Korzcak dedicated his life to bettering the life of his children even when his own health failed. In a sign of defiance to the Nazis when they occupied Poland, always looking to inspire the children to live with values, he refused to wear a blue star on his arm showing his disdain for those who would discriminate and disrespect others.

“You will stay here, I will go home”

Itzchak Belfer was born in April 1923 to a religious Jewish family in Warsaw and was one of six children. His father was a poor merchant who also served as the tzedaka (charity) collector in his synagogue.

His father died when he was four and Itzchak’s mother struggled to provide for her children. In 1930, she approached Janusz Korczak to take in her son to live in the orphanage and go to school there. 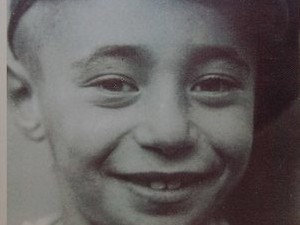 Itzchak Belfer as a young boy

“Things were very cramped at home, we lived with my grandmother and grandfather, there was no room to play, and my mother saw that my studies were falling," Belfer told an audience of Israeli schoolchildren in 2006. "‘Itzchakele, we are going to see a house’," he recalled his mother telling him as she led him across the city.

“My mother left me and I stayed behind in the Garden of Eden."

Belfer lived at the orphanage for seven years and would visit his mother and family every Friday morning. Korzcak, along with Stefania (Stefa) Wilczyńska, the house mother, created a haven for hundreds of children, empowering them with values of responsibility and respect. The orphanage had its own parliament, court and newspaper, and each child had individual responsibilities.

“We had a large library about the world and under it there were 107 small drawers, one for each child.” He added, “Every child had value, had a place with their own name, their own world.” 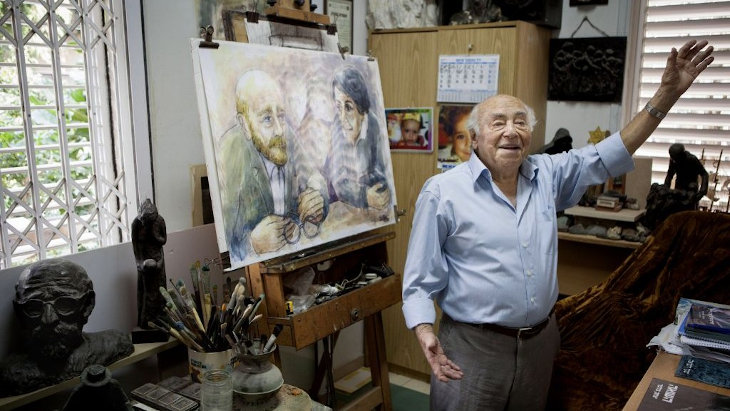 At his home in Tel Aviv, Itzchak Belfer’s talent for drawing was first spotted at Korczak's orphanage.

“Dare to dream,” Korzcak would tell his children. “Something will always come of it.”

Belfer enjoyed drawing as a child and was amazed when Stefa asked to speak with him. “Yitzhakele, I know you love to draw," she said. “I will buy you paper, colors and paints, and after lessons when you are free, you can sit and paint in the little room over there.” He was nine years old at the time.

“There was no one happier,” Belfer said. “That’s how I started my career. Those moments painting were so precious to me as well as I would also have some time on my own to think." 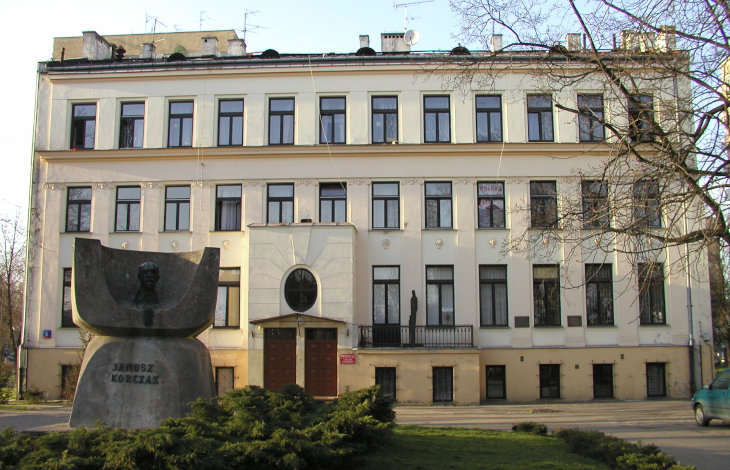 The orphanage building today in Warsaw, where a monument stands in memory of Janusz Korzcak.

“Korczak always led by example,” Belfer said. “Rather than use force, he would use respect.”

When staff would regularly weigh the children to make sure they were not malnourished Korzcak had a unique way to ensure the children would stay healthy and well.

“Those children who were too thin would be given a cup of cod liver oil with their name to drink. I drank it for many years,” Belfer said. “It was really not very nice to drink, but Korzcak stood near the table and when there were those children who refused, he would take a little bread, close his eyes drink a cup of oil and eat the bread. This way he would teach us how to overcome difficult things in life.” 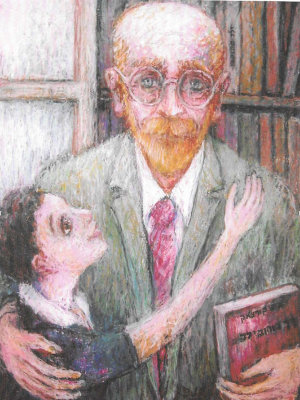 At the age of 15, in 1938, Itzchak graduated and returned to his family to help support them financially. He continued to visit the orphanage as a volunteer, helping the younger children.

Then the Nazi forces conquered Poland in 1939. Itzchak and a friend decided to leave Poland to join the Soviets to fight against the Nazis. Before he left, he went to say goodbye to Korczak.

"It was a difficult moment. Korczak took out all of the money he carried in his pockets and gave it to us. We received his blessing and fled."

Fleeing to Belorussia, the pair reached a refugee camp in Malkini and Itzchak was later sent to forced labor in coal mines in the Urals. In 1941, he migrated to Tashkent where he was drafted to the Red Army and was stationed in one of the cavalry regiments. When the battalion was disarmed Itzchak was sent to work in a factory until the war ended. 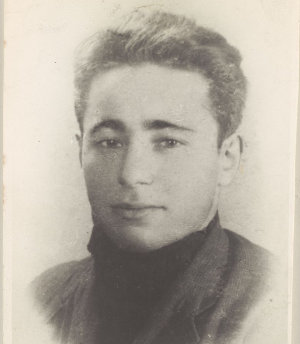 Belfer reached Israel in 1949 after being detained by the British in Cyprus.

In 1946, after the war, Belfer returned to Poland in search of his mother, grandparents and siblings and found Warsaw in ruins. He found no trace of his family and the orphanage lay empty.

Once a third of Warsaw’s population, the city’s Jewish community had been decimated. Of the 400,000 Jews the Nazis had crammed into the ghetto, barely any remained. On August 5 1942, after he had declined multiple offers to avoid deportation, insisting he would not leave his children, Janusz Korzcak had led the 200 children of their orphanage through the streets of Warsaw to the deportation meeting point – their heads held high and singing as he continued to shield them from the bitter fate that awaited them. From there they were taken by train to the gas chambers at the Treblinka death camp. 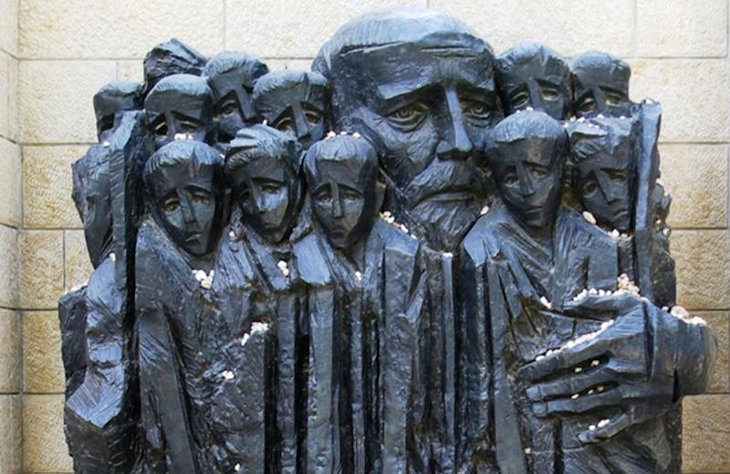 The sole surviving member of his family, Itzchak Belfer left Poland to Czechoslovakia, then Austria and finally to Genoa, Italy where he met a member of the Jewish Agency who was calling for Jews to emigrate to Israel.

Embarking on the ship, Af Al Pi Chen, (Despite all of this) Belfer was interned by the British in a detainee camp in Cyprus in 1947 where he met and studied with future renowned Israeli artist and sculptor Ze’ev Ben Zvi. In 1949, he finally reached Israel, where he was drafted and served as a soldier for two years. In 1961, aged 39, Belfer married Rosa, an immigrant from Morocco and a year later Haim, his only child, was born. 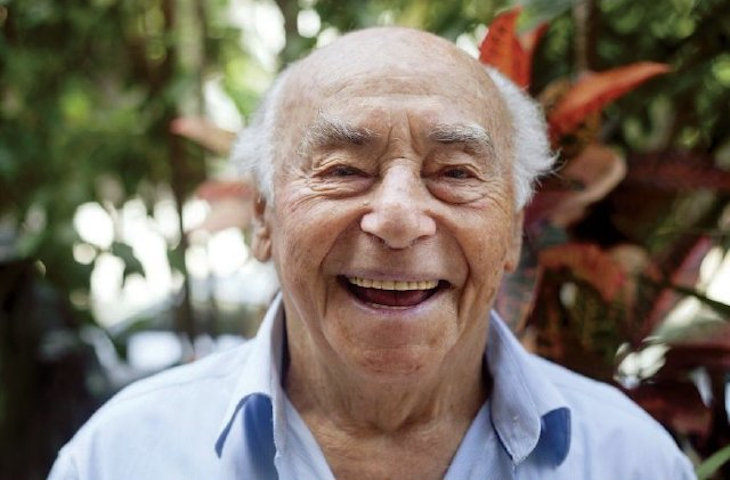 Always positive about life, Itzchak Belfer was the last of Janusz Korzcak's orphans.

Studying at the Avni Institute for Art and Design, where later he also taught painting, Itzchak Belfer began a distinguished career as an artist. Much of his work preserves the world that he lost, and the treasured memories he had of Korczak. His Tel Aviv apartment was filled with artwork bearing Korczak’s image. For 30 years he only produced artwork in black and white, until his wife convinced him to paint in color and expand his repertoire and start to bring to life the beauty of the Land of Israel. He said “I live a good life, a happy life with the love of life and the love of my family around me.”

Belfer’s works have been displayed in numerous exhibitions in Israel and internationally. One sculpture which stands in the city of Günzburg, Germany depicts Korzcak surrounded by a group of his children.

Korzcak’s beliefs about respect, responsibility and positivity never left Belfer, who volunteered his time, well into his nineties, teaching drawing classes for Tel Aviv municipality workers and their families. Known for his love of life, broad smile and appreciation for all that he had, in 2016, he published an animated children’s book, “The Man Who Knew How to Love Children,” about his experiences in Korczak’s orphanage.

“I feel a responsibility to talk about his memory, about the orphanage and about the miraculous educational environment that I was lucky to be a part of,” he said when the book was published. “It was home, and in many ways it still is.”

A devoted grandfather, Belfer also embodied the values Korzcak taught him as a child. “He would always ask me what I thought about things and would encourage me to stand up for myself and have an opinion of my own,” his granddaughter Neta told Aish.com.

“When I was two years old, he brought me painting equipment and set up a place for me in his studio for me to paint if I ever wanted. I played the piano and he always encouraged me in this as well.”

“I think his life is a unique and rare example of living an amazing life despite all of the difficulties. Even though he went through the worst nightmares you can imagine, he was the most optimistic person I ever met.”