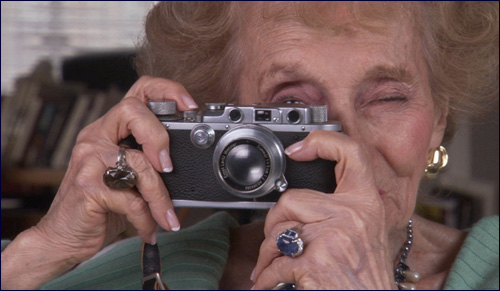 Ruth Gruber, the journalist, author and activist, has died at the age of 105.

In a career spanning decades, Ruth Gruber wrote 19 books and countless newspaper and magazine articles. She took on top-secret missions, saved hundreds of lives, and was honored and feted on three continents. Her words and images moved governments to change policy. One of the most accomplished journalists of the 20th century, Ms. Gruber had one overriding goal: to tell the world the Jewish story. “Whenever I saw that Jews were in danger,” she explained, “I covered that story.”

“I had two tools to fight injustice - my typewriter and my camera.” Those tools remained her weapons all her life.

While in Germany, Ms. Gruber got to know the country’s Jews and witnessed the growing threat against them. In her 1992 memoir Ahead of Time: My Early Years as a Foreign Correspondent, Ms. Gruber recalled sitting in the front row of a rally, listening to Adolf Hitler. He “rant(ed) against the Weimar Republic, against capitalists and communists, against America, against Jews. His audience shrieked with approval, their hysteria matching his. ‘Juda verecke (May the Jew croak)’ he shouted, ‘Juda verecke’”. 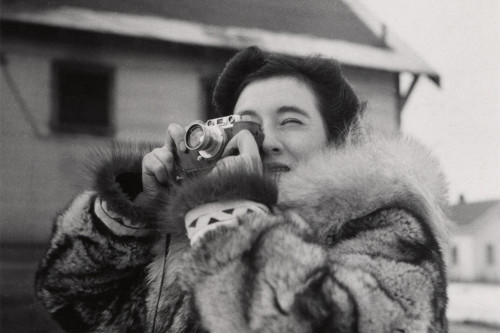 Returning home, Ms. Gruber worked as a journalist, then received a Guggenheim grant to study women living in different political systems. As she was preparing to depart for the Soviet Union, the New York Herald Tribune asked her to contribute to a series on women in the Soviet Union. Once in the USSR, Ms. Gruber didn’t limit herself to writing about women; she travelled into the Arctic Circle and visited a Siberian gulag, interviewing political and other prisoners and telling their compelling stories. Along the way, she taught herself photography and took pictures to accompany her articles. “I had two tools to fight injustice - words and images, my typewriter and my camera,” she later recalled. Those tools would remain her weapons all her life.

Her writing so impressed US Interior Secretary Harold Ickes that he appointed Ms. Gruber field representative to the Alaskan Territory in 1941, charged with investigating areas to settle GIs. Three years later, Sec. Ickes had a much more dangerous assignment for Ms. Gruber, one that would determine the course of the rest of her life. President Roosevelt intended to bring nearly 1,000 Jewish refugees from 19 Nazi-occupied countries to the United States, and Sec. Ickes chose Ms. Gruber to accompany them, skirting German U-boats on the treacherous Atlantic crossing.

“You’re going to be given the rank of simulated general,” Sec. Ickes told her. “If you’re shot down and the Nazis capture you as a civilian, they can kill you as a spy. But as a general, according to the Geneva Convention, they have to give you food and shelter and keep you alive.” The refugees would need Ms. Gruber to escort them, Sec. Ickes told her, saying she should metaphorically “hold their hand” during the journey.

Ms. Gruber was determined that Americans “learn the truth of Hitler’s crimes”.

Ms. Gruber accepted her mission and during the crossing interviewed the traumatized refugees. At first, she recalled “Some of the men said, ‘We can’t tell you what we went through, it’s too obscene. You’re a young woman!’” Ms. Gruber recalled her answer: “I said, ‘Forget I’m a woman, you are the first witnesses coming to America’. So they talked. Nobody refused to talk.” Ms. Gruber was determined that Americans “learn the truth of Hitler’s crimes”. 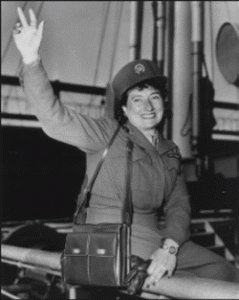 She listened over and over on the journey to the refugees’ stories, until her tears wiped away the words she was writing in her notebooks and she had to take a break and start over. She organized English lessons, nursed the sick, and taught the refugees songs in English. She became so identified with the refugees that they started calling her, still a young woman, “Mother Ruth”. By the time the refugees arrived in New York, the only group of Jewish refugees taken in by the United States during World War II, Ms. Gruber knew that her career would be telling her fellow Jews’ stories. 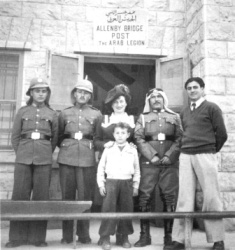 The Arab Legion post at the Allenby Bridge, 1946. Gruber was the first journalist to enter the newly-established Hashemite Kingdom of Jordan

Three years later, in 1947, Ms. Gruber was covering a UN conference in Jerusalem when she heard that The Exodus, a ramshackle Chesapeake Bay steamer, bought by the Haganah (the forerunner of Israel’s modern-day army) and overloaded with 4,515 desperate Jewish Holocaust survivors, had been intercepted by British warships in Haifa Bay. She raced to Haifa and watched as British soldiers carried down the bodies of three Jews they had killed while stopping the ship. 120 Jewish survivors were injured in the British attack.

The British transferred the Jews to three prison ships and sent them back to Germany, where they would be interned once more in camps. Ms. Gruber became the pool correspondent, the sole journalist charged with sending articles and photographs to news organizations in the United States, from the Exodus. She followed the Jews on one prison ship, Runnymede Park, and her chronicles of those ragged Jews’ agony moved the world. Her photo of the British flag painted over with a swastika became Life magazine’s Picture of the Week, and her book Exodus 1947: The Ship that Launched a Nation inspired Leon Uris’ bestselling novel Exodus and the 1960 movie based on it.

Ms. Gruber covered some of the most important moments in Israeli and Jewish history, reporting for the New York Herald Tribune, The New York Post and The New York Times on the founding of the State of Israel, its war of independence, and the Nuremberg war-crimes trials in Germany. In 1952, she led Eleanor Roosevelt on an official tour of Israel. She also lived a busy life in New York, working and speaking. She was married twice, first to Philip Michaels, a lawyer, and after his death, to Henry Rosner, an official with New York’s social service agencies.

“I just felt that I had to fight evil, and felt like that since I was 20 years old.”

In 1985, at the age of 75, Ms. Gruber travelled to remote Jewish communities in Ethiopia, and was the only foreign correspondent present at Operation Moses, the dramatic 1985 Israeli airlift of thousands of Ethiopian Jews, fleeing danger and famine in Ethiopia, to Israel. She wrote about the experience in an acclaimed book, Rescue: The Exodus of the Ethiopian Jews. Detailing the Ethiopian Jews’ rich culture and history, and their persecution in Ethiopia, Ms. Gruber concluded “The only way to preserve that tradition was to lift them out of Ethiopia and to get them into Israel.” 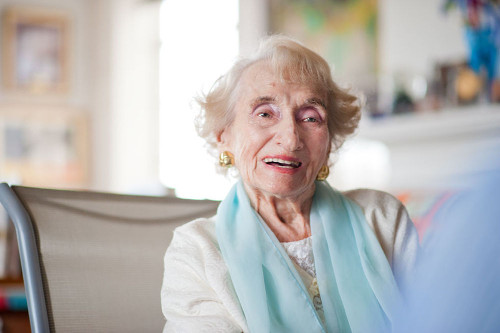 Chronicling the fate of Jews through the 20th century, Ruth Gruber wrote time and again of Jews moving from danger to safety, from zones of war and danger to refuge, sometimes in the United States, and often in Israel. Ms. Gruber covered many other stories and wrote compelling books on many topics, but the one burning issue to which she returned again and again was the survival of the Jewish people.

More than a journalist, Ms. Gruber experienced the anguish and triumphs she wrote about, along with her fellow Jews. “I just felt that I had to fight evil, and felt like that since I was 20 years old,” Ms. Gruber explained in 2001. “And I’ve never been an observer. I have to live a story to write it.”

Torah and the Mormon Snowboarder

Upside-Down World
Scientific Curiosity and the Divine Encounter
Mind Over Milkshakes
Love the Convert
Comments
MOST POPULAR IN Israel
Our privacy policy
Aish.com Is Looking for Great Writers