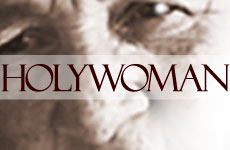 An encounter with a hidden Jewish holy woman turns the world of a devotee to Eastern religions upside down.

I was in Israel, hot on the trail of a hidden holywoman.

I had only an address and a name -- Rebbetzin Devorah Cohen. Her husband, Rabbi Emanuel Cohen, was considered by Israel's greatest rabbis to be one of the 36 hidden tzaddikim by whose merit the whole world exists. "Rebbetzin Devorah is as great as he is," my source had told me.

As the bus pulled out of Jerusalem's Central Bus Station, I settled in for a long ride, grateful for the time to think. I had been in Israel for barely two months, studying about my Jewish background. Having spent the last 15 years living in an Indian ashram, I had many unresolved issues with Judaism.

My major obstacle, which I called, "Issue Number One," was accepting the Jewish emphasis on having children.

For 15 years I had invested myself in a celibate path, believing that sexual relationships dissipated spiritual energy.

For 15 years I had invested myself in a celibate path, having been taught by my Guru that sexual relationships dissipated spiritual energy and that children were little noisemakers who made it impossible to meditate. I believed that children and spiritual practices were mutually exclusive, and that if I pursued the path of Judaism, all my spirituality would end up in the diaper pail.

My "Issue Number Two" was a sense a spiritual alienation from most of the other Jews I met in Israel. Although I was convinced that Torah was true, I felt that it applied to "them," but not to me. I was a exception.

THE HOLOCAUST AND AFTER

When I finally alighted at Rebbetzin Devorah's ramshackle rural community, I made my way to the home of Nomi, who had arranged the meeting.

She filled me in on Rebbetzin Devorah's life. Born in Hungary, she had been taken to Auschwitz at the age of 20. Her parents and sisters were killed in the gas chambers the first night, but the young Devorah had been kept alive to be experimented upon by the notorious "angel of death," Dr. Mengele.

Right after the war, she made her way to Palestine, where she married Emanuel Cohen, also a survivor. The couple never had any children, although they raised many unwanted children who were left on their doorstep, including one Downs Syndrome boy who, 30 years later, was still living with them. They lived in abject poverty, eking out a meager income from raising poultry.

"Through it all," Nomi concluded, shaking her head in wonder, "Rebbetzin Devorah is always smiling. I see her almost every day, and she is never without a smile. I still can't figure out what she has to smile about."

On Shabbat morning, I attended the service at the community's simple synagogue. Suddenly the door swung open, and a woman walked toward me, smiling broadly, her arms outstretched. She greeted me with a bear hug, like a long-lost daughter. I knew immediately that this was Rebbetzin Devorah.

As I stared at her, she took my new prayer book from my hand. She leafed through it until she found the "Ethics of Our Fathers," aphorisms by the sages of two millennia ago. Handing the prayer book back to me, she pointed to a passage, and asked, "Have you ever seen this one?"

As I read the words she was pointing to, I broke out in goosebumps.

As I read the words she was pointing to, I broke out in goosebumps. Here was a rejoinder to my Issue Number One: "Rabbi Shimon ben Yehudah says... Beauty, strength, wealth, honor, wisdom ... and children -- these befit the righteous and befit the world ..."

While I stood there dumbfounded, she took my prayer book again and turned a few pages. Handing it back to me, she pointed to another passage and asked, "And have you ever read this one?"

Staring at me were the words: "Hillel said -- Do not separate yourself from the community." Issue Number Two in stark rebuttal.

I looked up in consternation. The holywoman laughed, then turned and left.

THROUGH THE LOOKING GLASS

Later that afternoon, I followed Nomi's directions to Rebbetzin Devorah's home, which looked like a shack from some Hassidic story. I came upon Rebbetzin Devorah as she was setting out a dish of food for the stray cats. She greeted me with a beaming smile and invited me in. Soon we were engrossed in conversation. We spoke Hebrew, a language which I barely knew, but somehow I understood everything she said.

She asked me about my background. I told her about the ashram. Then I asked her about her experiences in the Holocaust, a subject which had always absorbed me. She described how, on that first night in Auschwitz, a veteran inmate had pointed to the smoke issuing out of the chimney of the crematoria and told her, "That's your parents."

Nevertheless, she asserted, "Auschwitz was not a bad place."

What? I must have misunderstood. I asked her to repeat her statement.

"Auschwitz was not a bad place," she repeated clearly. "There was a group of religious Hungarian girls. We stuck together. And all the mitzvot we could do, we did do. For example, one girl kept track of the days, so we knew when it was Shabbos, and we avoided doing any forbidden work whenever possible. On Passover, we didn't have any matzah or wine, of course. But one of the girls had memorized the Haggadah. She would recite a line, then we would all repeat after her. In this way, we were able to fulfill the mitzvah of reciting the Haggadah."

The holywoman fixed me with her pale blue eyes. "A bad place is a place where Jews can do mitzvot, but don't do them. For you, the ashram was a bad place."

She had just turned my whole reality upside down -- a bad place had nothing to do with bad things happening to you.

She had just turned my whole reality upside down. A bad place had nothing to do with bad things happening to you. No matter that the Nazis had murdered her whole family. No matter that Dr. Mengele had experimented on her and probably sterilized her. All that really matters is what issues from you. No wonder she was always smiling, despite her barrenness, despite her poverty, despite the grueling hardship of her daily life. She was performing mitzvot. She was bonding with God. She was projecting her own light even in the darkness of hell.

I had met many holy masters in India. I had sat at the feet of great swamis and had bowed before Anandamaya-ma, the woman considered by millions to be the incarnation of the Divine Mother. But sitting in that bare room with its tin roof, eating cucumbers and farmer's cheese across a rickety table from Rebbetzin Devorah, I felt like I had just emerged from a whole lifetime spent through the looking glass. I had been seeing everything in reverse. Now here I was at the top of the rabbit hole, awakened from the dream, squinting my eyes at the brightness of a world of total spiritual clarity.

I looked long and hard at Rebbetzin Devorah. She gazed back at me, and laughed.

[All names and places in this article have been changed in order to protect the holywoman's hiddenness, a condition for her allowing me to write about her.]

One Drink Too Many: My Journey to Letting Go of Alcohol, Finding Freedom and Choosing Happiness
Take Two: Why Pesach Sheini is Significant to Our Family
Why Really Everyone Believes in Free Will
Who was Two-Gun Cohen?
Should Jews Support Ukraine?
The Jews of Cuba
Comments
MOST POPULAR IN Spiritual Odysseys
Our privacy policy