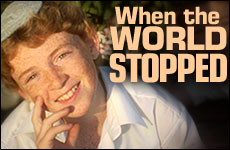 My 12-year-old son had cancer.

A couple of weeks earlier, a CT scan had revealed a golf-ball growth pressing on Gilad's small intestine. This had completely blocked the passages, causing him to lose about 15 lbs in 12 days and vomit anything he tried to eat.

We were thankful they'd found the problem early and were comforted by the surgeon and some other doctors. They said it was highly unlikely the pathology results would show anything untoward.

On the Wednesday after Sukkot, we were summoned to the Pediatric Hema-Oncology Department at Hadassah Hospital Ein Karem, where we were informed of the pathology results: Stage 3 abdominal Burkitt's Lymphoma.

The Head of Department was matter-of-fact, reassuring and sensitive. We came out of there so determined and hopeful there was no time to feel shocked and depressed.

Burkitt's, although a very aggressive form of non-Hodgkin's lymphoma, is very curable. But because it spreads quickly, we had no time to lose. 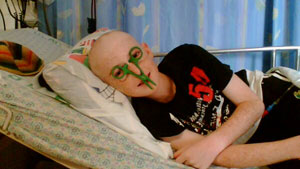 The next day we were already back there for an operation to implant a Hickman Line into Gilad's body (a device making it easier to take blood and administer chemotherapy), with the first round of chemo to start on Sunday.

I'm not going to tell you cancer was the best thing that happened to us. Gilad went through a lot of pain and torture. Thank God he's in full recovery now, but it's still too early to say how it's affected our lives.

It did teach us though to look at life with different eyes.

The question of "Why?" never really entered our minds. Apart from the urgency of the whole thing, it was clear to us the Almighty knew what He was doing. There are just some things we're not meant to understand.

Still, seeing your kid suffer is always a tough one.

No room for complacency. Plenty of room for God.

It's important not to generalize with cancer. Every child and every case is different.
The common denominator is everyone has to go through their little hell. With us, we knew there were very high back-to-complete-health rates. That took a lot of the stress away. It wasn't life and death. We just knew we had to go through the long and dark tunnel to get to the light at the other side.

Having said that, there was no room for complacency.

Plenty of room for God.

And here's just some of what He taught me:

We saw a lot of life and death in the time we were in the hospital, so we knew we were very 'lucky.' Kids born with leukemia going through two years of treatment that might not work, kids with cancer for the second, third or fourth time, endless pain and suffering...and death.

Getting through this was our priority. We didn't appreciate what 'aggressive treatment' meant until we spent almost three consecutive months in the hospital, 24-7 with my wife and I rotating shifts. That became our full-time job.

Thank God, we had financial help, help with the kids and help with everything else. Our community was absolutely amazing. Over 50 women cooked meals for us during that time -- I've never eaten so well in my life! Someone did our shopping every week and people even came in to do laundry and wash the dishes.

Once we realize the Almighty is taking care of our health, wealth and daily maintenance every second of the day, we have no worries.

That's what the IV drip showed me.

I spent hours next to that thing so I can impersonate all the noises -- when the bag's finished, when air gets caught in the tubes or the battery's running low.

But every drip and every drop... is life.

Even though the doctors know the treatment for this particular form of Burkitt's, you still have to pray every drop flows exactly to the right spot; every single cell in your child's body reacts as it should and every nurse does exactly the right thing at the right time. Any minor error in dosage could be critical.

"Every breath you take, every move you make...I'll be watching you." (Police)

The Almighty gives us life with every breath we take. But we take it for granted.

The Almighty gives us life with every breath we take. But we take it for granted. Who says that because you can read this word, you'll be able to read this one... this one... and this one.

That's not always the case.

Bonus lesson from the incessant drip: we can only achieve great things in little steps -- small, consistent efforts every day.

Lesson #3 People Want to Give

We were exposed to overflowing goodness and unlimited giving. From family and friends to complete strangers just turning up to be with us or give Gilad a word of encouragement.

Someone brought us two pots of Ben and Jerry's at two in the morning... a friend drove four hours just to play Scrabble with me in the hospital... a famous rabbi cried over the phone... a friend set up a Facebook group to pray for Gilad's recovery. Almost 4,000 Jews joined! Prayers were said all over the world...Tehillim groups...no gossip commitments...good deeds clubs...and who knows what else!

One of our greatest tests is knowing how to receive. Often, people want to give more than you need to receive and you've just got to let them. Be prepared to receive any help, whether physical or emotional, whether direct or indirect; simply, with gratitude and a pleasant countenance...

Be ready to deal sensitively with all the embarrassments of people who wanted to help but didn't know how...

Even make up things they can do for you!

Not because you need it. Because they do.

And then you blur the difference between giving and receiving.

The second lesson is that all this human kindness is just a shimmering reflection of the Almighty's unbounded, incomprehensible Goodness.

Just count the blessings in your life -- you're alive, you're healthy, you have eyes, ears, legs and arms, children, a family, a house, a car, a job etc. etc. And what have you done to deserve all of this?

He gives. No limits. No conditions.

Just before we started the chemo, a wise man gave us two important pieces of advice:

1. Do not cry in front of your child.
2. Dress your best when you come to the hospital.

Just because you're having a bad day doesn't mean everyone else has to suffer.

We actually learn this from Abraham, who with his wife Sarah lying dead before him, respectfully and politely negotiated with the wily Efron before buying the Cave of Machpela as a burial site.

Lesson #5: You're Not in Charge

My wife and I thought we were in some long and never-ending movie. Full of surprises, twists and turns; anything we tried to plan just didn't happen.

Gilad was at home in between treatments and he was fine. For the first time in three months my wife and I could go out together.

It was the wedding of the daughter of some good friends, an hour or so away. We were looking forward to seeing everyone and taking a break from hospitals and wheelchairs for a while.

We parked the car and walked to the entrance to the hall. At the door, my daughter called us saying Gilad had a temperature and was vomiting all over the place.

We managed a quick hug and a "Mazel tov," and drove straight back to the hospital.

It was a crazy time. There was a week when both Gilad and my father were in the same hospital. My dad was here on a visit, slipped and broke his hip.

My grandmother passed away.

And as everything was going smoothly, Gilad suddenly doubled up in pain, collapsing in agony while holding his stomach.

The doctors were worried. They sent him for another CT he could barely stand up for.
We thought he'd have to have another major stomach operation.

God's in the driving seat. Enjoy the ride.

But after a few hours the pain miraculously disappeared and we moved on to the next scene in the plot.

The point is clear. God's in the driving seat. Enjoy the ride.

My wife and I were at Gilad's side 24 hours a day, 7 days a week. It took a few weeks for him to get used to his 12 year-old's independence after finishing chemo, but I'm sure this gave him tremendous security and confidence during his stay in hospital.

The Almighty is our parent and He too is with us 24/7, during the good times as well as the bad.

These things are designed to bring out the best in you... if you're prepared to let Him help you.

Having your world stop may not be such a bad thing after all.

In fact, that's why we have Shabbat.

So this Shabbat stop the world and think about God. Thank Him for everything you have.

The Jewish Hero of the Ukrainian Uprising