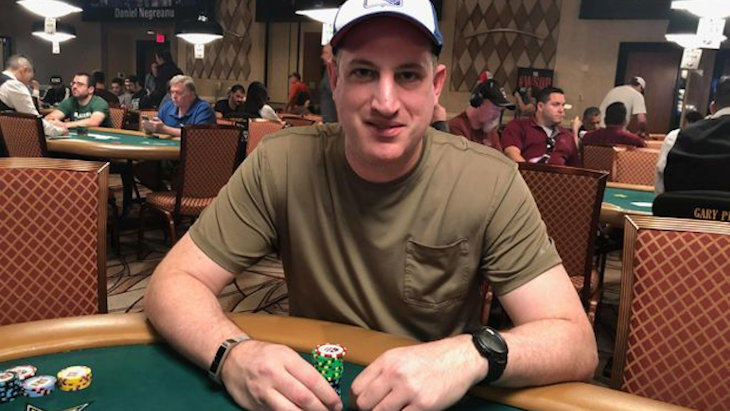 Gershon Distenfeld is donating over $125,000 after playing in the World Series of Poker Main Event.

Each year the World Series of Poker (WSOP) Main Event final table brings together the top nine poker players from across the United States to compete in Las Vegas. This year’s final game took place December 28, 2020. Among the competitors was Gershon Distenfeld, an Orthodox Jew from New Jersey, who came in eighth place and is donating his entire prize – $125,885 – to charity.

In a pre-game interview, one journalist noted that while it’s common for some top poker players to donate a portion of their winnings to charity, giving away the entirety of their prize money is previously unheard of.

Yet for Gershon, and his wife Aviva, giving tzedakah, funds to charity, is a way of life. In an interview with Aish.com. Gershon recently explained his decision to donate his winnings.

“I was fortunate to have grown up in a warm and chesed-oriented modern Orthodox community,” Gershon notes, using the Hebrew word chesed, which means acts of generosity and loving kindness to others. Gershon earned a degree in Finance from Yeshiva University and works as co-head of Fixed Income and Director of Credit at AllianceBernstein. He also appears frequently on CNBC and Bloomberg TV where he recently made his public announcement that after years of poker playing, he’d finally qualified to compete in the WSOP’s top poker championship.

For years, poker was a hobby for Gershon. He spent time reading and studying about poker, then began playing the game. Gershon notes that his rabbi has been supportive of his playing poker as a hobby. He consulted his rabbi about the permissibility of playing this tournament. He explained that "the nature of how the WSOP tournament is structured, and the way the funds are organized, avoids the questions that Jewish scholars have raised concerning forms of gambling for rmoney that are prohibited in Jewish law."

Pico-Robertson: Story of a Torah Boomtown

Paris, When It Sizzles With Hate
The Softball Player
How This 6 Generation Bread Baker Brought Back Israel’s Ancient Grains
Olivia Newton John’s Grandfather was a Nobel-Prize Winning Jewish Physicist
Comments
MOST POPULAR IN Israel
Our privacy policy
Aish.com Is Looking for Great Writers