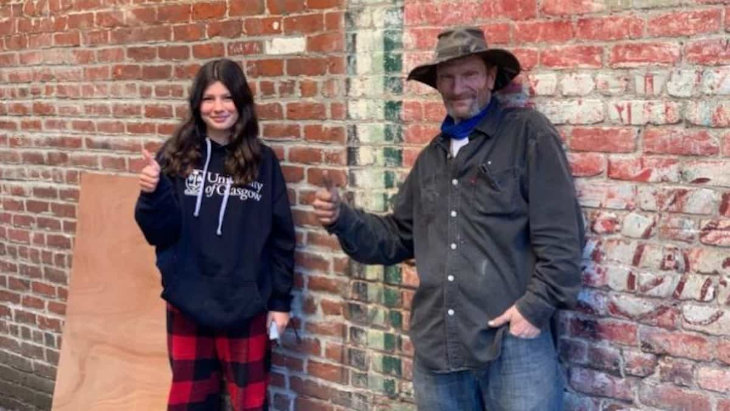 A homeless stranger went out of his way to return a grandmother's wallet. Little did he know what would happen next.

In Jewish tradition, a mitzvah is a good deed that’s performed with a good heart simply because it’s the right thing to do. And that’s just how Evelyn Topper described the kind act of a homeless stranger who’d gone out of his way to return her lost wallet.

Topper likely dropped the wallet when she and her granddaughter, Mikayla Gounard, were leaving a local coffee shop in San Rafael, California that they’d just patronized, but Topper didn’t realize it was missing until she got home. With her credit, debit, and medical cards gone, she was understandably upset.

The next day, however, Topper got a call that put her worries to rest.

Sean Curry had found the wallet in a dumpster behind the coffee shop. Except for the cash, its contents were intact. Even though he’d been homeless for five years, rather than take advantage, Curry reached out to make arrangements to return Topper’s property.

While Topper lauded his behavior and declared it a mitzvah, Curry didn’t believe he’d done anything out of the ordinary. He’d done it, he explained in an interview with NBC, because he “[had] a heart” and “that’s the way I was brought up.”

While a true mitzvah is performed without expectation of recognition or reward, sometimes the powers that be – with the help of a determined young girl – take matters into their own hands.

Mikayla Gounard had already planned a socially distant “drive-by” party for her upcoming 12th birthday. Rather than presents, she’d decided to ask for contributions to be donated to charity in her name.

Gounard hadn’t yet chosen which charity the money would go to, but after learning more about the man who’d so selflessly returned her grandmother’s wallet, the choice seemed obvious.

It was Gounard’s turn to set her own mitzvah in motion. On the day of her party, the newly-minted 12-year-old placed a photo of Curry and a collection basket next to balloons and party favors on an outdoor table in her driveway. By the end of her “Happy Birthday!” processional, she’d raised several hundred dollars.

When Gounard and her mom met up with Curry the next day to give him the money, he admitted to feeling truly humbled by the heartwarming gesture.

Rather than merely giving lip service to the idea that “one good turn deserves another,” like Curry, Gounard chose to make that good turn happen – because she knew it was the right thing to do.

“I think it’s really important because there are people who think that once you got pushed down you can never get back up again,” Gounard said.

We think so too.

Since people were still asking how they could help, Mikayla and her mother Vanessa set up a GoFundMe page, with a goal of raising enough money to get Currey "off of the streets and into a temporary housing situation that keeps him safe and warm." Almost $50,000 has been raised to date.

With the additional money, the pair hope to partner with Currey "to create a sustainable row of tiny houses for the San Rafael homeless community at large, using his design and construction experience," according to the GoFundMe.

Watch the video of this story from NBC Bay Area below:

Courtesy of Good News Network – for more good news from around the world visit GNN.org

The Golden Rule
Is Grease the Word?
Dried Fruit Compote
Scientific Curiosity and the Divine Encounter
Comments
MOST POPULAR IN Current Issues
Our privacy policy
Aish.com Is Looking for Great Writers