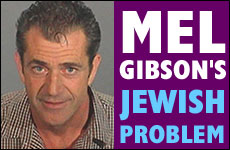 Based on my previous interviews with the Gibson family, nothing Mel said comes as a surprise.

NEW YORK, NY August 1, 2006: I exclusively interviewed Mel Gibson's father, Hutton Gibson, three times during a highly charged time in the United States, just one week prior to the launch of The Passion in February 2004. This is why I can state emphatically that the hoopla surrounding Mel Gibson's comments comes as a bit of an anti-climax.

When Mel defiantly expressed to the world during an interview with Dianne Sawyer on February 16, 2004, that the integrity and morality of his father was sacrosanct - even though the octogenarian was a notorious longtime Holocaust denier - he cast his lot with the callous philosophy his father discharges.

Mel had every opportunity to walk the proper path without compromising his father-son bond: denounce the abhorrent views of the father while continuing to affirm his birthright love for him.

Mel's character reveals much about a troubled family obsessed with demonizing another faith. He was reared in a family whose patriarch has spent his life discrediting others dissimilar to him. Whether through his father's monthly newsletters or media interviews, you were either for Latin Mass and against the "looming world Jewish domination," or against God.

That is why I repeated over and again on the talk-show circuit that Mel's drink-and-tell-all anti-Jewish revelation would only be a matter of time in the making. And what was perhaps most fascinating about his tirade this past Saturday evening, was his word-for-word parroting of his father. In Mel's rage he feared that the policeman was Jewish and claimed that Jews were the source of all wars. Well, like father like son. Hutton stated to me that WWI & WWII were waged as part of a Jewish plot, that in fact every war was orchestrated by the Jewish bankers and corporate magnates to reap financial gain at the expense of the Christian.

In my discussions with Hutton, I was actually most interested in what was his children thought of his philosophy and worldview. He proudly confirmed that the "first generation" - referring to his ten adult kids - resoundingly supported his perspective regarding the Holocaust et al. One of the pillars of his outlook that he chose to share with me include: "I don't know what the Jewish agenda is except that it's all about control. They're after one world religion and one world government."

And when asked during a Readers Digest exclusive if the Holocaust was a ly Jewish experience, it was as if pulling teeth when Mel replied that there were "some Jews killed."

And what about future Gibsons? It was the next generation - the grandkids - who Hutton Gibson was most concerned about, that they may not carry forth his call to arms as resolutely. Unfortunately, he has little need to worry just yet, as this trans-generational cycle of hate is alive and well in the Gibson family. I had interviewed Mel's nephew as well, seventeen-year-old Tiernan Gibson, who is the son of Hutton's Houston-based daughter. He was as absolute in his Holocaust denial as his grandfather. His enlightened "education" about the murder of six million Jews came at the Latin mass only St. Jude's Shrine just outside of Houston. Father Louis J. Campbell, a Brooklyn-born Holocaust denier, is his spiritual mentor. But, then, so is Uncle Mel, Grandfather Hutton, his mother, their friends, church president, and so on.

The denigration of others will never come to a close unless bold steps are taken to deny carte blanche access to haters like the Gibsons.

But then again, I think this whole outburst was a Machiavellian maneuver to generate another wave of over-the-top coverage and create another division in society of Gibson defenders versus the accusers for one principal beneficiary: Gibson. His latest flick, Apocalypto, is due for release this summer.

Steve Feuerstein a radio show host and businessman based in New York City. He is the former host of Speak Your Piece! and tri-state co-host of the WWRL Morning Show, with Pulitzer Prize winning author and journalist Karen Hunter. He broke the story with Mel Gibson's father Hutton one-week prior to The Passion following three days of successive interviews with multiple family members from February 16th-18th 2004. For more information contact: Email steve@thearenacorp.com or call 646-220-2820.