Mel's Teshuva, and Ours 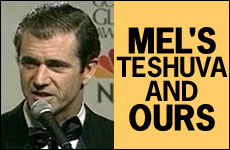 Owning up to our mistakes, without the excuses.

'Tis the season for many things: Renewal, repentance, re-jew-venation. Jews the world over are busy taking stock, setting new resolutions, and casting high hopes for the year ahead. We are also very busy with forgiveness. We seek and extend forgiveness for any wrongs that we may have committed against each other, whether in thought, word, or deed. The Torah teaches us that to the extent that we forgive others, so God will be forgiving of us.

So, speaking about forgiveness, what about Mel? Do we forgive Mel Gibson for his anti-Semitic outburst this past July, when he was stopped for speeding and DUI? The question is complex:

On the one hand, the Jewish people are known for the trait of kindness. Generosity of spirit and loving-kindness have been hallmarks of every Jewish community throughout history. Do we extend that kindness to Mel?

We also have a strong conviction in the concept of self-transformation through repentance. Even before Creation, God saw that mortal man's path to perfection would be riddled with blunders. To remedy this inevitable situation, God created the mechanism of teshuva -- repentance, through which we would be able "to clean up our mess". The Torah promises us that if we engage in teshuva, we can be granted complete forgiveness from God. So do we now extend forgiveness to Mel, in effect saying that we accept his "teshuva"?

Perhaps absolving Mel would be a wonderful opportunity to demonstrate our tolerance and mercy upon all people, including even those who openly express their enmity towards us.

Yet, we are also a people very committed to the idea of honesty and sincerity. Although it may be noble to dispense forgiveness graciously and freely, there is a limit past which this nobility may start to resemble foolishness. The question then becomes, are we to trust Mel's apology as a sincere one?

An interesting ritual of the Yom Kippur prayers might offer us some perspective on the "Mel Dilemma". There is a custom to pound our fist over our heart during the Viduy – Confession segment of the liturgy. Perhaps a reason for this custom is to bring our awareness to the fact that the root of our mistakes is inside of us. There is no external factor upon which to place the blame -- not environment, not a poor education, nor less-than-perfect parenting. At the end of the day, we must place the accountability for our mistakes squarely upon ourselves. Without the recognition that we are ultimately responsible for our actions, our teshuva is fundamentally flawed, and will not work.

At the moment we take full responsibility for our mistakes, we empower ourselves to fix them.

"Because" is a word that thwarts a lot of well-intentioned teshuva. I lost my temper with the kids because... I was disrespectful to my wife because... "Because" is an introduction to any myriad of excuses. If we could take out that word and just say, "I lost my temper -- and it was wrong of me," we open a doorway to real growth. At the moment we take full responsibility for our mistakes, we empower ourselves to fix them.

Although many have attempted to soften the sharpness of Mel's caustic remarks, contending that the alcohol made him say things he didn't really mean, the well-known dictum in the Talmud disagrees: "When the wine comes in, the secrets come out." In fact, being drunk allowed Mel to say precisely what he really did mean, but would be too afraid/smart to say when sober.

And although Mel did apologize for the harmful repercussions of his hateful words, he has not acknowledged that his vicious words are rooted in their own disease -- not alcoholism, but anti-Semitism. Gibson states, "Please know from my heart that I am not an anti-Semite. I am not a bigot." I'd rather hear Mel say, "I have anti-Semitic viewpoints, but I'd like to change them." A statement like that, along with proactive steps to remedy his warped views, positions Mel for a meaningful dialogue with the Jewish community about forgiveness.

EVEN MORE IMPORTANT THAN MEL

Mel Gibson's hateful comments have drawn much media attention, as well as our own personal attention. We debate about it, argue over it, Google the headlines, and wonder, do we forgive him or don't we? Though I do not wish to minimize the severity of his outburst, and the poisonous effect his words have likely had on many thousands of people who heard them, I wonder if God is as worried about us forgiving Mel as He is about us forgiving each other.

I doubt that on our deathbeds we will tearfully regret forgiving or not forgiving Mel. But perhaps we will regret never getting that last chance to say "I'm sorry" to our spouse, parents, or children. Perhaps we will have great remorse for bearing resentment towards that friend that we stopped calling, that uncle whom we stopped inviting, or that child, from whom we cut ourselves off.

Rabbi Yisroel Gelber, MS is co-founder of BD Health Services, Inc., a substance abuse facility in Maryland.  He is also a teacher at Yeshivas Toras HaLev: Maalot For Men, Bnos Yisroel High School, and is the founder of Chavrusamatch.com.

Why Is an Award-Winning Russian Journalist Fighting for Ukraine?
It Takes A Lot Of Faith To Be An Atheist
How Instagram Brought Back This Nostalgic Soup
What Makes Eli Run?
Comments
MOST POPULAR IN Current Issues
Our privacy policy