Teshuva and My iPod 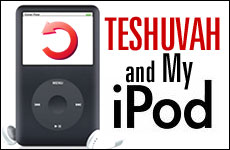 If you did something wrong, how can it be truly deleted?

It was a regular Friday afternoon. You know, all the busy preparations, running around, getting ready to greet the Shabbat Queen. Busy busy busy. I don't know what possessed me. I knew I shouldn't have done it. Since when is a busy Friday afternoon the time to upload new music to your iPod? I figured I’d do it quickly so I wouldn't have to deal with it later and then I'd have a ready well-equipped iPod. So I attached my little blue 4 GB iPod nano to my laptop. What could go wrong? Nothing, right?

My entire song list, lectures, pictures and everything else that had accumulated over the past two years on my iPod was gone. Finito. Niet. Efes. Zilch. Nada. Disappeared into cyberspace. Not transferred onto the computer or some other hard drive. Simply gone. The only thing left on the iPod were the new songs I was trying to add. So I went from 400 files to 30 in about two seconds. Yes, I checked, and all my playlists were empty. "NOOOOOOOOOOO!!"

For those of us less tech-savvy, let me mention a cute little fact. If an iPod is not attached to its "Mother Computer" which contains the iPod's entire song list, it does not automatically upload songs. The computer prompts you to transfer it all manually. Here's a life lesson: It's always a good idea to read the directions. I apparently had missed something in the prompt, so it automatically erased everything on the iPod, replacing it with the new stuff I was trying to add. This would've been okay if Mother Computer was feeling well, but Momma had crashed and was suffering from a severe case of information amnesia. So with one push of a button, it changed everything. My iPod was now dead. (Or if you were feeling especially optimistic, you could say I got a brand new one.)

I was not feeling very optimistic.

How could I be so stupid? Why didn't I read the instructions? What was I thinking? Why wasn't I thinking? All those great songs and audio lectures. The awesome pictures that had been stored only on my iPod, never transferred onto Snapfish, Flickr, Facebook -- nowhere! Arrrrg!!

It took me a while to get over this. My dear sister sent me a condolence card gently reminding me that everything is ultimately “meant to be.” She encouraged me to enjoy the present moment because "that too will not come back." I realized that she was right. Years ago, they didn't even imagine an mp3. Gotta count my blessings and move on.

Since I didn’t have any music to listen to, I had a lot of time to reflect in my iPod catastrophe. And I arrived at such an inspiring insight that I can honestly say the whole episode was 100 percent worth it. I wouldn't mind losing hundreds of iPods if it meant truly internalizing this clear and meaningful insight of what it means to start anew, to have a clean slate.

First the background: Judaism has a concept called Teshuva. When we make a mistake, we have two choices: We can either justify it -- “I was tired,” “He had it coming to him,” “It’s my parents’ fault,” etc. Or we can regret it -- truly regret it, to the point where I genuinely wish I had never done it. Even more, to transform my thinking to the point where if I’m ever in such a situation again, I will make the right choice. That is Teshuva -- a “return” to what our soul really wants to do.

Now here’s the amazing thing: If I achieve this turnaround, the historical record -- the video of my life -- gets re-edited, totally deleting the mistake. It's as if it never happened.

So I as sat there staring at my blank iPod, I wondered: How does Teshuva really work? If you did something wrong, how can it be truly deleted?

And then I realized: When we push that button, the button of sincere Teshuva, when we transfer our true feelings of regret, it changes everything. It utterly deletes the old files. Gone.

Teshuva not only erases the mistakes, it actually turns them into something positive.

Everything in the physical realm is a reflection of the spiritual realm. If history can be permanently, irretrievably deleted forevermore from an mp3, then through the power of Teshuva, the Almighty can surely delete our misdeeds from the spiritual software to the point where scrolling through the playlist entitled "Mistakes" is totally blank.

But it goes beyond this. Teshuva not only erases the mistakes, it actually turns them into positive acts (mitzvot). How does this amazing transformation work? When our mistake becomes the inspiration -- the catalyst -- for self-reflection and positive growth, that original mistake now occupies a positive place in our life. In that way, the “mistake” becomes a “mitzvah.”

Imagine your iPod going from 30 songs to 400 or more (millions? billions?). Imagine all the songs, audio books and awesome photos you ever dreamed of, all arranged in amazing playlists. Teshuva really works. It can delete, replace and cleanse all our mistakes, sending them into the dust bin of Spiritual Cyberspace.

Yocheved Goykadosh is a graduate of Michlalah Jerusalem, where she studied for a year. She is currently studying at Brooklyn College. She has previously had articles published in the Jewish Press and she lectures extensively on the I.Y.A.A.J.I.L.Y Ahavat Yisrael program.

The Urgency of Change

Through the Gate of Tears
It Takes A Lot Of Faith To Be An Atheist
How Instagram Brought Back This Nostalgic Soup
What Makes Eli Run?
Comments
MOST POPULAR IN Growth & Renewal
Our privacy policy