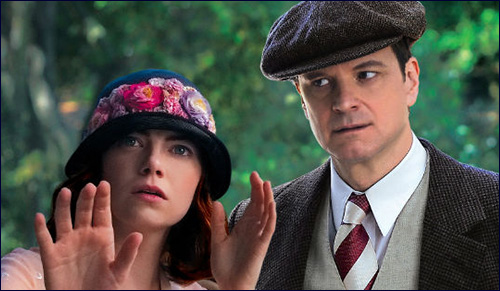 Woody Allen’s new film explores the world of magic and what exists beyond the purely rational.

Stanley Crawford is a master magician. In his professional guise as Wei Ling Soo, he wows his audiences by staging remarkable feats of illusion. But offstage, Stanley Crawford is a rigid rationalist who scoffs at the idea that there is anything in life beyond what we can see with our own eyes. “I’m a rational man with a rational world view,” he says smugly. “Any other way lies madness.”

Stanley is one of the two main protagonists in Woody Allen’s new romantic comedy, Magic in the Moonlight and is portrayed brilliantly by Academy Award-winning actor Colin Firth. As the movie begins, we see him performing sleight of hand on stage in his Oriental garb and make-up. After the show, his friend and fellow magician Howard Burkan (Simon McBurney) presents him with a challenge. Howard believes that a friend of his, a wealthy woman named Grace Catledge (Jacki Weaver), is being duped by a young woman named Sophie Baker (Emma Stone) who claims to be a medium. Grace hopes that Sophie can summon the soul of her late husband in a séance, and Grace’s children fear that not only is Sophie a fake but is out to bilk the family out of some of its fortune.

Stanley accepts his assignment with relish. Already known as one of the greatest debunkers of fake spiritualists in the world, he is cocksure he can make quick work of this case too. But he is in for a surprise. After arriving at the Catledge mansion in the French Riviera, Stanley is immediately disarmed by Sophie’s accurate premonitions and demonstrations of knowledge about his life that she could not possibly have known. He dismisses her first “guess” as a lucky one but he cannot ignore her continued feats of psychic knowledge, or her success in leading the séance where the late Mr. Catledge “answers” questions to the delight of his wife, Grace. And he certainly cannot ignore Sophie’s huge, luminous eyes, youthful beauty, and plucky personality, which are working their own magic on Stanley.

Could Sophie’s mystical powers be real? Is she really capable of tapping into the unseen world of a transcendent reality? If so, Stanley’s entire worldview collapses. The audience follows Stanley’s journey in Sophie’s company as he struggles to find the flaw in her system and struggles to resist her romantic charm. He fights to preserve his notion that any idea of a mystical or God-based reality is nothing more than “sugarcoated claptrap,” yet admits to Sophie that she has introduced him to the first real mysteries and magic he has ever encountered.

Magic in the Moonlight is set in the 1920’s, a time when hypnotism and spiritual mediums had their heyday. Séances were common, and Harry Houdini (real name: Erik Weisz) attended many of them, trying to unmask as fakes as many clairvoyants as he could. Woody Allen, who wrote and directed this film, has been fascinated by the world of magic and the paranormal since he began performing magic tricks as a teen. Magic and magicians have played roles in many of his works, including his famous stand-up routine “The Great Renaldo,” in his O. Henry Prize-winning short story “The Kugelmass Episode,” and in several of his films. Broadway Danny Rose, The Curse of the Jade Scorpion, Zelig, The Purple Rose of Cairo and Midnight in Paris have all featured hypnotists, fortune tellers, or whimsical fantasy. Allen himself played magician The Great Splendini in his 2006 film, Scoop.

Stanley seems to be a stand-in of sorts for Woody Allen, who is well known for his atheism, but whose undercurrent of doubt about whether in fact there is a world beyond this one have made their way into many of his most famous jokes, for example: “What if everything is an illusion and nothing exists? In that case, I definitely overpaid for my carpet.” And: “I don’t want to achieve immortality through my work. I want to achieve it through not dying.”

Watching this delightful and often very witty film from the perspective of a Jew who believes wholeheartedly in God and in the idea of a transcendent reality, I sometimes wanted to shout to Stanley, “Of course there is more than what you see in front of you. How could anything exist without the Ultimate Designer?” Stanley, and perhaps his creator, Woody Allen, want very much for there to be more than meets the eye, and if they resisted a bit less they could see evidence of transcendence each and every day. I mean, can you make the Earth rotate on its axis each day? How about that “chance” meeting between you and your spouse all those years ago that led to your getting married and having a beautiful family together? And so on.

It’s no accident that one of the many names for God in Hebrew is HaMakom, which means “The Place.” That might seem an odd name for the Almighty, but God is not part of the universe in any typical way. Rather, the universe is part of God. HaMakom is “the place” that transcends all space and time, and enables us to think, speak, and create things both mundane and magical.

Similarly, the Hebrew word for “world” is Olam, which means hidden. The Sages teach that much of what we see in the physical world is illusory, and only after 120 years (give or take) will we see what’s really real when we arrive in the “World of Truth.”

As Rabbi Noah Weinberg said in Way #31 (Seek the Ultimate Pleasure) of his 48 Ways to Wisdom series, “Humans yearn to transcend the mundane side of daily life. That's why mystery, magic and miracles capture our imaginations.” Magic in the Moonlight is a movie that easily captures the imagination, and may be a great starting point to talk with friends and family about what is real beyond what we can see with our own eyes.

Avengers: Age of Ultron
Lessons from the Book of Jonah
Where Are We? The Body, Brain, Soul Problem
Dr. Sheila Nazarian’s Escape from Iran
Comments
MOST POPULAR IN Jewlarious
Our privacy policy
Aish.com Is Looking for Great Writers