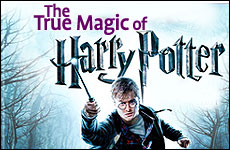 It's character, not wizardry, that counts.

The story of Harry Potter, whether in written or movie form, has captured – and held – the imaginations of millions throughout the world.  Although J.K. Rowling is certainly a talented and creative author, that is not the real secret of her appeal.  Ironically, one of the keys to success in popular culture is to play to old, classic themes – in a fresh and innovative manner.  Stories like Harry Potter’s resonate with so many of us because they touch on universal themes and values.

The overarching principle that runs through each installment of the series is that character counts.  This lesson is illustrated at many different points along Harry’s journey.

As Snape remarked disdainfully, Harry is, in fact, a “mediocre magician”.  His only truly unique magic is his ability to create a “Patronus”.  And even that is based on his character, on his ability to take pleasure and think positive, happy thoughts.

What really sets Harry apart is not his wizardry.  He consistently demonstrates the virtues of courage, loyalty and love.

Nowhere is this more evident (spoiler alert) than in his final showdown with Voldemort where Harry is willing to risk it all – his life included – to destroy the evil that his enemy represents.   Harry knows that being good and doing what’s right is even more precious than life itself.

But he doesn’t just demonstrate his adherence to this truth in the major dramatic moments.  It is a reality he lives with.  Dumbledore lauds Harry for his “humility” while rebuking himself for the mistake of pride in intellect. He praises his “infinitely more admirable brother” for his simplicity in just doing what’s right and recognizes in Harry the same qualities and abilities.  Dumbledore finally sees clearly that goodness is the ultimate triumph, even over intellect (the university degrees of the SS are a constant, eloquent reminder of this fact).

Ultimately Dumbledore dies and Harry has to stand on his own and fight his own battles, the most difficult one of course not being the one with He Who Shall Not Be Named, but with himself.  He has to find the inner strength to act with independence and conviction.  “If I am not for myself, who will be for me?”

And finally, Harry recognizes the value of friendship.  Right down to the “happily ever after” ending, the bonds of loyalty and commitment to Ron and Hermione remain unbreakable.

Not only are the lessons from Harry Potter timeless and invaluable but it’s hard to think of a more entertaining way to learn them!

The Kosher Kritic: Baby Driver
Lessons from the Book of Jonah
Where Are We? The Body, Brain, Soul Problem
Dr. Sheila Nazarian’s Escape from Iran
Comments
MOST POPULAR IN Jewlarious
Our privacy policy
Aish.com Is Looking for Great Writers