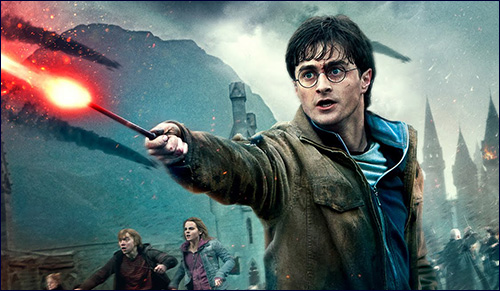 News of a Jewish wizard at Hogwarts reminded me of 5 Jewish values reflected in the series of books.

It’s official. Astute readers of the Harry Potter series have long suspected Harry’s friend and ally Anthony Goldstein might be Jewish (living at Hogwarts with a kosher meal plan). Now author JK Rowling has confirmed the matter, tweeting a Jewish fan who enquired if there were any Jews in the books: “Anthony Goldstein. Ravenclaw. Jewish wizard.” The next day Ms. Rowling enigmatically suggested the possibility of a minyan at Hogwarts: “Anthony isn’t the first Jewish student, nor is he the only one. I just have reasons for knowing most about him!”

Although Anthony is currently the only publicly known Jewish wizard at Hogwarts, the major characters in Harry Potter often reflect core Jewish values. Here are five ways in which the characters and plot of the series echoes some key Jewish teachings.

1. Our choices define us.

Our choices define us, Dumbledore tells Harry at the end of the first book, Harry Potter and the Sorcerer’s Stone. Dumbledore is talking about Harry’s decision to reject the possibility of joining Slytherin – the school house of choice for “dark” wizards – and ask to be placed in the more positive environment of Gryffindor House instead.

This echoes a powerful Jewish belief. Each one of us is beset with conflicting motivations and desires. The Torah calls these the yetzer hara (evil inclination) and yetzer tov (good inclination). No one is immune. The most righteous people are not those with little desire to act badly: in fact, our sages say those who achieve the highest levels of good action are often those with the greatest natural urge to do ill. What distinguishes them is their desire to refine themselves: to work on their character traits, and to choose to do what is right. With practice, making choices that lead us towards becoming better people becomes easier; we become stronger in our commitment to doing what we know is right.

2. We each have a crucial role to play.

We each are born with vastly different strengths and abilities. The Torah teaches we’re each given a specific set of tasks in life – we’re each charged with accomplishing things that only we are able to – and we’re each given the exact tools we need to accomplish them.

We each come into the world with certain strengths and handicaps. We’re judged not by our circumstances, but by how well we do within them. JK Rowling illustrates this concept beautifully in her Harry Potter series. Many of the most important acts are performed by minor characters, often by those who objectively seem the weakest. Whether it’s the bravery of Dobby the House Elf, the crucial aid delivered by ditzy Luna Lovegood, the heroic acts performed by some of the books’ most awkward characters, everyone has a crucial role to play: in the magical world of Harry Potter, everyone is important.

3. Working to develop our talents.

Nobody is born an accomplished wizard; it takes many years of attending Hogwarts School of Witchcraft and Wizardry – and lots of practice – to achieve mastery.

This echoes the Jewish view as well. The goals that are most rewarding require the greatest effort to achieve. In Judaism, fulfilling our potential isn’t a solitary endeavor; it’s a partnership, with our friends and peers, and also with the Divine.

4. Treating everyone with respect.

The great Rabbi Shammai famously summed up his life philosophy: “greet everyone with a cheerful face” (Pirkei Avot 1:15). The Talmud relates that the great rabbis of the Talmud put this advice into practice, being the first to greet everyone they met – Jewish and non-Jewish alike – with a cheerful, friendly greeting. This is more than simple politeness; extending a warm greeting to everyone sends a message that you care about them, that you regard them as an important, worthy individual.

Harry Potter provides vivid examples of this type of friendliness and willingness to reach out to others on the part of some of its most sympathetic characters. Prof. Dumbledore, the kindly headmaster, is careful to be polite and courteous to all; his willingness to extend his hand in friendship even earns him the respect of magical creatures (the otherwise fierce and aggrieved Centaurs, or the murderous giant spiders living in the Forbidden Forrest, for instance). Harry, his protégé, follows this example: he’s polite to everyone and everything he comes across, from House Elves to his fellow students. By relating honestly and with friendliness to every creature, no matter how humble, Harry Potter distinguishes himself as someone capable of true greatness.

There’s a chapter in Harry Potter and the Deathly Hallows, the final in the series, in which Harry contemplates going off alone to finally confront his nemesis Voldemort. Harry doesn’t want to endanger his friends, he reasons, and another darker motive seems to tempt him too: he doesn’t want to be slowed down by anyone; he doesn’t want to beholden to anyone as he completes his final quest.

Without giving too much away, it’s fair to say Harry never deserts his comrades. From the first book in the series to the seventh, final volume, Harry is firmly embedded in a close circle of friends. His buddies Ron and Hermione – and the enthusiastic group of students he organizes as Dumbledore’s Army – all back him up and contribute to his success; Harry could never accomplish his goals without them.

Surrounding ourselves with people whose goals and values we admire is one of the most important decisions we can make. The Torah recognizes that we are profoundly influenced by the people around us, and urges us to think carefully and choose communities whose goals we share. The great Rabbi Hillel advised “Don’t remove yourself from the community” (Pirkei Avot 2:5). When things get difficult, the support of a warm community whose goals we share can give us the strength to continue on and achieve our potential.

Like Harry Potter at Hogwarts, it’s up to each of us to seek out a community of friends and mentors to help us develop our own potential, as well. The charm of the Harry Potter series is watching Harry and his friends work hard to achieve their full promise. In that, we can all strive to be like Harry, struggling through the years to achieve our goals.