Harry Potter and Free Will 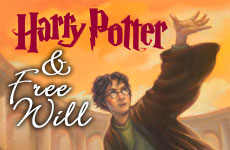 Ultimately, it's our choices that make us who we are.

We feel an indistinct chill running down our spines as we read the lost prophecy uttered by Professor Trelawney to Albus Dumbledore in a room above the bar at Hog's Head Inn in the year of Harry Potter's birth. It was a prophecy that set Harry Potter on his life course.

Throughout the series J.K. Rowling has played with two conflicting themes: determinism and free will.

The existence of the prophecy is an interesting twist in the Harry Potter odyssey. Throughout the series J.K. Rowling has played with two conflicting themes: determinism and free will. Free will has appeared as a strong guiding component in Harry's life; the Sorting Hat wanted to place Harry in Slytherin, but Harry chose Gryffindor, thus deciding what type of wizard he was to become.

But at the same time Rowling has utilized deterministic elements throughout: the wand chooses the wizard, and not the other way around. The lost prophecy is another aspect of the story that ushers in a both elements simultaneously. It is primarily deterministic; if Harry and Voldemort have been set against each other since before Harry was born, what choices did that leave Harry? Harry was destined to lead this final battle against Voldemort because "neither can live while the other survives."

But even within this highly deterministic prophecy, Rowling gives room for free will, leaving the prophecy slightly ambiguous. We later learn that the prophecy could have also referred to Neville Longbottom, but Voldemort chose Harry to be his ultimate foe because Harry was a half-blood like himself.

The issue of free will and determinism is one that has plagued religious and non-religious thinkers alike. Baruch Spinoza (1632-1677) was a Dutch philosopher who composed a philosophical system based on determinism. He believed that God and nature are synonymous and that nature is run on a pre-determined course. People are simply aspects of nature, and thus must follow this pre-determined course exhibiting no free will of their own. Spinoza's determinism has been adopted by some in the scientific community who feel that our actions are determined solely by our genes. We are essentially destined to live the lives of our parents and grandparents; our decisions are based on our internal programming.

It is a depressing outlook on life, and a counterintuitive one. We have all made decisions that went counter to our instincts. There are clearly many factors that go into our decision making, which is why many other scientists disagree with the determinists.

Jewish philosophy wrestles with the question of free will and determinism. Judaism claims that God knows everything that man will do. Furthermore, God's knowledge of my future actions implies that I must perform those actions. (Otherwise God will have false knowledge, which is clearly an impossibility.) But at the same time, free will is the cornerstone of Judaism. How can I be held responsible for my actions if I have not really caused them? And why should I bother to try to better myself if all actions have been pre-determined? So how can we reconcile free will with God's foreknowledge? Furthermore, if a prophet can predict future events, doesn't that imply that those events are determined?

Jewish philosophers have come up with many approaches, one of which is similar to Rowling's. Just as Rowling's prophecy was unspecific (allowing the possibility that it referred to Neville and not Harry), biblical predictive prophecies generally have an element of open-endedness. For example, Abraham was told that his children will be in servitude for 400 years. "Know for sure that your descendants will be strangers in a land not their own, and they will serve them, and they will cause them to suffer for 400 years" (Genesis, 15:13). God didn't reveal to Abraham that the Egyptians would enslave the Jews. According to Rabbi Saadiah Gaon, the Egyptians didn't have to volunteer; they chose to be the ones to do it. That is why they were held responsible in the end for their actions.

Judaism stands squarely on the side of free will.

Another popular solution was propounded by Isaac ben Sheshet Perfet (1326 1408) in his Responsa collection (no. 118). He explains that God's knowledge is not causative. Just because God knows what man will do it doesn't mean that man isn't acting out of free will. So if I offer my three year old a choice between watching Barney and watching the news, I'm pretty confident in her selection. But that doesn't imply that I in any way caused her to choose Barney.

Judaism stands squarely on the side of free will. As the Torah says, "I have placed life and death before you, blessing and curse. Choose life so that you will live, you and your offspring" (Deuteronomy 30:19). Personal responsibility is the cornerstone of Judaism's view of reward and punishment. God judges us based on our actions and our ability to overcome our natures, given the infinite array of factors that comprise our unique life situation. As the Rambam states, "We know without a doubt that man's actions are in his own hands. God does not pull him [in one direction], nor does He decree upon him not to do this or not to do that" (Laws of Repentance, 5:5).

Perhaps Dumbledore sums up Judaism's position best when he explains, "It is our choices, Harry, that show what we truly are, far more than our abilities." (Harry Potter and the Chamber of Secrets, 333)

Cheryl Berman is a freelance writer who lives in Israel.  Her first book, Reasonable Doubts, will be published within the year by Urim Publications.