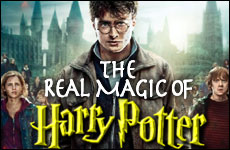 It lies in the dogged determination of its author J.K. Rowling.

There will be some people breathing a sigh of relief that the Harry Potter saga is at last coming to an end with the release of Harry Potter and the Deathly Hallows Part 2. But for many, this will mark the end of a cultural experience that has animated their lives for over a decade. “Harry Potter is over, see you in therapy” declared one of the fan’s placards at the recent London premiere.

The Harry Potter manuscript was rejected by an astonishing 12 publishers.

And what a way to go! The London premiere of Deathly Hallows saw a red carpet that stretched for three quarters of a mile from Trafalgar Square to Leicester Square, probably the longest red carpet ever. The barriers were lined with thousands of excited Potter fans, many of whom had camped out for several nights. The movie itself has already been described by critics as the best in the series and a fittingly superb conclusion.

In fact, the Harry Potter phenomenon has astounded everyone. It began with the publication of ‘The Philosopher’s Stone’ in Britain in 1997 (published in the U.S. as ‘The Sorcerer’s Stone’ in 1998). Since then, the author J.K. Rowling has sold over 450 million books, smashing all records for book sales, and the movies have amassed £4 billion worldwide. J.K. Rowling’s net worth now stands at about $1 billion, making her the 12th richest woman in Britain, not far behind the Queen! Not bad for a woman who wrote ‘The Philosopher’s Stone’ in cafes since she couldn’t afford to heat her own home!

Apart from simply entertaining us, what if anything has Harry Potter actually taught us? The story itself, is reminiscent of many well known legends and epics recounting the cosmic battle between good and evil. Its celebration of courage, friendship, love and loyalty are all principles that have long been championed in literature and other spheres. And though Rowling writes well and engagingly, she is not quite Dickens or Dostoyevsky.

The success of Harry Potter, I think, lies in the ambition of its conception. Sadly we live in a time when the entertainment industry, particularly Hollywood, pumps out franchises as long as the cash keeps rolling in, even if the story itself has run out of steam. Many will agree that ‘The Pirates of the Caribbean’ franchise lost its lustre long ago, and ‘X-men’ has had to go backwards to find a fresh angle to explore. The problem in these examples is that the original stories were not conceived as parts of a longer tale, and therefore their continuation feels gratuitous and mercenary.

Harry Potter, in contrast, was from the outset intended to be an epic. In fact, Rowling is reported to have first drafted the final chapters of part 7 as early as 1990! And this, in my opinion, is where we can find the true lesson of this phenomenon.

Why did J.K. Rowling think that she could realize her dream of an epic stretching to seven volumes back in 1990, when she barely had enough money to live on? She was unpublished and completely unknown when she dreamt up Harry and his world, unlike other authors who have written works of a similar epic nature. J.R.R. Tolkein (author of ‘Lord of the Rings’) and C.S. Lewis (‘The Chronicles of Narnia’) were both highly regarded and well-known academics when they embarked on their respective tales. How could Rowling presume to undertake such an ambitious project?

Indeed, her first manuscript was rejected by 12 publishers, and during this period, she could easily have given up, or opted for something less elaborate. When the story was at last accepted for publication, the publisher advised Rowling to ‘get a day job’ as she was so unlikely to make any money from her writing. But Rowling kept her dream alive and ploughed on.

Although ‘The Philosopher’s Stone’ is seemingly just a fun, light and amusing adventure, there are hints as to the scope of the epic to come, and as one Potter book followed the next, the public became thirstier and thirstier for the next instalment. Had the first couple of books not promised so much, it seems to me unlikely that the phenomenon would have snowballed so dramatically. Readers could early on sense the breadth of the story, and eagerly anticipated drama, tragedy, comedy, and an Armageddon like climax. Readers wanted to be part of this, and they were not disappointed.

If J.K. Rowling’s dreams came true, why can’t ours?

Had Rowling compromised her vision, would she be where she is today? I don’t think so. The tremendous ambition, and even audacity of her plan for Harry, directly led to her astonishing rise to fame and fortune.

If the fairy tale that is J.K. Rowling’s story can actually be true, why can’t we aim for the top and really believe that it is within our reach? In all areas of life, we are required to be idealists, but often with time, and sometimes disappointment, enthusiasm wears thin and we compromise.

But we only have one chance at life, so why not live it in the best, most ideal way? If we really worked hard and pushed through disappointment, perhaps we would be more successful in those areas that are most sacred to us; our relationships with people, our efforts to overcome negative character traits, our longing to connect with G-d.

That is the lesson from the Harry Potter craze. Had Rowling given up, or had she aimed lower, she would never have reached the stellar heights we see her gracing today. If we cling to our dreams, even from the lowest point, perhaps we can persevere enough to one day see our dreams realised and reach the very top.