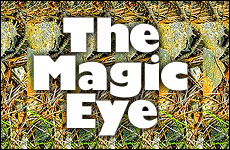 Sometime we need to learn how to see.

"What's that?" asked my four-year-old daughter, sitting at the breakfast table with the comics page spread out before her. She was pointing to a panel of blurred colors forming no coherent image. A brief note beneath the panel offered the following instruction: Hold the page close to your face and focus as though you are looking through the image. Slowly pull the page back; a 3-D picture will appear.

I gazed at the panel for several seconds. No picture appeared, 3-D or otherwise.

"I don't know, sweetheart," I said, and walked away.

This was my first encounter with random-dot autostereograms, what many of us are more familiar with as Magic Eye® images. And every time I came across another one I tried again, staring without focusing, looking for a picture that refused to emerge.

Several years went by, with Magic Eye images becoming a minor but increasingly prickly source of annoyance. Possessing – or so I like to believe – at least average intelligence and perspicacity, it irked me that I was continuously unable to comprehend, much less master, any puzzle relegated to the funny pages. I suspected the whole thing to be some kind of hoax, although my middle-school students assured me that the images were genuine and that hidden pictures could be discerned.

And then one day it happened. Gazing into a chaotic array of multicolored dots, suddenly I saw the crisp image of a carousel pop out of the panel and into my vision, its sharp edges and clearly-defined form floating supernaturally above the page. I blinked in surprise, and it disappeared.

A lot of people are still trying to discover the trick of the Magic Eye. Of those who have cracked the secret, many never fail to lose their sense of fascination or, in some cases, their obsession.

The more certain we are of our own clarity, the more likely we are to miss the picture.

The first three Magic Eye books remained on the New York Times bestseller list for a combined 73 weeks, selling more than 20 million copies in more than 25 languages. The newspaper comic strip that caused me so much anxiety became the fastest start-up syndication in the history of the Universal Press Syndicate.

What is the source of so much captivation? Quite possibly, there is something within the mystery of the Magic Eye that echoes the most profound mysteries of Creation, something that tickles our spiritual sensitivity and piques the deepest longing of our souls.

Despite my semester of college physics, the explanation of how autostereograms work leaves me figuratively cross-eyed. Normally, our right and left eyes perceive slightly different images; this results from parallax, the distinct angle of perception of one eye from the other, due to the minimal but significant distance between them. By blending the two images together, our brains produce the "stereo vision" responsible for visual perception of solidity and depth that allows us to see three dimensionally. 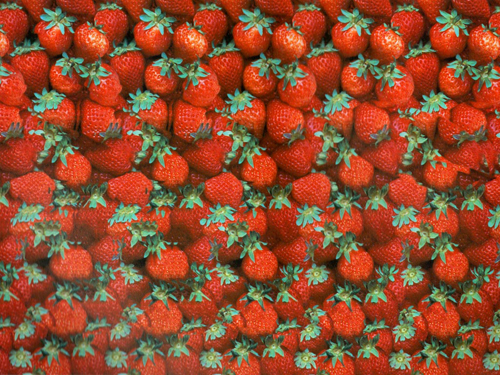 When printed images are repeated across a page, the brain can be tricked into refusing to focus on any single image, thereby creating the illusion of three-dimensionality. By shrinking and varying the pattern of repetition, a seemingly-random pattern of dots can be produced that will, when viewed with a conscious effort to keep the eyes unfocussed, allow a hidden 3-D scene to emerge. Hence, the Magic Eye.

As much as we assert that "seeing is believing," we know that this familiar axiom is often untrue. None of us denies that our clothes and furniture and automobiles are composed of countless molecules – as are we ourselves – even though most of us have never directly viewed a molecule. None of us doubts that molecules are themselves composed of atoms, which have nuclei composed of protons and neutrons, and which acquire their size and shape from electrons, which careen through tiny orbits at virtually the speed of light. Nor does it seem to bother us no one has ever directly observed subatomic particles, which are too small to actually be seen with conventional or even electron microscopes.

Indeed, so counterintuitive is quantum theory that it was considered metaphysical fantasy when first suggested, as were germ theory and heliocentricity and a host of other phenomena that we now accept without question. Clearly, direct perception is not always the most reliable method of understanding our universe. Sometimes, we need to be taught how to see.

Thus the attraction of the Magic Eye, which teases us with a new mystery hidden within every arrangement of colored dots and forces us to look beyond the superficial two-dimensional image before our eyes in order to discover the hidden 3-D image that lies beneath the surface. Even after the picture comes into focus, with one moment’s inattention it vanishes again. We have to work to recover what we know is there but can no longer see.

Just as the physical world disguises its true essence by concealing the atomic particles that form the building blocks of Creation, similarly do the spiritual foundations of the universe lie hidden behind the veil of nature and the illusion of randomness. And if we don't question our senses – the same way that the uninitiated could never imagine that there might be a lobster hiding among a bushel of strawberries – then we will surely miss the deeply textured reality that stares us in the face.

But once we have learned how to look and how to see, we will never again remain satisfied with the spiritually two-dimensional panorama of our world, and will never again hide behind the illusion that there is nothing more than meets the eye.