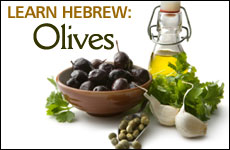 The symbol of peace, light and longevity.

Olives – tiny fruit, bitter when picked, tasty and healthy after being treated; dark-green leaves that reveal a silvery glow when meeting the sun’s rays. The olive fruit (זַיִת – zayit) is tasty and healthful, not to mention the oil that it produces – known through the ages for its nutritional and healing value. This wonderful product gives the Mediterranean kitchen its unique flavor. As well, its oil (שֶׁמֶן - shemen) plays a significant role in Judaism – in anointing kings and high-priests, and to light the menorah in the Holy Temple. That is why the olive is one of the Seven Species with which the Land of Israel is blessed. 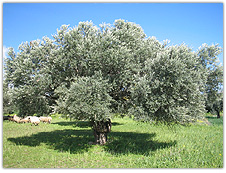 The olive tree – a magnificent latticed trunk, evolving from strong and figurative roots that hold on to light, non-rich soil. Trees that resist drought, diseases and even fire – whose roots regenerate the trees even after the ground is destroyed. Trees which live many years, and the older they get, the more interesting and pictorial they appear. Some olive trees have been known to live for more than 2,000 years.

And not to forget the olive leaves – the symbol of peace. In the Bible, the dove (יוֹנָה - yona) brought Noah an olive leaf after the flood, to show that the waters had abated and that calm had been restored. Since then, the olive leaf symbolizes the hope for peace, the hope that evil and destruction will be rid from the world, and that we can all live in safety.

And the dove came unto him at evening; and in her mouth was an olive leaf, freshly plucked; so Noah knew that the waters had receded from the earth. (Genesis 8:11)

For its national emblem, the State of Israel chose olive leaves placed around a menorah. The olive leaves symbolize peace (שָׁלוֹם - shalom), as this is our wish. Also, the symbol of the Israel Defense Forces (IDF, צְבָא הֲגָנָה לְיִשְׂרָאֵל – צה"ל) shows a sword wrapped by an olive branch – we seek peace, though we are prepared to defend against our enemies. The olive branch also symbolizes the light of Jewish wisdom, as represented by the menorah in the Temple. 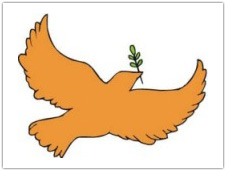 The olive tree bears fruit when it is six years old, but the older it gets the more fruitful it is. In the autumn season, olives are harvested (מָסִיק- masik). The trunk, or the entire tree, is shaken, and the olives fall into a sheet on the ground. The harvester can also stand on a ladder and "milk" the olives into a sack, or use an electric tool that removes fruit from the tree. The most important technique of harvesting olives is doing it at once, so no olives fall to the ground without being picked. The olives are then brought to the olive press (בֵּית בַּד – beit bahd) to be turned into oil.

May we all merit to live with the traits symbolized by the olive: peace and calmness, light and beauty, fruitfulness and longevity. 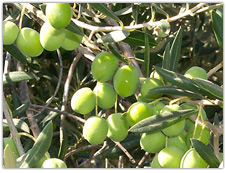 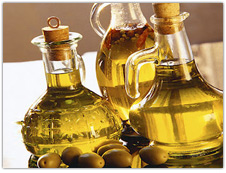 יִצְהָר
Yitzhar means "refined fresh olive oil." Yitzhar was the grandson of Levi, and the father of Korach. (Exodus 6:18 and Numbers 16:1)

יוֹנָה
Yona (Jonah), meaning "dove or pigeon," is used for both boys and girls. Yona is the biblical character who, while trying to escape from his mission as a prophet, was swallowed by a huge fish and lived in its belly for three days. 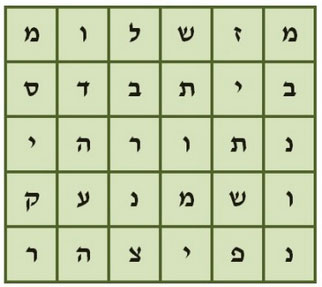