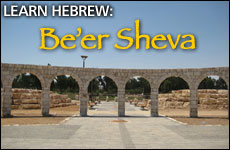 The Torah tells us that when Abraham went from Ur Kasdim (אוּר כַּשְׂדִּים) in present-day Southern Iraq to the Land of Israel, he stopped in Be'er Sheva. Since this place is located in the water-scarce desert, Abraham dug a well. The local residents stole this valuable well. Abraham then confronted the local king, Avimelech (אֲבִימֶלֶךְ), and together they made a pact (בְּרִית, brit) stating that Abraham owned the well. Avraham gave Avimelech seven (שבע) lambs as a testimony that he dug the well (בְּאֵר) and they both swore (נִשְׁבְּעוּ) upon it. 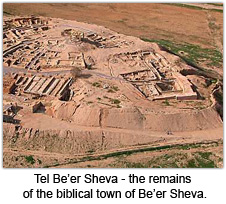 Note that the word “Sheva” could also refer to the seven lambs that sealed Abraham and Abimelech's oath.

The modern city of Be'er Sheva was erected in 1900 when the Ottoman Turks built a regional police station in order to secure the Negev region. Both Jews and Arabs moved in to settle the town.

In 1928, wide-scale Arab riots left 133 Jews dead, and many Jews abandoned Be'er Sheva. After an Arab attack on a Jewish bus in 1936, the remaining Jews left. That’s why the 1947 UN Partition Plan included Be'er Sheva in the territory allotted to the Arabs, since the city's population of 4,000 was primarily Arab.

In the ensuing War of Independence, however, Be'er Sheva was restored as a Jewish city.

Be'er Sheva has expanded throughout the years and in the last two decades has doubled in size with an influx of immigrants from Ethiopia and Russia. It is currently the seventh-largest city in Israel with a population of 188,000.

Be'er Sheva has the distinction of being Israel's “chess center.” Be'er Sheva is reputed to have the highest percentage of grandmasters of any city in the world (many of them immigrants from the former Soviet Union).

Allenby Garden - גַּן אָלֶנְבִּי. In 1915, when the land of Israel was ruled by the Ottoman Empire, a Turkish army commander invited a group of Jewish agriculturists to help “make the desert bloom.” They planted trees, flowers and vegetables, and in the center of Be'er Sheva, they designed a beautiful garden that included an immense pillar commemorating Turkish military victories over the British. 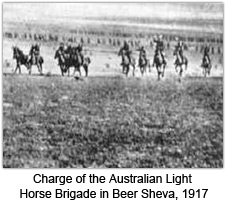 This idea didn't last long, however. In October 1917, British Commonwealth troops under the command of General Allenby, led by 800 Australian soldiers with only horses and bayonets, overran the Turkish defenses. This has the distinction of being the last successful cavalry charge in British military history. After the victory, the site became known as Allenby Garden.

The Markets – הַשְּׁוָקִים - In the early 20th century, nomadic desert-dwellers, the Bedouins, came to Be'er Sheva to buy and sell their products – camels, horses, goats and sheep, as well as coffee, spices, clothes and even weapons. Till today, a Bedouin market operates one day a week in Be'er Sheva. Although it bears little resemblance to the colorful and lively markets of earlier times, you can still smell the desert and find some interesting Bedouin products. 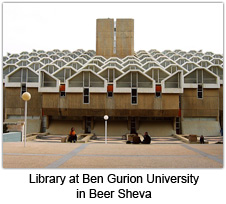 Ben-Gurion University was established in 1970 and today has an enrollment of 17,400 students. One of the university's goals is to promote development of the Negev region, inspired by the vision of Israel's first Prime Minister, David Ben-Gurion, who believed that the country's future lay in the relatively undeveloped south.

Tel Be'er Sheva (תל באר שבע) is an archeological site in southern Israel believed to be the remains of the biblical town of Be'er Sheva. Be'er Sheva is mentioned numerous times in the Bible, often as a means of describing the breadth of the Land of Israel – i.e. “from Be'er Sheva to Dan” (see Judges 20:1-3 and 1-Samuel 3:19-21). The site is noteworthy for its elaborate water system and huge cistern, carved out of the rock beneath the town. A large horned altar was uncovered at the site, attesting to the existence of a religious cult which was probably dismantled during the reforms of King Hezekiah (2-Kings 18:4).

Israel Air Force Museum is located just outside of Be’er Sheva at the Hatzerim Air Force Base. Visitors can often hear the roar of engines from the base, including state-of-the-art F-15s and F-16s. The main display consists of 140 fighter planes, such as Phantom II’s, Skyhawks, combat helicopters, and some of enemy aircraft captured by Israel, including Soviet MiGs. A Boeing 707 on display was used during the Entebbe Raid, the rescue operation of kidnapped Israelis in Uganda. On special occasions, historic aircrafts conduct air shows for visitors.

Be’er Sheva in the Bible 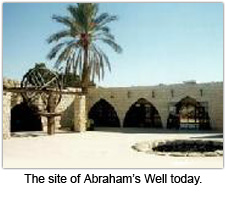 Be'er Sheva is mentioned many other places in the Bible: 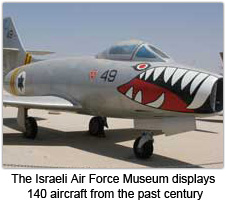 According to the Bible, the name Abraham is constructed of the words אב (av, "father") and המון (hamon, "many"). His birth name was "Abram," but it was later altered to "Abraham" by God, as the verse says: "No longer shall your name be Abram, but rather Abraham, for a father of many nations I have made you" (Genesis 17:5).

The name literally means "seven-year-old girl," but following the etymology of Be'er Sheva, the name Bat-Sheva can be understood as "woman of oath." In the Bible, Bath-Sheba became King David's wife, and the mother of King Solomon (1-Samuel 12:24). 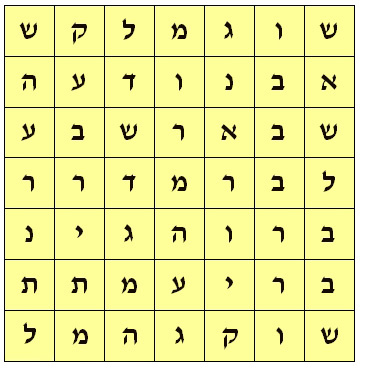