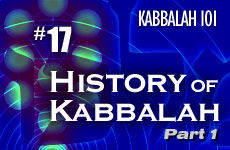 A mysterious dialogue between Moses and God gives us clues to the "ways of God" -- revelations of a deep mystical knowledge which enriches our understanding of the Torah.

Before exploring the rest of the Ten Sefirot, for the next couple of installments in this series I would like to delve into the source of Kabbalah, its development over the years and the reasons for its "secrecy."

One of the reasons that the mystical tradition of Judaism is called Kabbalah (meaning "received") is in order to emphasize that one must have received this mystical understanding of the Torah. The elements of Kabbalah were revealed by God at the same time as the rest of the Torah and then transmitted from one initiate to another, unlike other aspects of the Oral Tradition which involved interpretation.

When one gives an interpretation of any aspect of Torah or Jewish law using a rational (as opposed to mystical) perspective, one need not have a direct source for the statement. The statement needs to fit in with the general spirit of Torah, and must make sense in the context that it is presented. It ought to have some support from other areas as well.

In Kabbalah one has limited ability to offer "new" interpretations -- accurate transmission is the key.

In Kabbalah, however, one has limited ability to offer such "new" or "original" interpretation. We are dealing with a discipline that its elements were revealed to man by God, the way in which all of the Torah was revealed, and then transmitted from person to person along the way.

We are now going to trace some of the milestones of the ongoing revelation of Kabbalah.

The first place is the Torah itself. In the Book of Exodus there appears a very mysterious dialogue between God and Moses.

He [Moses] then said: "Please grant me a vision of your glory."

He [God] said, "I will take all My goodness, and pass it in front of you, and I will call out the name of the Lord before you; I will be gracious unto the one to whom I shall be gracious, and I will be merciful unto the one to whom I will merciful." And He [God] said: "You cannot see My face, for no man can see Me and live." And the Lord said: "There is a place next to me and you can stand upon the rock. And as My glory passes by, I will put you in a cleft of the rocks, and I will put My palm upon it until I pass by. I will then remove My palm, and you will perceive My back; but My face will not be seen." (Exodus 33:18-22)

As mysterious and unclear as this dialogue is, there are a few very important points that can be derived from it.

Bear in mind that this dialogue had taken place very soon after the giving of the Torah. Moses had been given the Torah in its entirety, and there was none left over. (See Maimonides, "The Foundations of the Torah" 9:1.) So what more did Moses want from God?

The answer is that he was pleading for a depth of understanding of the revelation he had already received, not for a new Torah. We see from his request that there is an understanding of Torah that is held from us, and that having Torah in its entire breadth which Moses had received at Sinai, is no guarantee of comprehending this deeper understanding.

We see from God's reply that the nature of this deep understanding is not about God Himself, but, rather, about God's interaction with our world.

How God rules the world is the substance of this deep knowledge that Moses seeks.

Our Sages have explained that Moses' request was the ultimate understanding of "why the righteous suffer and the wicked prosper." This is readily seen in God's reply about "being merciful to those to whom I will be merciful." How God rules the world -- His ways and mores -- are the substance of this deep knowledge that Moses seeks.

God placed limits on the level of comprehension that one can have. Some people (used to special effects of Hollywood movies) imagine that "no man can see God and live" is because of the blinding light and booming sound! There is no such thing as a physical awareness of God. Rather, our Sages explain that the correct interpretation of this verse is that "no man can fully comprehend God while alive." A person –- no matter how refined -– is still physical, and his understanding is somewhat physical. This prevents him from understanding those things that are to some degree totally metaphysical.

And this is what is meant by "and you shall see My back." Just as when I view a person face to face I get a full sense of what he is saying and doing, so too seeing God "face to face" means comprehending God's ways with absolute clarity. Man cannot do this. We can only see God's from His back -- which means we can have an idea about what He's doing, but not absolute clarity.

These understandings are included in "the name of the Lord."

Indeed, the various names of God that forms the heart of Kabbalah are not some mysterious deep-throated unpronounceable words that cause cosmic upheavals. Rather, they are descriptions of certain facets of God's interaction with man.

Thus, when Moses requested a deeper insight into God's mysterious ways, the revelation of His name(s) was the primary vehicle for that.

The more specific knowledge of God attained at that time point is the knowledge of goodness that is beyond our scope of understanding.

Let us see this in context of the events surrounding this mysterious dialogue:

The children of Israel had gravely sinned by worshipping the Golden Calf, and their due punishment was to be completely and utterly destroyed. Moses could not master the words of prayer that would ameliorate the situation. He, therefore, asked God for a revelation of His ultimate goodness, which would allow for a postponement and amelioration of the decree. For so grave was their sin that it required an extraordinary level of mercy. This level was hitherto unrevealed yet, and therefore one could not appeal for its implementation.

God therefore revealed His "entire goodness" before him. This gave Moses then (and us today) the ability to pray to God -- to appeal to His thirteen attributes of extraordinary kindness.

Those "Thirteen Attributes of Kindness" (referred to in verses Exodus 34:6-7) are the basis for our prayers on the Day of Atonement, on fast days and occasions for special solemn prayers.

The understanding of the Thirteen Attributes is another important aspect of Kabbalistic knowledge and teachings as will be explained in future installments of this series.

From the Desert to the Holy Land - Current Events and Kabbalah: Part 2
Olivia Newton John’s Grandfather was a Nobel-Prize Winning Jewish Physicist
Don’t Believe in Other Gods Versus God is One
Seeing Without Eyes
Comments
MOST POPULAR IN Spirituality
Our privacy policy
Aish.com Is Looking for Great Writers