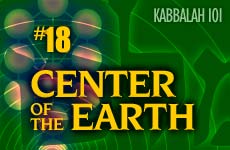 The sefirot of chesed, gevurah, tiferet -- kindness, strength and beauty -- have an interrelationship that serves as a model for understanding the relationships between the other sefirot.

We had described earlier that the Ten sefirot may be divided into three groups as follows:

Malchut, or kingship, stands by itself.

Each of the above groups may be divided into the right-handed, the left-handed, and middle.

Let us now examine this balance for chochmah, binah and da'at.

We explained before that chochmah consists of the ideas that one is inspired from "out of nowhere" or that which he has learned from his teacher. This corresponds to the creation of matter ex-nihilo, which is an act of chesed, an act that was not caused by anything.

Thus imagine a person who was sitting one day and an inspiration struck him that "life is sacred." This is now an addition of a new idea; it is completely formless and shapeless. The process of binah now begins to give it shape by qualifying and limiting the idea. Thus, "which lives are sacred," does "sacredness" apply to killing, or also to wounding, or also to humiliation? And "how much does one have to sacrifice in order to adhere to this dictum?" These are all questions that are gevurah/din or restrictive in quality. They cut and shape the boundless idea of sanctity of life.

Binah is an "opposing" force, whittling away bits and pieces of the chochmah, showing where the idea does not apply.

More sharply stated: binah is an "opposing" force, whittling away bits and pieces of the chochmah, showing where the idea does not apply.

da'at is then attained by combining the two. When a person has both the idea/ideal and its application, then he has a fleshed-out reality. da'at is not a compromise between the all-encompassing chochmah and the total challenge of binah. Rather, it is the complete vision which beautifully and seamlessly encompasses both.

An illustration can be given from a "Viewmaster," an old-fashioned "3-D slide" device. The 3-D effect is attained by having each eye view the same picture from a slightly different angle. As the mind struggles to rectify the conflicting images, it produces the 3-D image which satisfies both images. The 3-D image is the "real image" and the mind realizes that each eye saw only a section of the true picture.

The Maharal uses this point and elaborates on it. He quotes the Talmud which states that Jerusalem is the center of the world and that the Temple is located at the very center of Jerusalem.

Geographically there is a fairly simple meaning, because Israel is in the middle of the three continents (of Africa, Asia and Europe) that were known at the time the Talmud was written; of course Jerusalem is at the center of Israel and the Temple Mount at the center of Jerusalem. But it is clear that the Talmud is not engaging in a simplistic geographic braggadico.

What is meant by "center of the world," the Maharal explains, is that every form of "extremity" leads to evil -- not "extremity" in the simple sense of fanaticism, but, rather, viewing the picture partially.

If a person practices unadulterated and unconditional love, he sanctions the Nazis and nurtures murderers.

If a person practices unadulterated and unconditional love, he sanctions the Nazis, nurtures the murderer and encourages the manipulator, for he only gives and encourages. He never disapproves, condemns or punishes.

If on the other hand he is totally without mercy or quarter given, then he is just as bad. No one can be perfect forever, and if every failure is total disaster, then it is only a question of time for collapse to arrive.

Taking a one-sided approach to anything leads to evil and destruction.

THE PURPOSE OF THE TEMPLE

The Temple had two purposes:

Since all sins are caused by veering off towards any one side, then perforce the place of perfection and rectification is the "midpoint of the world." It is a point where all the different attitudes and approaches come together.

Both of these sides of the argument were grappling with the same issue. Man is amongst animals in his balance of different character traits. For instance, a sheep is sweet-tempered and will not "terrorize" anyone ever, while a pitbull might be the reverse. Each animal is locked into its nature, and cannot change. Each trait has its time of usefulness and times when its nature is an abstraction.

Man has balance: he can be as sweet and harmless as a sheep, or as ferocious as a pitbull.

But man has both: he can be as sweet and harmless as a sheep, or as ferocious as a pitbull. This is true of almost any character trait. (This is also true physically, as man can adapt to almost any climate or geography. He can live on the North Pole or the equator, the jungle or the desert ... even in New York.)

The question is: How was this ability incorporated in man?

One answer is that "God took earth from all four corners of the world," meaning that He incorporated in him every trait, ability and attribute extant in the world. The other answer states that more important is the incorporation into man of the "midpoint" of creation by taking land from the Temple's altar.

The ability to use all the different facets of creation lies not only in the possession of those facets but, more so, in possession of that "midpoint." The "midpoint" is not bound to any particular point but encompassing them all, and is capable of directing each and utilizing it in its proper time and place.

When We All Fall Asleep, Where Do We Go?
Deep Breaths
What Happened to the Truth?
The Japanese Everything Bagel Spice Recipe
Comments
MOST POPULAR IN Spirituality
Our privacy policy