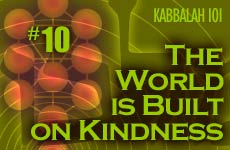 The fourth of the Ten Sefirot -- chesed -- precedes all others because it is the only one that is unconditional and unmotivated.

In the earlier parts to these series, we have explored the meaning of the first three of the Ten Sefirot, which we described as the attributes of the "intellect." We are now ready to explore the attributes of "action." The first of these is chesed, which is translated as "kindness."

Kindness is often thought of as being synonymous with niceness, but the connotation of chesed is much deeper than this. Chesed is properly described as an act that has no "cause."

When a person works for an employer, and then he gets paid, that pay is really a recycling of his own deed. Thus, the energy a stevedore expends in unloading boxes from a ship is recycled to him in the form of the money which he uses to buy bread. A chesed act, however, is an act which is not recycled -- for example, an anonymous gift to dedicate a scholarship fund.

An act of chesed act is that which is not recycled back, like an anonymous gift to charity.

Chesed is proactive –- it is the initiator of interaction, and must therefore be the first in the sefirot of action. Chesed deals with the level of visible, and in the chain of social dynamics is the primary spark that initiates subsequent action.

Being first is no mere hierarchical ranking. Being first carries within itself a property that no other element in the universe possesses. Every action in the universe has a cause –- except that which is the the first one. Within the sphere of visible action, chesed is without cause, a proactive expression of expansiveness.

The ultimate act of chesed is creation, an act that has no previous cause. The Psalms make this clear:

When we call creation an act of chesed, we are not only talking about creation ex nihilo, "out of nothing," in the purely physical sense. Rather, we are also referring to the interaction between God and man.

One may mistakenly think that once the world is already in place, its continuity depends on human merit. (We fulfill God's commandments and therefore we are rewarded.) None of this can be possibly true about creation. It was a unilateral act. No one "deserved" to be. It was chesed in the ultimate sense.

NO GROUNDS FOR LITIGATION

This point is a very fundamental cornerstone of our interaction with God. The person who does not thoroughly understand that the relationship with God is built on a foundation of chesed, engages in litigation with God arguing he had been somehow "short-changed." Thus, all the dramatic debates that literature has produced concerning man calling God to task are built on the assumed argument that God "owes us something."

A worker may rightfully litigate his employer and tell him, "you are not giving me my due pay for the work done, for behold Mr. X is doing the same work and he is being paid double." But an alms collector cannot logically make the same argument to a donor.

If a young person dies, he cannot make the argument to God: "You wronged me, I did not deserve this."

Understanding that creation is an act of chesed removes the ability of man to litigate with God. Thus, if a young and righteous person dies, he cannot make the argument "You wronged me, I did not deserve to die." No person ever merited his own existence; no one "deserved" to be born.

God's reply to Job's litany of complaints was: "Who preceded me that I shall have to pay him?" (Job 41:3) God, in effect, told Job, "You may question, but you cannot debate."

The underlying foundation of all existence is a gift. I owe you nothing. (There is, however, a valid form of questioning God's actions, which we will discuss in a later piece.)

This aspect of chesed -- that it is by definition ex nihilo -- has an important ramification with regards to all the range of activity that the Torah deems chesed.

While purity of motive is virtuous with regard to every mitzvah, it is intrinsic to chesed. As soon as there is a motivation "for something" -- be it honor or a future payoff -- it has ceased being absolute chesed. It is just another action in the long series of links in the cause and effect chain.

THE MEANING OF TRUE KINDNESS

Thus the act of burying a dead person is called chesed shel emes –- "true kindness." For any act of chesed that is accorded to a person during his life is never "pure," it carries within itself some of the complexities of human interaction. Maybe I owe him a favor and am uncomfortable in refusing him, or perhaps I like having him owe me one. While with regard to other mitzvot this would be a mere "blemish" on an otherwise fine deed, with regard to chesed, this corrupts its very essence. For chesed by definition is "something for nothing."

Any hint of a return corrupts the very essence of chesed.

This understanding of chesed will also clarify for us the special status accorded to one's parents and the fact that this is mentioned in the Ten Commandments.

One usually understand this as gratitude for all the favors and good that one's parents have bestowed on him. But what about the child who had a stormy relationship with his parents? Or what about the child that was given up at birth for adoption? According to Jewish law, the child must honor his biological parents as if they had been fully functional parents. Why?

The answer is that parents have done the only true chesed with the child, -- that is, giving him existence. Any other act of benefit to a child is an act within a previously existing framework, and is therefore of a much lower dimension. The gift of life the parents have given a child is a gift that cannot be compared to any other act of kindness toward him.

This is the reason that we are told that the honor towards one's parents is likened to respect towards God. For both have given the person his existence and this gift as such is worlds apart from favors, benefits, and other kindness bestowed on a person.

Let us sum up. Chesed is the first step of action. It is true that it is preceded by "thought" but as far as "deed" is concerned it is the first step. It is not a reaction to any previous deed. It is an act parallel to creation, an act ex nihilo. Chesed is also the one of the Ten Sefirot that describes the beginning of any relationship of God to man.