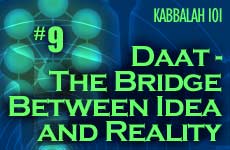 The third of the Ten Sefirot -- daat -- allows flashes of inspiration, once processed, to be brought to fruition.

We are now ready to understand the third of the Ten Sefirot dealing with the intellect -- daat, "knowledge."

After we have the germ of the idea (chochmah) and have developed it fully (binah), what else is left?

Let us think back to the Ten Sefirot. We explained that the sefirot are a process that is the unfolding of God's deeds in this world. Therefore the sefirot can to be pictured as an arrow with the actual deed being the final result. Daat is the tool of the intellect that get us into action mode.

Daat is the tool of the intellect that get us into action mode.

Let us illustrate. A person arrives at a university campus and speaks about an idea that has just occurred to him -- communism. (We are making believe here for the sake of the example). For Tom, a student who is listening, this idea is a flash of inspiration, a hereto unthought of concept -- a world where people work for each other and share instead of compete. This is the chochmah stage.

Tom debates and discussed the idea. Is it fair? Can it work? What are the details of such a society? This is binah.

Let us say that, he is both taken by the idea and convinced of its logic. Can one ask him, then and there, to become a revolutionary and martyr for the "cause"? No. When pressed for a reason, he will say, "Well, it's just an idea."

As time passes and more and more people are convinced of communism, publications sprout up and it becomes somewhat established, Tom will be ready to joint he movement. What changed? Did he gain more knowledge of insight?

No. What changed was that the idea became a concrete reality in his mind, instead of an abstract concept. This is daat.

Without daat, no matter how profound the idea, no matter how well developed it is logically, it will not turn to action. Daat bridges the awesome gap between concepts and reality.

Let us turn to the first usage of daat in the Torah to demonstrate this. The Torah tells us that Adam "knew" as a way of referring to sexual intimacy. But this is not meant as a mere euphemism. Rather, it accurately portrays that relationship. For marriage is a process where two people become acquainted with each other. As they grow closer together intellectually and emotionally they are becoming bonded, but their relationship is still not "concrete." When the bonding becomes a physical act, it is rightfully called daat.

Daat is used to describe a person whose knowledge of God is at the highest, bonding him firmly to the Divine.

Now we can understand better why the term daat is used to describe a person whose knowledge of God is at the highest, bonding him firmly to the Divine. The term connotes a relationship with the Almighty that is as real as a piece of matter that can be actually held in hand.

This is why daat is used to describe a prophet's connection to the Divine. A prophet is referred to "haskel vayodea Oti" –- as one who "perceives and knows Me."

In summary, we have explored the first three of the Ten Sefirot, which we have described as the three sefirot of the intellect:

Kabbalah 101
previous
Article #9 of 24
next
Like What You Read?  Give Jews around the world the chance to experience engaging Jewish wisdom with more articles and videos on Aish. It would make your mother so proud and as a nonprofit organization it's your support that keeps us going. Thanks a ton!

When We All Fall Asleep, Where Do We Go?
Where Are We? The Body, Brain, Soul Problem
Dr. Sheila Nazarian’s Escape from Iran
The Miami Boys Choir is Taking over TikTok
Comments
MOST POPULAR IN Spirituality
Our privacy policy
Aish.com Is Looking for Great Writers