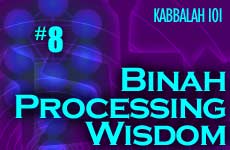 The second of the Ten Sefirot -- binah – is the womb where raw understanding is developed and processed.

In the last installment in this series, we have discussed chochmah or "inspired wisdom." We now come to the second of the Ten Sefirot, which is binah or "processed wisdom," also known as deductive reasoning.

We have a definition of binah in our non-mystical Midrashic literature which defines binah in the same way that Kabbalah defines it, and that is davar mitoch davar –- understanding one idea from another idea.

A person has an idea -- generated by chochmah -- and left the way it is, the idea is not really useful; it is raw. But then one begins to analyze it. What exactly are the parameters of the idea? What axioms is it based on? What are all the ramifications of this idea, and are they internally consistent? What are its applications?

In Kabbalistic literature the metaphor of a "father" and a "mother" is used to describe this relationship of raw idea to processed idea.

Just like a father sows a seed, so chochmah is a mere seed, an undeveloped code for potential.

Just like a father sows a seed, so chochmah is a mere seed. The father's seed is infinitesimally small, containing an undeveloped code that is mere potential.

It is in the mother's womb that it begins to develop. Every line of DNA code begins to become a human cell, a budding tissue, or a specific organ. Here is the ability to develop the germ of a human.

This relationship is also expressed in Talmudic literature:

The man brings home wheat and wool from the fields. Can a man eat wheat? Can he wear wool? The woman then takes this wheat and makes flour, then dough, and then bread. She takes the wool, spins it, weaves it, and sews it.

Thus we see that the woman develops the potential in every item. (Without stereotyping perhaps this explains the special talent in education that mothers possess, for they are capable of seeing potential in children, long after their father has given up on them.)

One more point about the metaphor of a father and mother. The original man -- Adam -- was created from "nothing." He started out as lump of clay into which was instilled the Divine breath. Thus the essence of the man is that he comes from "nowhere" much the same as chochmah does.

Eve, however, was taken from Adam. Her very existence demonstrated that she was a davar mitoch davar, an entity coming from something.

Adam seemed to be but one person, but it was then revealed that out of this person, another person could be carved out. Or put more correctly -- within this Adam there was latent an entire person, waiting to emerge.

The Bible then explains that this is the reason that a woman is called ishah for she was taken from man, ish.

WISDOM AND STUDY OF TORAH

Let us find the contrast between chochmah and binah in a very different area: the study of Torah.

The Talmud states that Torah was given to Moses to give to Israel. At that time Moses also received the art of pilpul, which translates roughly as the process of logically extrapolating new Torah laws from the existing body of law. Moses was not required to hand this skill to Israel, but out of his "good heartedness" he did so. Indeed, the skill became very useful because when Moses died, Israel forgot many laws, and these were restored through the pilpul process.

This teaching of the Talmud is actually a description of the role of both chochmah and binah in the study of Torah.

Torah is certainly an example of chochmah. It is an outside injection of God's wisdom into the world. Its validity is not because we understand it, but rather because G-d said it is so.

Torah simultaneously has an internal binah, which translates as logical extrapolation.

Yet Torah simultaneously has an internal binah. Given the basics one can use logical extrapolation and rebuild the rest of it. Even the mode with which pilpul was given to us reminds us so much of binah. Torah per se was given from God, but binah (i.e. pilpul) was passed onto us from the person who already had it! Much the same as the woman was created from the man who already was there!

Indeed for an outsider visiting a yeshiva, the method of study seems strange. On the one hand the students display a tremendous reverence for the Torah as being God's word. On the other hand, every point is meticulously debated with the keenest logical analysis possible. This is because Torah does indeed contain both components: chochmah bestowed from God and human binah developing it.

From the Desert to the Holy Land - Current Events and Kabbalah: Part 2
Don’t Believe in Other Gods Versus God is One
Seeing Without Eyes
Why Shouldn’t We Eat Whatever We Want?
Comments
MOST POPULAR IN Spirituality
Our privacy policy
Aish.com Is Looking for Great Writers